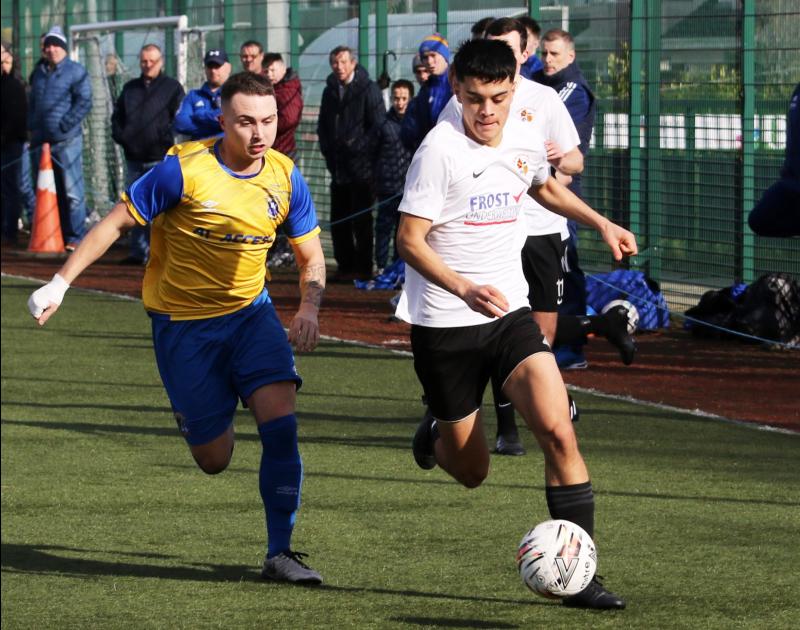 Aisling Annacotty's Michael Curran on the attack in their Premier Division fixture with Fairview Rangers at Annacotty on Sunday Picture: Brendan Gleeson

FEW of the spectators that remained in place after 87minutes of this Munster Junior Cup tie would predict the excitement that was to follow.

A game that failed to keep those watching remotely entertained suddenly turned on it’s head to produce enough entertainment to help us forget the preceding hour and an half.

Pike Rvs will be kicking themselves. They led the game thanks to a header from Conor Layng and had a couple of chances to wrap it up. They had Regional well corralled but as always in a one goal game, Regional got their chance and John McDonagh stunned the handful of Pike support still in place to send the game to an action-packed extra time.

That the game was poor fare can be put down in most part to the conditions. A swirling wind made it virtually impossible to play anything resembling attractive football.

It was a brave performance by Regional. Forced to line out with a much-depleted side, they dug deep to field a side and the players responded with courage aplenty.

They were on the back foot for much of the game but stuck to their task and got their reward in the end.

Andy Quaide was superb for the winners in a solid back three. Ahead of him, Ewan O’Brien was excellent while keeper Rob Shier, Kieran O’Connell and John McDonagh also stood out in a memorable win.

For all their possession, Pike hardly tested Rob Shier in the opening half. In fact, Gary Neville held a couple of efforts from John McDonagh and Sid Fletcher while at the other end Fletcher made a timely interception when Colin Daly threatened.

Pike broke the deadlock shortly after the restart. Eoin Hanrahan’s delivery caught up in the wind to wrong foot the defence and Conor Layng took advantage to send a diving header past Shier from eight yards.

Shier made a courageous block to deny Evan Patterson after a good run from the Pike wide man. The Regional net minder came to his side’s rescue again to deny Ger Barry and then went full length to keep out a long-range effort from Layng.

With time virtually up Willie Griffin battled for the ball wide on the left to send Ewan O’Brien in along the end line before crossing to Eoghan Burke and a lay off to McDonagh presented the chance to poke the ball in to send the game to extra time.

If Pike were disappointed at the late concession, they were rocked even further in extra time when Sid Fletcher delivered an inch perfect cross for Kieran O’Connell to head home from six yards to put Regional ahead.

Pike got the chance to equalise when awarded a spot kick but McGann’s effort saw Shier make a superb save. However, Pike kept at it and in the final minute Evan Patterson forced his way through to level.

Spot kicks followed and two superb saves from Shier saw United through to the next round where they will meet St Michaels.

Fairview Rgs took over top spot in the Premier League with a comfortable 3-0 win at Aisling Annacotty on Sunday morning.

With all other games postponed the Blues took the opportunity to open a three-point gap over Pike Rvs who have a game less played.

The result also more or less puts an end to Aisling’s hopes of sneaking in to win the title.

After their superb result against Carrick last weekend, Aisling were hoping that they were back to their early season form but they played second fiddle to their guests for most of the tie.

The deadlock was broken when Conor Coughlan was upended in the are as he latched onto James Fitzgerald’s pass. Steven Bradley expertly tucked away the resultant spot kick.

Coughlan was the provider again shortly after when he threaded a ball through for AJ Moloney to find the corner.

The scoring was wrapped up in the second half when James Fitzgerald delivered invitingly for Jeffery Judge to head home.