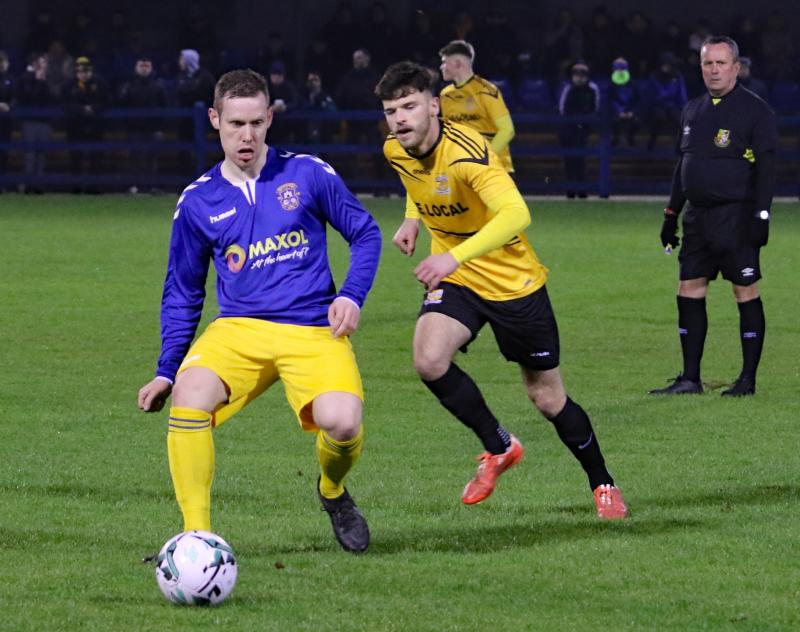 Steven Bradley, of Fairview Rangers, in control of the ball against Jamie Bradley, Clonmel Town, in their FAI Junior Cup clash at The Fairgreen on Saturday evening Pic: Brendan Gleeson

IT WAS a very good weekend for the three Limerick District League clubs in action in the last 32 of this seasons FAI Junior Cup as Regional Utd, Fairview Rangers and Pike Rovers all booked their names in the hat for the last 16 draw.

Without question, one of the results of the weekend was the Regional victory against Athenry.

Tom O'Connell's Dooradoyle-based side made the trip to the West on Saturday to face Athenry with the home side been installed as favorites to be victorious in this game.

This game was played on a pitch that was heavy and it got heavier as the game progressed.

Regional did settle in quickly and created their first chance of note ten minutes in as David Cowpar played a quick ball forward in which Kieran O'Connell flicked on to Ruairi Casserly whose snapshot just skimmed the angle.

Minutes later, at the opposite end Athenry's Dan Cunningham saw his 20 yarder well saved by Peter Healy in the Regional goal.

It was midway through this opening half that the deadlock was broken, and it was the home outfit who took the lead when John Keegan's probing ball picked out Dan Cunningham.

He then whipped the ball into the six-yard area and a Regional player deflected the ball to the net with Peter Healy having no chance.

This indeed was a setback for the visitors, but they regrouped and just prior to the break were unlucky not to get on terms when a move involving Andy Cowpar, Sam Ogundrare and Andy Quaid saw the latter’s quick-fire ball been latched on to by Euan O'Brien. However, his first time effort saw the home netminder effecting a good score.

On the turnover the game ebbed and flowed with the heavy under foot conditions playing their part. At this stage defenders on both sides were winning their respective battles with little or no direct chances on goal being created. But with eleven minutes remaining, Regional's David Lyons was upended in the area and from the resulting spot kick the ever-reliable Kieran O'Connell duly dispatched the penalty to the net to level this game.

The final minutes of the 90 saw no team go close and with that6 extra time was to be played.

In the two periods of extra-time that followed, both sides had an opportunity to grab a winner as firstly Regional went close through Ross Fitzgerald who found Euan O'Brien with a first time ball. O'Brien shimmied with the ball in the area and his cracker stung the palms of the netminder.

In the final minutes of extra-time, Regional's netminder Peter Healy was quickly off his line to deny the in-running centre forward.

The tie finished 1-1 with this game now going to be decided on penalties and in the shootout, it was Regional who advance 5-4 as all five players, Kieran O'Connell, Ross Fitzgerald, Samuel Ogundare, Graham Bourke and Euan O'Brien converted thier respective spot kicks as Regional notched up a really top class victory in what was an all-round team performance.

FAI Junior Cup holders Fairview Rangers hosted Clonmel Town on Saturday evening in the Fairgreen, and the Tipp outfit entered this clash full of confidence as they are going extremely well in their domestic league.

As cup holders, coupled with home advantage for this tie, the 'View were installed favourites to advance but in truth, they did not have it all their own way and Jason Purcell and Co will be more than pleased to have overcome this fixture.

Fairview got the perfect start as in the ninth minute they took the lead when from a corner on the right Conor Coughlan with a quick-fire short corner picked out Shane Duggan who, from the edge of the area, drilled a firm effort past a host of players with the ball nestling in the bottom corner.

With this good start for the cup holders many in the ground thought it would see the 'View kick on but, in fairness to Clonmel, they quickly regrouped and almost got on level terms when Rhys O'Regan raided down the left flank and his precise centre picked out Kyle Cuduy. However, his flashing header whizzed just wide.

On twenty minutes, Fairview’s Jeffery Judge linked up with Russel Quirke and his close-range effort was well saved by Evan Comerford in the visitors' goal.

Moments later, the next attack from the visitors saw Keith Guiry, Jack O'Donnell and Keith Cashman all involved as the latter’s sublime ball picked out O'Regan. However, his curling effort from the angle was just wide.

On the half hour mark, Fairview’s AJ O'Connor found Stephen Bradley in space as he then conjured up a well-placed ball for the in-running Conor Coughlan, but his shot was well saved by the netminder.

As the half progressed both wingers for Clonmel were proving to be lively causing trouble for the home rearguard.

Just past the half hour mark a neat inter passing phase of play from Fairview saw Jamie Enright, Jeffery Judge and Martin Deady all involved as the latter’s pinpoint centre found Conor Coughlan but his hurried shot did not trouble the netminder.

Moments later a snapshot from goalscorer Duggan was just wide as it remained 1-0 to the home side at the break.

On the turnover, this game never reached any great heights as the midfield battle was 50/50 as defenders were on top from both sides, so much so any that neither netminder had any save of note to make in the second 45.

PIKE Rovers made the trip to Kildare on Sunday afternoon and in fairness to Robbie Williams squad they impressed in this clinical 3-0 victory over their hosts.

Right from the off, the Hoops took control of this last 32 tie. Pike were quickly out of the traps as Stephen McGann linked up with Pat Mullins who cushioned a header into the path of Eoin Hanrahan who made no mistake from close range for 1-0.

The Crossagalla side doubled their advantage in the 19th minute as Conor Layng reacted quickly to latch on to a short back pass as he dually slotted the ball past the stranded netminder.

Pike Rovers rounded off an impressive first half with a 3 nil lead when Adam Lipper headed firmly to the net from a Colm Walsh-O'Loghlen cross.

On the turnover Pike were in control of all aspects of the pitch and played some delightful football, creating some openings but just not applying the finishing touch as in the end they were full value for this 3-0 away win.

IN the all-Premier clash Kilmallock with foals from Tommy Hefferan and Killian Hayes advanced on a 2-nil home win against Prospect Priory.

Athlunkard Villa were 3-0 away winners over Castle Rovers a brace from Mustappa and Christian Kerley saw them advance.

Premier side Nenagh eased by Kilfrush on a 4-1 score line those on the mark for the Tipp outfit were Saeed Ryan, Adam Ryan, Ryan Gilmartin and Alan Sheehan, with Keith O'Connor scoring for Kilfrush.