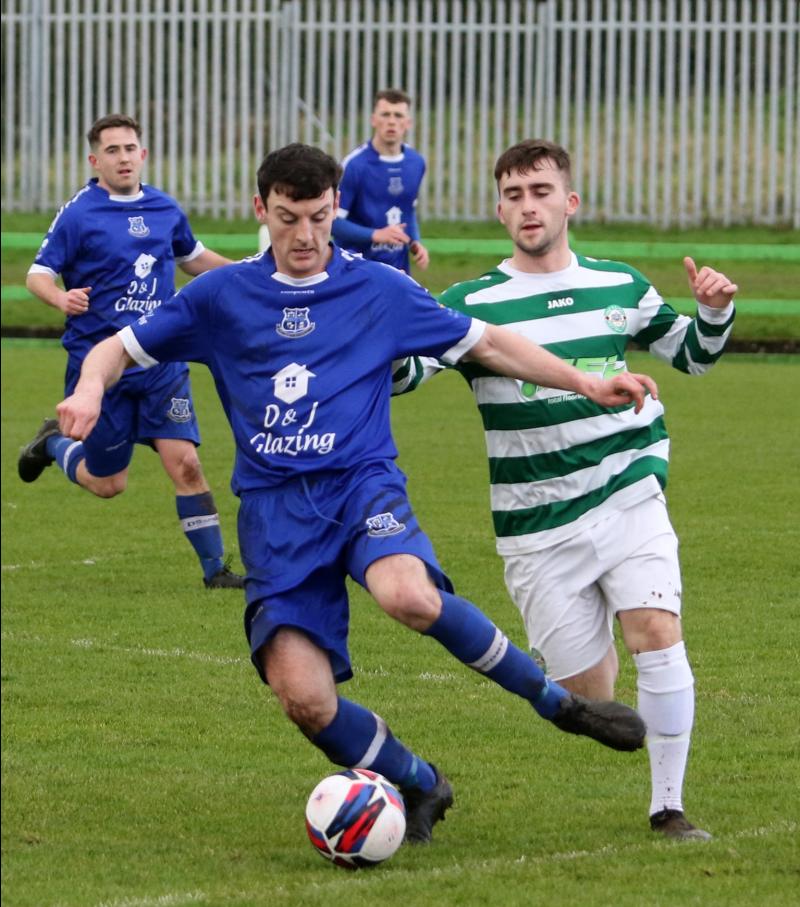 Action from the meeting of Pike Rovers and Ballynanty Rovers in the LDLs Premier Division on Sunday last Pic: Brendan Gleeson

THE FAI Junior Cup takes centre stage this weekend with Limerick's three remaining hopefuls facing difficult assignments as they vie for a place n the last 16 of the National competition.

Clonmel lie in second place in the South Tipperary League, five points behind St Michaels with a game in hand. They are unbeaten in ten league games and come into Sunday's game on the back of a 6-0 win over Cahir Park last Sunday.

Fairview were also six shooters last weekend when they beat Nenagh 6-2. The Blues have been playing well but the loss of Ross Mann will be a blow. Softening the blow, former St Michaels player Russell Quirke stepped up last weekend and claimed a hat trick in the win that saw Fairview go joint top in the Premier League.

Athenry lie second in the Galway Premier League with nine wins from ten games. Their only defeat was against leaders Salthill Devons, who beat them 3-0 last weekend.  This weekend they host Regional Utd. The Dooradoyle club were rocked last week with the departure of three key players, including leading scorer Jack Arra, to League of Ireland.

To their credit, Regional Utd's attitude is positive and their last-minute equaliser in last weekend's 1-1 draw with Aisling typified their fighting spirit. They will need all of that on show and more on Sunday. A win in the west would be a huge result against one of the fancied sides.

Kildare side Athy Town welcome Pike Rvs to town. Little is known about the home side, but no doubt will prove a stern test for the Hoops. Robbie Williams side lost for the first time this season last weekend and perhaps it might be perfect timing, allowing the side to correct any slippage in time for Sunday's encounter. Pike were unusually slow out of the blocks in Sunday's defeat to Balla, so expect that to change in Kildare.

The Lawson Cup continues apace on Sunday with five games down for decision. No doubt the big attraction will be all-Premier of Ballynanty Rvs and Aisling Annacotty. It will be the second time the teams will have met in three days as they also clash in the Tuohy Cup semi-final on Thursday evening in Jackman Park. Balla's win over Pike Rvs last Sunday will give them a lift going into the Tuohy cup tie, but Aisling have a squad capable of beating anyone.

There will be little between the sides in both games.

The top two in the Premier A League meet on Sunday when Carew Park host leaders Charleville. Carew suffered a rare defeat last weekend going down 2-1 to Moyross. They will have another difficult task on Sunday against a bang in form Charleville XI. Corbally Utd and Moyross are another couple of sides in good form which should provide an entertaining affair.

Division 1B is turning into an exciting title race with a host of clubs still in the running.  Leaders Caherdavin Celtic host Caledonians while challengers Mungret Reg host Charleville and Regional who visit Glenview Rvs.

In the Open Cup, favourites Aisling D travel to Meanus while Brazuca host Shelbourne B.

The top game in Division 2B is a Tipperary derby between challengers Nenagh B and Newport.