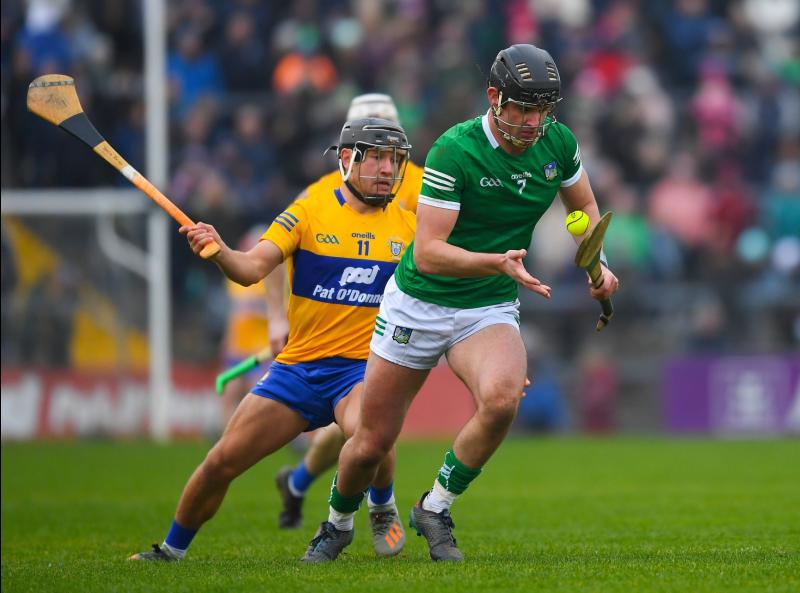 DAVID REIDY and Richie English stole the show as Limerick were crowned Co-Op Superstores Munster Hurling Cup champions thanks to an impressive 0-27 to 0-18 final win over great rivals Clare at a sold-out Cusack Park, Ennis on Sunday afternoon.

It is the third time the Treaty men have won the pre-season provisional competition with captain Barry Nash following in the footsteps of recent Limerick Munster League winning captains; Cian Lynch in 2020 and Paul Browne in 2018.

An early pre-season warm-up – the first of three trips to Cusack Park for John Kiely’s men ahead of their round four Allianz League trip to Ennis on March 6 and Munster SHC tie on May 8 – Limerick got off to a slow start but led by three points by the first half water break – 0-8 to 0-5.

Clare started the brighter of the sides and were two points up inside the opening seven minutes.

Colin Coughlan levelled terms in the ninth-minute with a superb effort from inside his own half.

A minute later, the Ballybrown half-back put John Kiely’s charges ahead for the first time, giving the Treaty men a massive lift with momentum suddenly swinging in Limerick’s favour.

Limerick got next three points, but Clare’s David Reidy stopped the rot with a 14th free for the hosts.

Limerick led 0-19 0-7 at half-time with David Reidy scoring eight of Limerick’s tally with seven of those coming from frees for the in-form Dromin-Athlacca man.

Limerick – who last won the Munster Hurling League in 2020 before the competition was cancelled last season due to the Covid-19 pandemic and changed to a knock-out competition this year – named four of the 15 that started last August’s All-Ireland final defeat of Cork.

The visitors made four changes to the starting team that defeated Kerry in the semi-final. Into John Kiely's team were All Stars Gearoid Hegarty and William O'Donoghue, along with Paddy O'Loughlin who made his first start since a February 2020 Allianz League win over Cork, and Dan Morrissey who returned to full-back instead of Jerome Boylan.

With Covid and Government restrictions having denied the majority of Clare and Limerick supporters the opportunity to see their team since March of 2020, the initial ticket allocation of 5,000 was sold out after just 45 minutes last Wednesday morning.

After restrictions were lifted late on Friday, the Munster GAA made announcement that an extra 3,000 tickets were to go on sale, with the early season provincial final deemed an 8,000 sell-out ahead of the 2pm throw-in.

After the restart, Clare reduced the deficit to 11 by the second water break, with Limerick’s points coming from David Reidy, Adam English and Brian O’Grady.

Credit to Clare, Brian Lohan’s determined side never gave up and outscored Limerick in the final quarter by six points to four. However, Limerick held out for a comfortable 0-27 to 0-18 win to take home the Munster Hurling Cup.

The nine-point victory was Limerick’s final run-out before attention turns to the Allianz Hurling League with a February 6 tie away to Wexford.