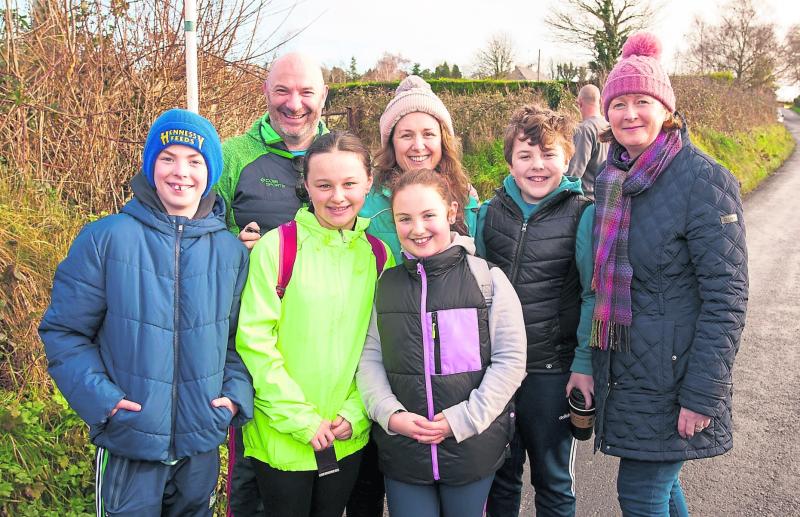 The Gleesons, Dromkeen, with the Duffs and the Murphys, Boher, at the Tom Walsh Memorial event Picture: Ian Horgan

Tom Walsh was a four-time County Senior Cross Country Champion and Irish International from Caherline. He would be proud of an event of this calibre being staged in his memory.

New course records were set in both Men’s and Women’s events as a high quality field attended from the region and beyond.
In a tightly contested race the Kilkenny City Harriers duo of Brian Maher- current National Masters Cross Champion and clubmate Ger Forde were neck and neck throughout.

In a sprint finish Maher won it in 30:35. He was closely followed by Forde in second in 30:37. Tudor Moldovan of Clonliffe Harriers, had also been in mix and he took third in 30:39.

The Women’s event was won by Irish International Siobhán O’Doherty of Borrisokane in a time of 36:11. Dee Collins, one of a large contingent from Ennis Track was second in 37:27. Two time previous winner Angela McCann was third on this occasion in 37:22.

The event started with a minute's silence to remember the horrific murder of recent Mary Immaculate College graduate Ashling Murphy when ‘out for a run’.

Athletics Limerick also wish to express it’s horror at this act it’s sympathies to Ashling’s family. Well done to Derek & Yvonne Casey, all the walkers, thanks sponsors, to pacers and all involved in an extremely well organised and well supported event.

Dooneen’s Shane O’Sullivan was 1st M40 in the 400m at the Tipperary County Indoor Championships in Nenagh Sunday last.

Well done to all who ran the Ballyhoura Moonlight Marathon and Half Marathon last Friday.

The ‘All Real’ sponsored Adare 10K takes place on Sunday 27th February at 1pm and is now sold out.