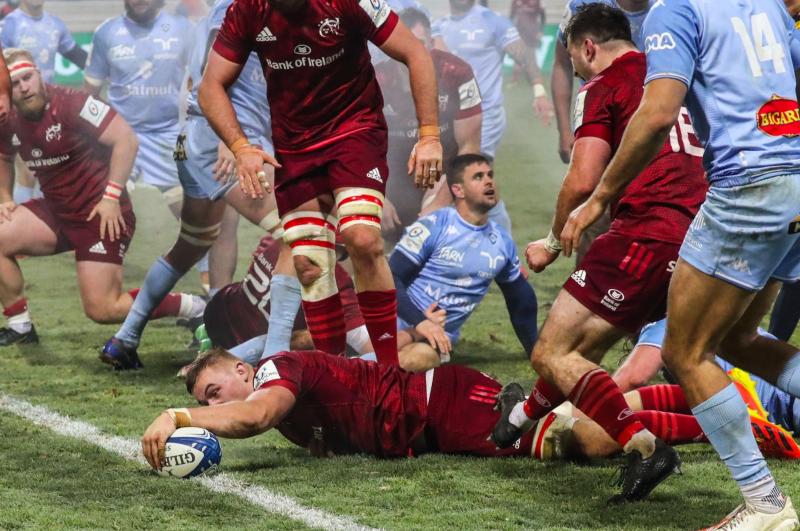 RESILIENT Munster Rugy secured their place in the knock-out stages of the Heineken Champions Cup after securing a dramatic 16-13 come-from-behind win over Castres Olympique at Stade Pierre Fabre on Friday night.

A 78th minute try from number eight Gavin Coombes, converted by out-half Jack Crowley, helped Munster secure a third successive victory in the pool stages of this season's Champions Cup and with it a spot in the last 16 stage of the competition.

No French side has managed to win at Stade Pierre Fabre in the Top 14 this season.

Munster took a first quarter lead through a Jack Crowley penalty after Castres were penalised for going off their feet at te breakdown and the young out-half duly dissected the posts.

Munster enjoyed the upperhand in a scrappy opening half an hour, but some good approach play was spoiled inside the Casres '22 by a number of unforced errors, including a couple of stray line-outs.

The home side hit the front in 27 minutes with the game's opening try following a moment of quality from out-half Ben Botica.

The fly-half dinked a delightful kick in behind the Munster defence off the outside of his left boot and Thomas Larregain dived on the ball to score.

Castres led 7-3 at half-time, but two penalty goals from young out-half Crowley helped Munster turn things around in the third quarter as the visitors earned a 9-7 lead.

However, the complexion of a very scrappy contest changed again when two Botica penalties helped the home side regain the lead at 13-9.

Ben Botica with a perfectly weighted kick through and Thomas Larregain pounces for Castres.#HeinekenChampionsCup pic.twitter.com/J5ew7Qs5Nb

Castres looked all set to secure their first win of this season's Champions Cup, before that late converted try saw Munster strike late to claim the four precious points on offer.