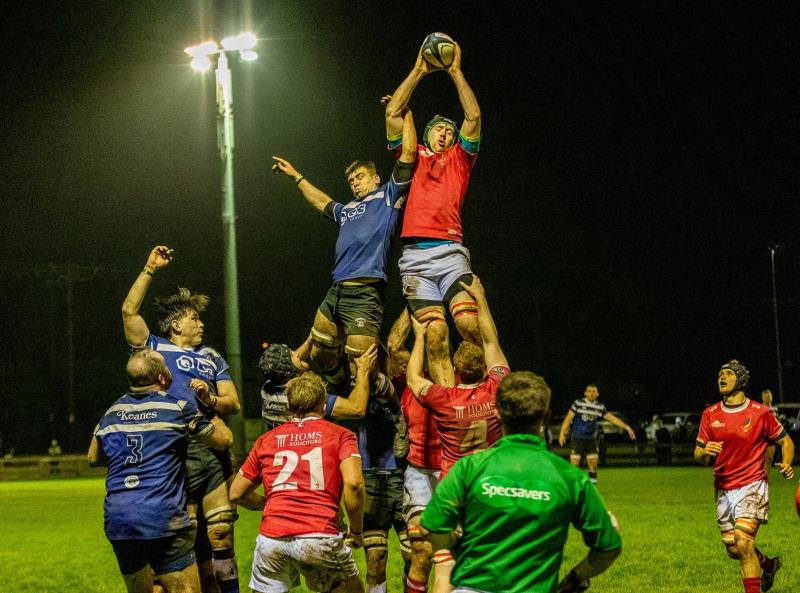 David Kinane, of UL-Bohemian, wins this line-out against Old Crescent in Division 2A of the All-Ireland League at Takumi Park on Friday night Picture: Kieran Ryan-Benson

Young Munster backed up their derby win over Garryowen seven days ago when easing past UCD 18-12 at Belfield in Division 1A. The result sees Munsters' leapfrog Cork Constitution into third place in the league table at the mid-point in the regular season.

Also in the top flight, Garryowen fell to their fifth defeat on the bounce when succumbing 0-17 at home to leaders Clontarf at Dooradoyle.

Garryowen have dropped from top spot after winning each of their opening four fixtures to now sit in seventh place in the top flight table.

In Division 1B, Shannon ended Highfield's eight-game winning league run when edging past the Cork side 6-0 on the back pitch at Thomond Park.

The result sees Shannon jump up to fifth place in the 1B table going into the Christmas break.

Bruff, who sit seventh place in the table half-way through the 18-game regular season, scored five tries in claiming an impressive victory over the Leesiders.

Young Munster completed the opening half of the season with their seventh win in nine All-Ireland League fixtures.

Munsters' led the contest with the students in Dublin 8-0 at half-time. Cian Casey, who made his AIL debut in Munsters' derby win over Garryowen, struck for a first half try for the visitors, while the ever reliable out-half Evan Cusack also added a penalty goal.

UCD hit back with a converted try in the 48th minute to trail by just a single point, 7-8. Munsters' regained the initiative five minutes later, however, when Cusack landed his second successful kick at goal of the game for 7-11.

The game remained very much in the balance until Mark O'Mara notched the Limerick side's second try late on. Cusack's successful conversion made it 18-7.

UCD did hit back with a late try through Dylan O'Grady, his second of the game, to gain a losing bonus point.

Munsters' will host UCD at Clifford Park in the next round of AIL games when the league resumes with reverse fixtures on Saturday, January 15.

Meanwhile, Garryowen's top four play-off hopes in 1A were dented when the Light Blues suffered a fifth successive league defeat as table toppers Clontarf held the home side scoreless in a 17-point defeat at Dooradoyle.

Garryowen had trailed 0-12 to the Dubliners at half-time. 'Tarf scored three tries in all through Cormac Daly, Tadhg Bird and Max Kearney, while Conor Kearns added one conversion.

Garryowen's last league win came on October 30 against Ballynahinch. The Light Blues will resume their AIL programme of games with an away date against Clontarf in the reverse fixture at Castle Avenue on Saturday, January 15.

Meanwhile, in 1B, Shannon were recording their second successive league win when overcoming previously unbeaten Highfield at Thoond Park following the Parish side's gritty success away to Malone in their previous outing.

Shannon, who won four of their fixtures during the opening half of the season, took the lead in the 23rd minute when John O'Sullivan slotted a tricky penalty in the windy conditions. A Highfield player was sin-binned for a deliberate knock-out in the awarding of the penalty.

The home side maintained their 3-0 advantage until half-time. Shannon grabbed their second points of the game in the 72nd minute when O'Sullivan converted his second penalty of the game.

Shannon will take plenty of positives from this victory, none more than managing to keep the visitors who had managed an average of more than 26 points in their previous eight league fixtures this season scoreless.

The sides will meet again in the reverse fixture at Woodeligh Park in Cork when the league resumes in five weeks' time on January 15.

Bruff will be pleased to head into the Christmas break on the back of a convincing victory over Sunday's Well.

The South Limerick side raced into a substantial 17-0 lead, thanks to tries from winger Mark Fitzpatrick, Kevin Treacy and Ross O'Brien-May. Full-back Paul Collins also added a conversion.

Sunday's Well hit back with 14 unanswered points to reduce the Bruff advantage to just three points, 17-14.

However, the bonus point try for the home side scored by Davy O'Grady helped Bruff regain the initiative. Collins also added the conversion for 24-14.

He added a penalty soon after to help Bruff into a 13-point lead, 27-14, before Jack O'Grady dotted down for Bruff's fifth try.

Collins' conversion helped Bruff into a 20-point lead at 34-14, an advantage the Kilballyowen side retained to full-time.

In Friday night's Division 2A Limerick derby, seventh-placed UL-Bohemian made it back-to-back wins in the league when easing past eighth-placed Old Crescent 28-17 at Takumi Park.