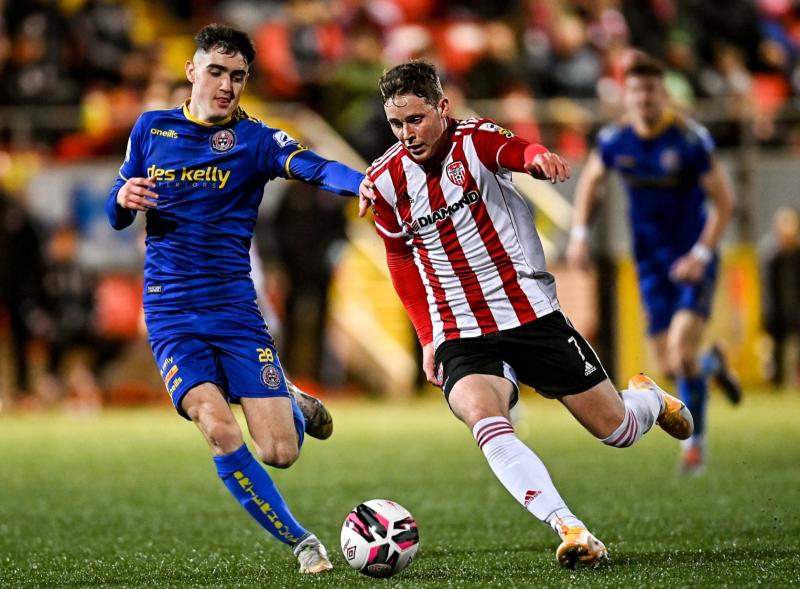 Will Fitzgerald in action for Derry City against Dawson Devoy, of Bohemians, during the SSE Airtricity League Premier Division match at the Brandywell in October

Twenty two-year-old Raheen man Fitzgerald is swapping life with Derry City at the Brandywell for a move to the Showgrounds.

Fitzgerald featured in all but one of Derry’s games this season, contributing seven assists over the year and continuing his fine career so far in the League of Ireland.

The Limerick man has played over 80 games in the league, having previously featured for his hometown club and Waterford FC.

Fitzgerald, who played his schoolboy football with Mungret Regional said: “I feel there is something very exciting happening here. I just couldn’t say turn it down when I spoke with Liam. I had such a good feeling that I knew it was the right decision to sign. The main takeaway from the talks we had was the style of football, and the philosophy that Liam has, and that it will suit me perfectly.

“I’m 22 now and I want to take on more responsibility and really make a mark. I’ve always backed myself and I feel I’m at the point now to take that next step and the development phase a player is coming to an end.

“For me the progress Sligo Rovers has made as a club and under Liam is only leading to one thing and that is challenging for trophies. I feel it’s a perfect match because I’m just so motivated to help the club and myself to get to the next level.”

Fitzgerald played against Rovers in one of his first appearances as a professional for Limerick in 2018, with the experienced of lining out in front of a 3,000 crowd staying with him.

Will Fitzgerald has become the first new signing for Sligo Rovers for the 2022 season.

The attacking player joins from @derrycityfc.

An accomplished winger, he feels the new environment will be an ideal setting for him.

“I play my best football wide right or on the left. I like to get one on one against the defender and there’ll be no better place than the Showgrounds when the crowd is behind you.

“One of my first memories as a player in the league was against Sligo Rovers on the opening day and the stadium was packed. I thought at the time how incredible it must be to be a home player with that backing.

“I know some of the group already, like Robbie McCourt, and it’s well-known what a great club it is. There is European football here which was another factor which helped in my decision but in truth everything was pointing to a move here.

“I’m just really excited to start and I want the 2022 season to be a really special one for everyone.”

Sligo Rovers boss Liam Buckley admitted he has been monitoring Fitzgerald for some time and is thrilled to get his man.

The 2022 squad now has 17 players as Buckley continues to build for the new year.

Liam Buckley said: “Will is a player who has been on my radar for a couple of years. I’m delighted we’ve been able to bring him to the club now.

“Will has so many great attributes. His crossing is excellent, he can run at players, he’s a great passer of the ball and overall he just has buckets of ability.

“He can play on the wing or centrally and with the ball at his feet he is a real danger. Will was with Derry last season and I think he has done well at every club he’s been at.

“I look at the overall group and I see so much potential improvement in the players we have. That is something to look forward to next season.

“Will fits into that category because he’s been a very good player in the league for a number of the seasons and he can be even better. We will give him that platform and he can make a real impact here.”