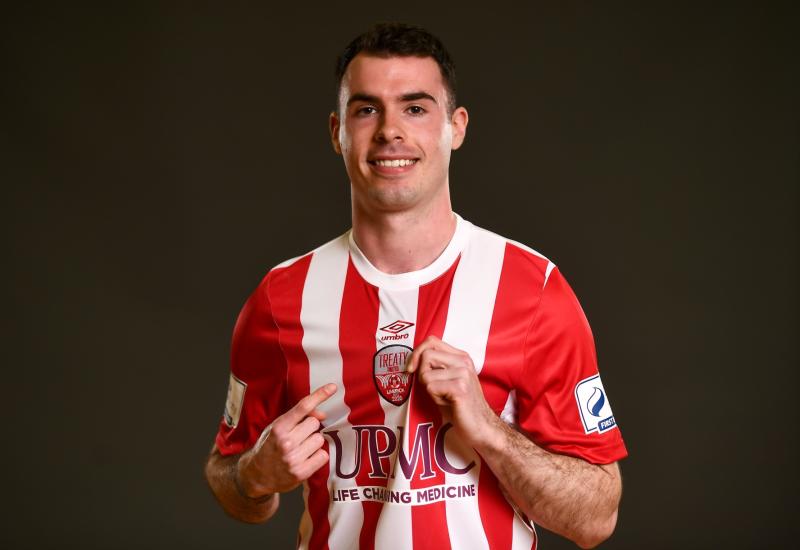 TREATY United have moved quickly to re-sign players and add some new ones ahead of the 2022 SSE Airtricity League First Division season.

Treaty have confirmed that 13 players have already been signed for next season, with more signing announcements due today, Monday.

Unlike last season when Treaty United manager Tommy Barrett had to rely on a hastily assembled squad for their inaugural League of Ireland campaign, the club has been able to retain the services of several key squad members well in advance of pre-season training beginning.

Another player to join for 2022 is midfielder Lee Devitt. Devitt joins Treaty off the back of two seasons with Cobh Ramblers and one with Limerick FC.

The club has confirmed that 2021 team captain Jack Lynch will be playing for the Markets Field-based side again next season. Lynch scored five goals and provided three assists as Treaty reached the First Division promotion play-offs.

Lynch is joined in re-signing by striker Kieran Hanlon who also scored five goals in 2021.

Among the other players to recommit to the club for 2022 is Killarney native Matt Keane and Newmarket-on-Fergus player Callum McNamara who made his first competitive start for Treaty in May before going on to make 22 appearances for the club.

Full-back Marc Ludden, who was included in the Professional Footballers Association of Ireland First Division Team of the Season will also line out for Tommy Barrett's side in 2022. Galway native Ludden enjoyed a fantastic first season with the Markets Field club as he scored a goal and contributed six assists during the season.

Fans' favourite Willie Armshaw, from Cappawhite, has also committed his future to Treaty after re-signing for the club. Defender Sean Guerins will also return for 2022 after making 18 appearances last season, while Stephen Christopher will also return to Treaty United for next season.

Joel Coustrain has also re-signed for the Limerick-based side for next season after making 20 appearances for the club in 2021. Also returning for the club's second season in League of Ireland football are right back Charlie Fleming and centre half/defensive midfielder Mark Walsh from Nenagh.

Meanwhile, Treaty United have been drawn at home to fellow SSE Airtricity League First Division side, Waterford FC in their quarter-finals of next season's Munster Senior Cup. The fixture is due to take take place on/before February 5-6.