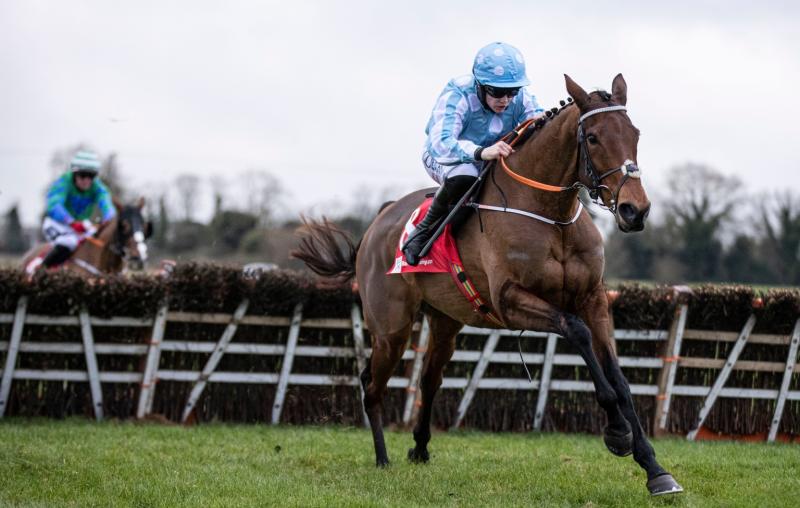 BALLINGARRY jockey Billy Lee maintained his good form at the Dundalk winter meetings with another winner at the track on Wednesday. He teamed up with County Meath trainer Sheila Lavery, who won two of the last three races on the card, to take the two-mile handicap with 7/1 chance Annecherie.

Owned by Llewelyn Runeckles Partnership, the three-year-old scored by a length from the Denis Leahy-trained 100/1 chance Kalu Pande.

Honeysuckle just gets better and better and she landed the Grade 1 Baroneracing.com Hatton’s Grace Hurdle for the third straight year with a most impressive display at Fairyhouse on Sunday.

Once again, the unbeaten star of National Hunt racing was on the receiving end of a most confident ride from Rachael Blackmore who sent the 2/5 favourite clear before the second last hurdle to win by eight lengths from the Matthew Smith-trained Ronald Pump with Gordon Elliott’s Abacadabras in third place.

Winning trainer Henry de Bromhead said, “She probably gave me a fright in this race last year so maybe we did a little bit more this year for it. I let a lot of my horses progress but when you have only so many runs, we had her pretty straight today.

"She is an incredible mare and to be associated with her is amazing, and the reception she got was unbelievable.

Touch wood she'll be okay and I think she will go for the Irish Champion Hurdle at Leopardstown in February now. That has worked for us before and we can back off her now for a few weeks and prep her for that.

"Rachael made the point we had run her on quicker ground but that was at the start of her career. But everyone was happy today's ground was safe and it is fantastic to have Kenny Alexander and his family over as well and it's amazing.”