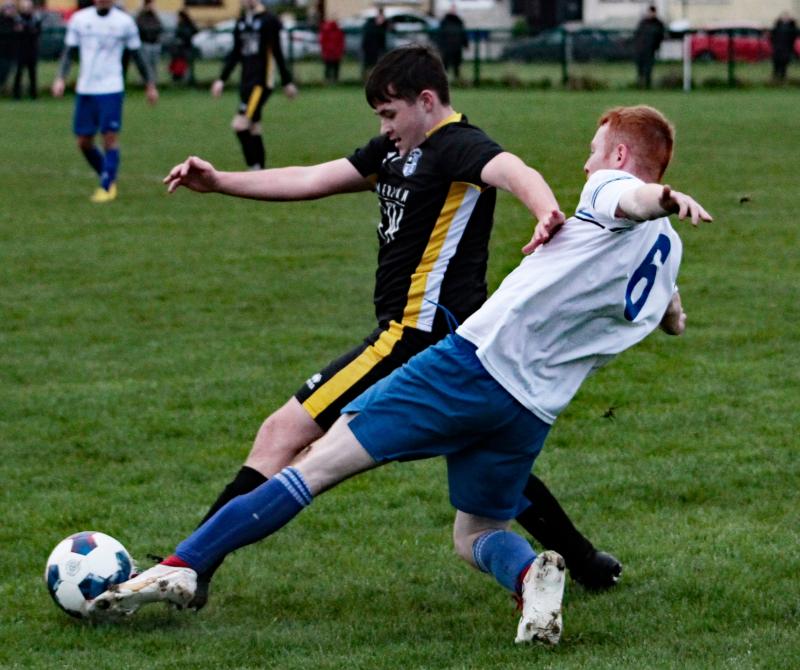 STAR Rvs bowed out of the FAI Junior Cup, going down 4-3 on Sunday afternoon after a thrilling encounter with Clare Premier outfit Ennis Town in Lee Estate. Star seemed to have done the hard work after fighting back from two down to level and again when they fell 3-2 behind.
However, the visitors seemed to have that extra ounce of stamina in the final minutes and grabbed the crucial winner.
It was a fine performance by the Limerick side, who ply their trade in Division 1A of the Leagues. They were the better side over the 90 minutes and with a little luck would be in the hat for the next round.
Star were pumped up for the game but the air was left from their tyres when Thomas Collins headed Ennis in front with their first foray into the Star danger zone.
The home side steadied the ship and had a number of good chances that fell just outside the target.
It was a further blow when Conor Meaney scored a good goal to double the visitors lead before half time.
After the restart, Star continued to set the pace with Brain Purcell and Jason Daly becoming more prominent.
Star eventually got reward when Jason Daly fired home from a 25-yard free kick that bounced awkwardly in front of keeper Andrew Skerritt on its way to the net.
Star could smell blood and they went all out for the equaliser. When it looked like Ennis would survive the assault, Brian Purcell took off on a determined run on the right and played an inviting ball across the face of goal for substitute Brian Thompson to score from close range.
Star tuned out momentarily and paid the price when a poor kick out presented Lee Clohessy with an opening and he fired over keeper Diarmuid Whelan to restore Ennis’ lead. Star were not done however and minutes later another 25 yard free kick saw Daly step up and repeat the feat by firing low under the keeper to tie the game at 3-3.
Both teams were out on their feet in the final minutes when, agonisingly for the home side, a ball across goal saw Jashar Aliu step to allow Clohessy a free shot on goal which he finished in style.
Although defeat was their lot, Star gave further evidence that the club is heading in the right direction and attention will now turn to the chase for promotion.

Oliver Bond Celtic 2 Ballynanty Rvs 1
IT was last minute heartbreak for Ballynanty Rvs on Sunday when they went down to Oliver Bond Celtic on a 2-1 scoreline.
On another day Balla would have coasted to victory in a game in which they struck the home crossbar three times.
As is often the case in such games, Balla paid the price for squandering so many chances when, twenty minutes from time, Willo McAdams fired the Dublin side in front from a 20-yard free kick.
To their credit Balla responded perfectly and got their reward five minutes from time when Adrian Power equalised.
With Balla preparing for extra time, a cruel slip in defence gave Celtic an opportunity deep in injury time and Chris Clarke struck to secure a most fortunate win.
Back to the drawing board for Balla, but still much to play for this season.