Black Saturday for Limerick clubs in the All-Ireland League 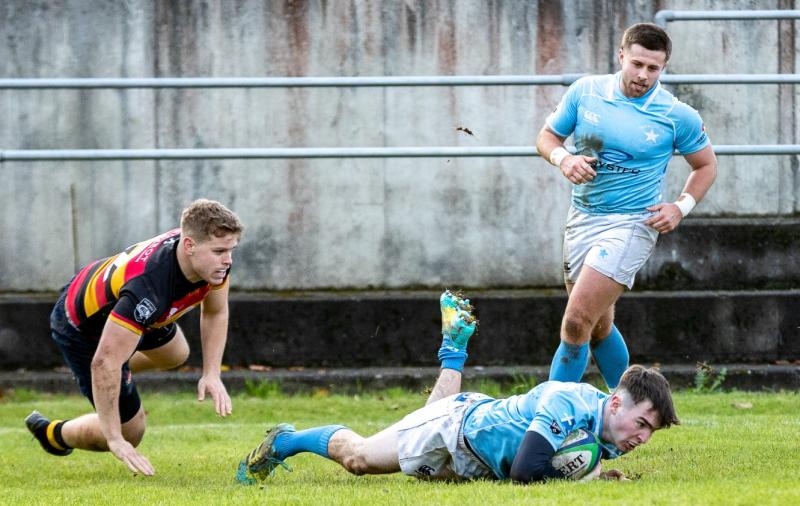 Winger Colm Quilligan touches down for Garryowen FCs only points in their All-Ireland League Division 1A defeat to Lansdowne at Dooradoyle on Saturday Pic: Kieran Ryan-Benson

IT was a black Saturday for Limerick clubs in the Energia All-Ireland League as all six of them suffered defeat.

In Division 1A, both Young Munster and Garryowen shipped heavy defeats in their respective round seven fixtures.

Fourteen-man Young Munster suffered a 38-3 defeat to Dublin University at College Park to drop to fourth place in the table, behind third-placed Cork Con on points difference.

Munsters' played with 14 men for the entire second half after having a player red-carded in the opening period for what was deemed to be a dangerous tackle.

After Munster's took a 14th minute lead through and Evan Cusack penalty, the Dublin students hit back to lead 7-3 at half-time thanks to a converted try.

Dublin University made the most of their one-man advantage in the second period, running in five more tries, to stretch clear and secure a bonus point success.

Next up for Munsters', who have now lost their last two league fixtures after opening their campaign with a five-game winning run, is a crucial Limerick derby meeting with Garryowen at Clifford Park on Saturday next, 5pm.

Garryowen succumbed 29-5 at home to an impressive Lansdowne outfit at a bitingly cold Dooradoyle to slip down to fifth place in the table.

This was the Light Blues third defeat on the bounce after the Limerick side had won their opening four league fixtures.

Garryowen paid a heavy price for a slow start to the contest, falling 13-0 in arrears inside the opening half an hour after conceding two tries.

A well-executed try from winger Colm Quilligan shortly before half time gave wind-assisted Garryowen hope to turning things round in the second period.

However, it was Lansdowne who proved the better side after the restart adding 16 unanswered points, including scoring two further tries to secure a bonus point, as the home side saw their error count rise as they chased the game.

Garryowen's cause was also not helped by some poor discipline as the penalty count against them started to rise.

The Light Blues failed to score in that second half as second-placed Lansdowne eased clear to record a convincing win.

The defeat adds even further to the significance of next Saturday evening's big derby clash with Young Munster at Clifford Park.

Meanwhile, in Division 1B, fifth-placed Shannon took two bonus points from their 35-29 defeat to Naas on the back pitch at Thomond Park.

Shannon dug a hold for themselves in the opening half after which they trailed their Co Kildare opponents by 19 points, 10-29.

The home side, who had trailed 0-17 in that opening period, managed two first half tries through Lee Nicholas and Darren Gavin.

The home side drew with 10 points of their visitors, 22-32, and secured a try bonus point when Nicholas dotted down for his second try of the game in the 71st minute, with John O'Sullivan converting.

Naas increased their lead with a late penalty goal, before a fifth Shannon try in added time, this time scored by Killian Dineen and crucially converted by O'Sullivan left six points between the sides at full-time.

In Division 2A, seventh-placed Old Crescent suffered a heavy 40-19 defeat at home to Cashel at Takumi Park.

Three first half tries had the Tipperary side 19-5 in front at half-time, with Crescent's points coming from a Val McDermott touchdown just before the break.

Cashel grabbed the bonus point try 15 minutes into the second half to lead 26-5.

To their credit, Crescent rallied and two converted tries, scored by Daniel Hurley and a second of the game from McDermott, with both converted by Ronan McKenna. That un of 14 unanswered points had the Limerick side within losing bonus point range at 26-19 with a quarter of the game to go.

However, two converted tries from Cashel on the 61st and 70th minutes put the game well beyond Old Crescent.

The Rosbrien, who have won just two of their seven AIL fixtures to date, make the short time to New Ormond Park to take on bottom side Nenagh next Saturday.

Also in 2A, UL-Bohemian shipped a heavy 40-8 defeat away to Queen's University Belfast.

The Belfast students had led 21-3 at half-time.

Bruff had led the game 10-0 at one stage in the first half with Jack O'Grady crossing for a try, while Adam O'Dwyer added a conversion and penalty goal.

However, Tullamore rallied to draw level at 10-10 before Bruff hit the front 13-10 with a penalty goal.

However, the Offaly side won the day with two penalty goals as Bruff had to make-do with taking a losing bonus point from the game.

Bruff face a trip to Wexford next weekend to take on Enniscorthy.