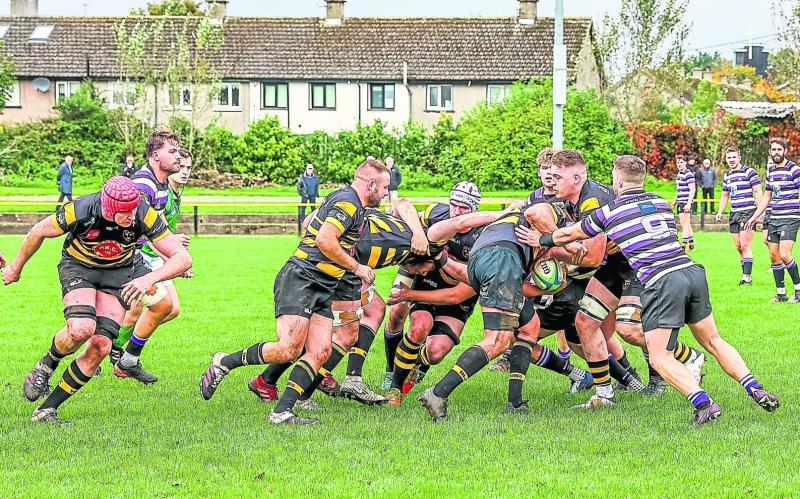 Young Munster's pack powers forward with a maul in their All-Ireland League Division 1A fixture with Terenure College at Greenfields Pic: Kieran Ryan-Benson

THE Energia All-Ireland League resumes this Saturday when five Limerick senior clubs will all go in search of precious wins.

In Division 1A, table toppers Young Munster host Clontarf at Greenfields at 2.30pm.

Munsters' made it five wins from five in the top flight and moved top of the table thanks to a hard-earned 19-9 victory over UCC at the Mardyke last time out.

Saturday's opponents Clontarf sit in fourth place in the table, just three points behind their hosts this weekend.
Meanwhile, also in 1A, second-placed Garryowen will look to get back to winning ways when making the trip to Dublin to take on Terenure College at Lakelands.

Garryowen lost their 100% record after four games when losing out 21-23 to Munster rivals Cork Constitution in a high quality contest at Dooradoyle last time out.

In Division 1B, the scheduled clash of fifth-placed Shannon with Navan at Balreask has been called off due to a Covid-19 issue.

Shannon confirmed via social media that 'Following discussions between the IRFU and Navan RFC, and following the process put in place around matches affected by Covid 19, the Energia AIL match Shannon v Navan which was due to be played this Saturday, 20th November, has been called off.

'Both teams will receive two points each and a 0-0 score shall be entered.'

Following discussions between the IRFU and Navan RFC, and following the process put in place around matches affected by Covid 19, the Energia AIL match Shannon v Navan which was due to be played this Saturday, 20th November, has been called off. pic.twitter.com/mt8DuPJ0hp

The result leaves Shannon, who have won two of their five opening league games, in fifth place in the table, 9 points off joint pacesetters Highfield and Old Wesley.

Meanwhile, in Division 2A, Old Crescent travel to Parsonstown to take on fourth-placed MU Barnhall. Old Crescent recorded their first win of the campaign last time out when scoring a precious 33-12 bonus point win over Dolphin at Takumi Park.

The eighth-placed Rosbrien side laid the foundation for this win in the opening half after which they held a 21-0 advantage.
Old Crescent sit two points ahead of bottom side UL-Bohemian in the table.

UL-Bohs have a home fixture against Rainey Old Boys at UL this Saturday.

UL-Bohs, with just one win their opening five league games, picked up a losing bonus point in a 24-17 defeat away to Buccaneers.

In Division 2C, Bruff make the long trip to the Thomas Mellon Playing Fields to face Omagh Academicals.
Bruff moved up to a more comfortable sixth place in the table after recording a thumping 38-15 bonus point win over City of Derry at Kilballayowen Park last time out. It was their first win of the campaign to date.