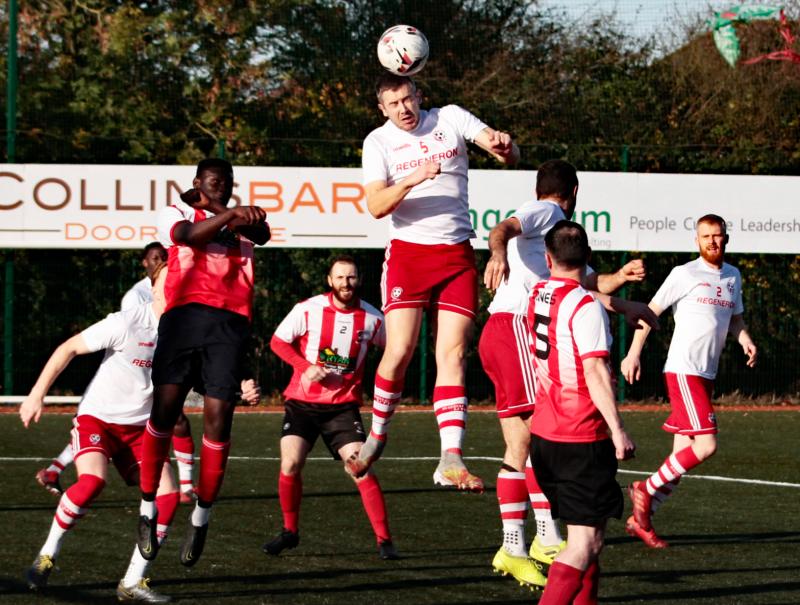 Aisling Annacotty D 0 Ballynanty Rovers 3
Despite plying their trade in Division 2B, Aisling’s D team gave Ballynanty Rvs a real battle before the Premier side secured their progress with two late goals.
The in-form Adrian Power put Balla ahead after great work by Conor Ellis but the home side, led by Brian Butler, proved a stubborn and talented bunch that gave as good as they got for most of the game.
The game was still in the melting pot until the 80th minute when Eddie Byrnes unselfishly teed up Power came up trumps again firing low to the corner to double Balla’s lead.
With time running out, Power turned provider when Eddie Radcliffe tacked on a third to give a harsh slant on the game.

Fairview Rgs 9 Hyde Rgs 3
Joint leaders in the Premier League, Fairview Rgs ran up a big score against a game Hyde XI on Friday evening.
As if it wasn’t hard enough for the visitors, Hyde had to field without a number of key players.

They gave a good account of themselves, trailing to Mark Slattery and James Fitzgerald goals at the break.
After the restart Conor Coughlan with a quick double put the contest to rest.

Ben Kennedy pulled one back for Hyde and with a little luck could have added another couple before an AJ Moloney double made it 6-2 Eoin Duff, Jeffery Judge and Ross Mann added further scores for the home side while Hyde added another couple of goals courtesy of Evan Shine and Steve Fitzmaurice.

Prospect Priory 0 Pike Rovers 6
Going into Sunday’s games, there was a three way tie at the top of the Premier League table, but Pike had a game less played than their rivals Fairview Rgs and Aisling Annacotty.

That was rectified at Cals Park on Sunday when hit Prospect for six to take a three point lead over the chasing pack.
No doubting hero of the hour as striker Conor Layng scored four of his side’s tally. Colm Walsh O'Loughlin and Steve McGann made up the haul.

Regional Utd 3 Geraldines 0
Regional Utd piled the misery on for Geraldines, inflicting another defeat for Derek Hannon’s men.
It was an improved display for the visitors but they were still second best.

Willie Griffin headed in the opener from Sean Madigan’s corner kick in the first half.
A cracking 25 yarder from Ewan O'Brien just after the hour mark doubled the lead and Evan O'Connor completed the scoring from another set piece.


Kilmallock 1 Janesboro 6
Janesboro continued progress under Daithi O’Donoghue was evident on Sunday when they hit relegation haunted Kilmallock for six at the county venue.

It was a case of top versus bottom and so it was obvious from the off.
Steve McGann and Conor Layng claimed three goals apiece. Ger Barry scored twice and
Colm Walsh O'Loughlin made up the tally for Pike, who saw Pat Mullins make a welcome return to action.

There was no luck for LDL sides in the FAI Under 17 Cup.

Goals from Matt Te Pau (3) and Josh McCarthy (2) were not enough for Fairvview who fell 6-5 to Parkville in Navan while Newport also exited by a single goal, going down 3-2 at home to Carrigaline. James Kavanagh and Aaron Coleman scored for Newport.

Premier A League leaders Fairview B were not in action, allowing Charleville and Carew Park to close the gap at the top of the table. Should Fairview finish in the top two, they will be unable to take up the Premier spot and would mean third placed side would make the step up.

In Lee Estate, Ciaran Carey headed Charleville in front before Shane Dillon tacked on the second. Athlunkard Villa responded when Lorcan Feeney pulled one back but the Cork boys held on for three points to keep them in second spot.

In Division 1A, Granville Rgs opened up a six point lead following a 1-0 win at Summerville Rvs. Aaron Madigan scored the vital goal.

Star Rvs continue their good run with a 5-1 win over Kilfrush. Jason Daly chipped in with another brace with Jordan Boland, Eoin O'Regan and Adam McInerney also netting.

Division 2A leaders Janesboro B were coasting 4-1 at home to Meanus thanks to goals from Jamie Cross 2, Jeffery Dore and Brian Nugent. However a superb comeback by the county boys saw them take the spoils on a 5-4 scoreline. Con Burke, Nigel Roche, Anthony Punch, Peadar McCarthy and Brian Sexton were the winning scorers.

Wembley go joint top after a 4-1 win at Hyde Rgs B. Craig Casey scored for Hyde but goals from Dave Power, Diarmuid O'Callaghan 2 and Bryan Sheehan won it for Wembley.

Goals from Adam Stuart, Eric O'Neill and Niall McGrath gave Lisnagry A the points at high flying Nenagh.
James Crotty 2, Jamie Collins and Tristan O'Sullivan were on the mark for Lisnagry B who ended all square with Dromore for whom Paul Franklin, Dean Kerley, Colin O'Gorman and James Murtagh netted.

Division 3A leaders had to come from behind to win 3-2 at Granville Rgs B. Damien Carmello, Darren Hanley and Kevin Barry were the winning goalscorers.

Mungret Reg D continue to improve with a 5-0 win over Summerville Rvs B. Goals from Barry Danaher 2, Dion O'Dowd 2 and Danny Galvin did the business.

In Division 3B, Ballynanty Rvs B now enjoy an eight point lead after a 5-0 win over Parkville. Barry Quinn 2, Gary Moore 2 and Dean O'Brien were on the mark for the winners.