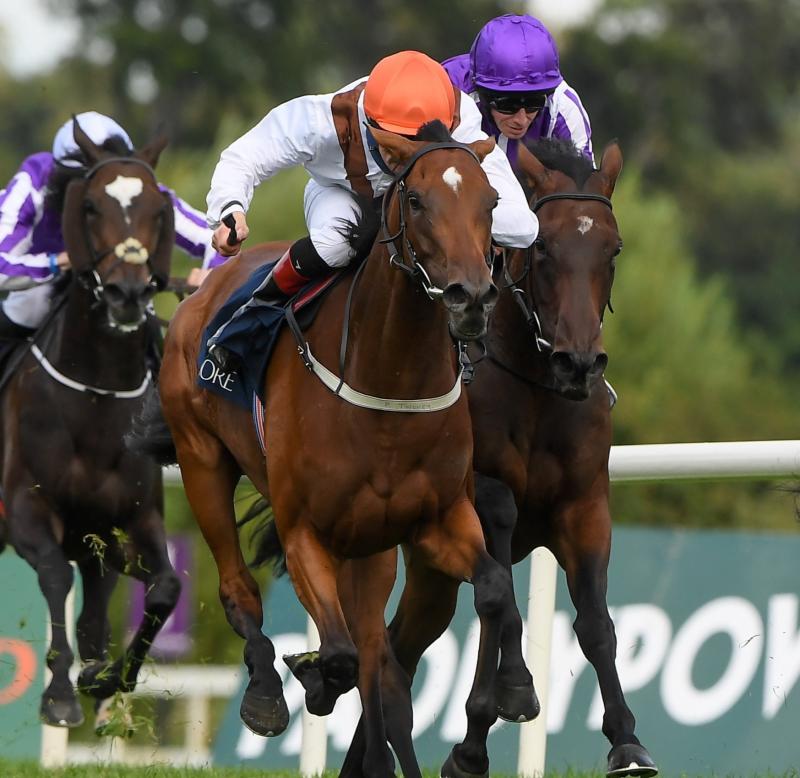 Pearls Galore, orange cap, and Limerick jockey Billy Lee on their way to finishing second in the Matron Stakes at Leopardstown in September

A LIMERICK jockey is dreaming of Breeders' Cup glory at Del Mar, California this Saturday night.

The race is due off at 10.20pm Irish time and will be shown live on ITV4, Racing TV and Sky Racing.

Pearls Galore filly has gone close in Group One company on her last two runs, most recently in the Prix de la Foret in France when she finished behind Space Blues at Longchamp.

Prior to that, Pearls Galore took the same position in the Matron Stakes won by No Speak Alexander at Leopardstown, having picked up Group Three prizes at Fairyhouse and Tipperary along the way.

Thirty five-year-old Billy Lee rode his first winner on the track aboard the Tommy Stack-trained Zeno at Sligo in August, 2002.

Lee was a promising rider over hurdles back in 2005/6, with the highlight coming on the Tommy Stack-trained Wanango in the Listed Gordon Plant Memorial Newton Novices' Hurdle at Haydock.

Not long after that, however, he refocused his attentions on the Flat with tremendous success.

Lee recorded his first Group 1 win on Fiesolana, trained by Willie McCreery, in the Matron Stakes at Champions Weekend at Leopardstown in September, 2014.

He has enjoyed a great number of high profile victories. Billy rode his first Royal Ascot winner in the Britannia Handicap aboard the Joanna Morgan-trained Roca Tumu.

The Breeders' Cup is now a two-day, 14-race celebration of the sport of horse racing which attracts the top horses from all over the world. The Breeders' Cup kicked off with Future Stars on Friday, comprised of five juvenile races featuring horse racing's brightest rising stars.

Today, known as Championship Saturday, is one of the richest days in racing awarding over US$22 million in purses and awards over 9 races, culminating in the defining event of the international racing season, the US$6 Million Breeders' Cup Classic.