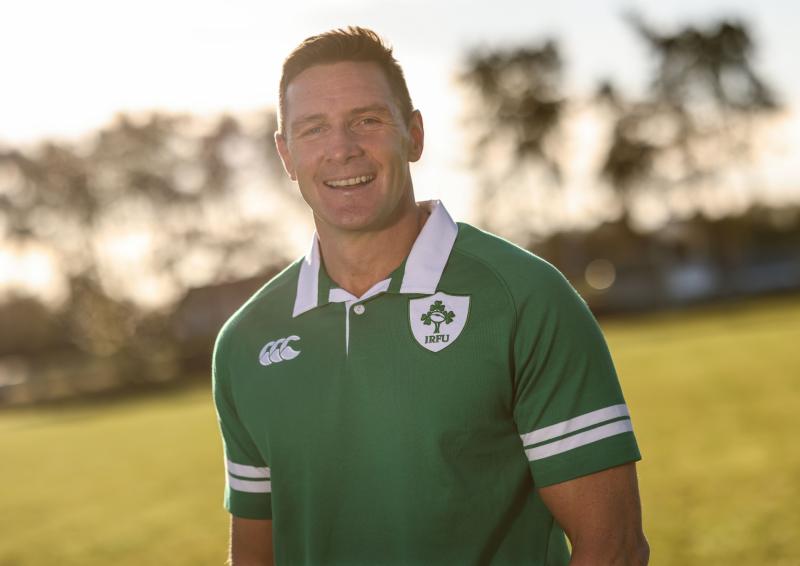 David Wallace at the launch of the new Canterbury Ireland Rugby Heritage Jersey. The jersey is available now in Intersport Elverys stores and via Elverys.ie and Canterbury.com

The former Munster, Ireland and Lions flanker was speaking with media this Thursday morning to launch the new Canterbury Ireland Rugby Heritage Jersey.

Andy Farrell's Ireland face Japan, New Zealand and Argentina across their Autumn Nations Series this month and Wallace is hoping that 23 year old Coombes, who isn't selected against Japan, will get a chance to add to his international appearances.

"Gavin Coombes in Munster I think is a special kind of player. He breaks the mould a little bit amongst the backrow - just his ability to get those hard yards won and his carrying and he has a massive engine too for such a big guy," outlined Wallace, who was speaking ahead of confirmation of the line-up to play Japan.

He explained: "The rate of tries that he is scoring speaks for itself - he gets over the gain line where other players can’t and is unique in the backrow in that sense".

"I know Jack Conan has probably got in front in the international jersey but I would love to see Gavin get a run of games - maybe a game and a half or something like that. I certainly think he is the real deal," praised Wallace.

However, Wallace accepts that the backrow is among the most competition sectors in Andy Farrell's squad.

"In my day it was no different - even just getting into the Munster team was difficult! There was a bevy of internationals ahead of me - I remember one day at training and I wasn’t in the Munster team at this stage but was close to it, probably 1997-98 time period, and I just looked at the lineout and there was Anthony Foley, Alan Quinlan, Eddie Halvey and all internationals playing for Ireland and David Corkery would have been there and I remember going If I break into this backrow I am half a step away from an international team too," he recalled.

"We have always had strength in depth there at international and provincial level - it’s incredibly strong and of course now you have hybrid second rows as well, who can go into the backrow which makes it all the more challenging. We are going to need it because it is a challenging seven or eight months up to the New Zealand Tour. You are really going to calling on all squad members through this next year. All of them are a hair’s breadth from each other."

However, Wallace does identify "a few standouts" but "hopefully we will see a few of the younger guys get a run over this campaign".

Josh van der Flier is “absolutely excellent the past 12-months” and "he has probably nailed on that position for a bit", said Wallace.

He added: "Obviously Jack Conan did brilliantly on the Lions Tour."

Peter O'Mahony, who is among the replacements against Japan, is another Munster man not to be forgotten according to Wallace.

"He hasn’t a lot of rugby under his belt this season so he may be playing from the back a little bit there. He is still putting in the performances and still has a lot to offer in that sense - I think what he does in terms of his team-mates around him can’t be underestimated because he is a very talismanic figure and a guy that you want to play alongside," outlined Wallace.

And, Wallace remains hopeful another Munster player could force his way back into the Irish set-up.

"One player not in the squad and I am going to put my Munster hat on is Jack O’Donoghue. I think he is really firing and is a victim of the strength and depth that we have at that level. He could easily come into that level and perform at a very high level. I’ve been impressed with him again this year and he seems to be really on song in terms of performances," said Wallace.

"I think we are in good fettle - we don’t have massive injuries. We are on solid footing and a good mixture of youth and mature experienced players and I think pretty much all of them are in good form one way or another. You would wonder, are we a little undercooked? Some players might not have got a lot of game time and that may be a factor especially when you look at the three teams that we are up against," explained Wallace.

"Normally you get one, not weaker team but a little bit of a reprieve where you can run out a few of the younger players but that doesn’t seem to be there in this fixture list. When you look at the next seven or eight months it is a really really tough fixture list at international level. They are going to be concerned as a coaching staff about result and getting off to a good start  is going to be massive so the game against Japan is going to be very big."

Canterbury, the official kit partner to Irish Rugby, today revealed the new Ireland Rugby Heritage jersey, inspired by 2003's classic strip. The Heritage jersey is available now via Intersport Elverys in store and via Elverys.ie, and on Canterbury.com. Pictured above at the launch of the new heritage jersey is former Ireland and British and Irish Lions player David Wallace.