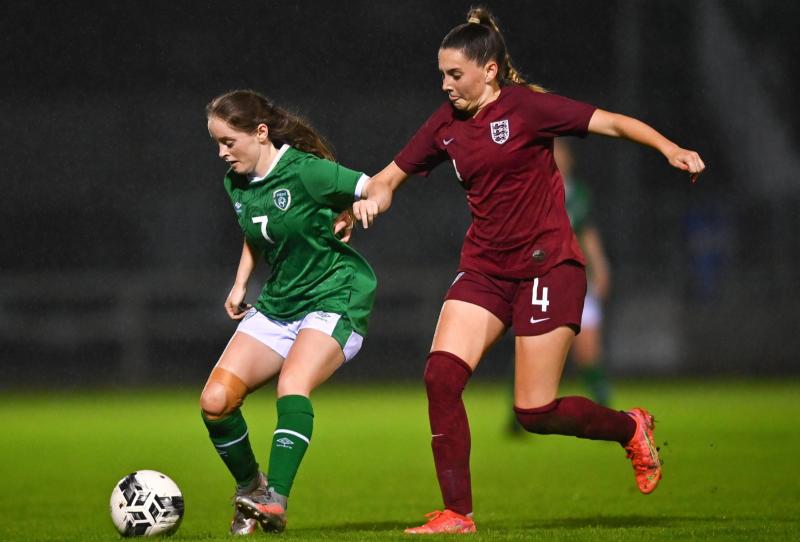 Ex-Treaty Utd player Aoife Horgan, of Republic of Ireland, in action against Teyah Goldie of England during the UEFA Women's U19 Championship qualifier at the Markets Field on Wednesday night

In front of 1,512 spectators at Markets Field, Dave Connell's team produced an impressive performance but an own goal from Shauna Brennan saw them come up short.

Ireland wasted no time in getting started with a dominant defence against England’s speedy forwards in last night's game at the Markets Field.

They were forced to react to the quick pace of England’s Tara Bourne and Freya Gregory who worked in tandem to push the ball up the pitch continuously. Nonetheless, Ireland’s Ellen Molloy displayed a masterclass on controlling the ball throughout midfield.

Goalkeeper Rugile Auskalnyte showed her strength, saving some early shots from the brave England side including an 8th minute attempt from Freya Gregory. The DLR Waves keeper continued to control the pitch throughout the game, directing alongside captain Della Doherty in the back line. A superb defensive play from full Irish back-line blasted England’s 16th-minute attempt on goal.

The safe hands of England goalkeeper Khiara Keating proved troublesome for the Irish side. Aoife Horgan, based in Central Connecticut State University, set up a fanatastic shot only to be put shy of the goal by Molloy. A 33rd-minute attempt from her rilled the crowd but flew centimeters above the crossbar. The 42nd minute showed Becky Watkins with a superb run at the goal only to be stopped by Keating once again.

The second half got underway with a strong save from Auskalnyte. Then Watkins continued with several more quick attempts on goal. Kinnevey played a vital part of Ireland’s rock solid defense, deflecting several chances for the Lionesses. With just over 10 minutes to go it would be a corner from Gregory that would result in an own goal for Ireland in an attempt to deflect the shot. The game concluded with four minutes of additional time played and a disappointing result for the Girls in Green.

Looking forward, Ireland will look to build on this performance but add that finishing touch. Next up is a Saturday night qualifier against Switzerland at Markets Field, 7pmRep of ireland . Tickets can be bought at the turnstiles.