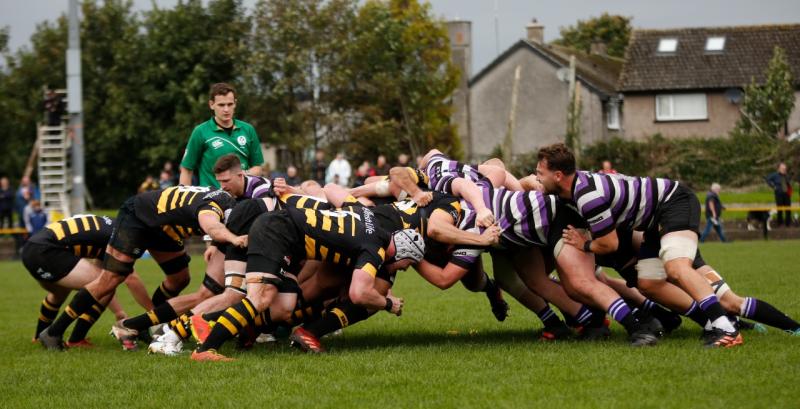 THERE were three Limerick wins, while Bruff recorded a draw in Division 2C, following the third round of Energia All-Ireland League fixtures.

In the top flight, Garryowen and Young Munster continued their winning ways after recording precious home successes on Saturday. UL-Bohemian claimed their first win of the campaign in Division 2A on Friday night, while Bruff claimed two precious league points in a home draw in Division 2C.

Division 1A table toppers Garryowen extended their excellent start to the season when recording a 26-13 bonus point victory over UCD at Dooradoyle.

Garryowen, who were facing student opposition for the third successive weekend, trailed 7-10 at half-time.

The Light Blues' first half points came courtesy of a Bryan Fitzgerald try which was converted by Tony Butler.

The home side added three more tries in the second period, including a second of the game from Fitzgerald and two from Sean Rennison. Butler converted two of the tries.

UCD did lead the contest 13-12 at one stage in the second period, until Garryowen hit them with 14 unanswered points.

Young Munster kept pace with their neighbours when recording a 19-7 success over Terenure College to also make it three wins from three.

Munsters' led the hard fought contest 6-0 at half-time, thanks to two penalty goals from the boot of out-half Evan Cusack inside the opening 20 minutes.

Munsters' were down to 13 players for the start of the second half and were playing into the breeze.

However, a third penalty from the boot of Cusack pushed the home side two scores to the good at 9-0.

Terenure rallied and were within a score of their hosts, 7-12, with just over five minutes remaining.

Meanwhile, in Division 1B, Shannon suffered their second defeat of the campaign after going down 23-20 to City of Armagh in a dramatic finish at the Palace Grounds

Shannon, who had to make-do with taking a losing bonus point from the game, had trailed 6-10 at half-time.

Shannon drew level at 13-13 in the 48th minute after being awarded a penalty try when a powerful maul was dragged down illegally.

After Armagh had taken a 16-13 lead, Shannon hit back  in the 75th minute. Darren Gavin made a break before linking up with Alan Flannery who put Ireland U20 international Daniel Okeke over for a try.

O'Sullivan's successful conversion made it 20-16 to the Limerick side. However, ultimately Shannon fell to their second defeat as Armagh claimed the win with that last gasp penalty try.

In Division 2A on Saturday, Old Crescent had to make-do with taking a losing bonus point from their long trip to Eaton Park which ended in a 29-25 defeat to Ballymena.

The Ulster side took control of the game after the restart, moving into a 22-6 lead. An unconverted try from Cathal Monaghan kept Crescent in touch at 22-11, before the home side struck for a precious try to move 18 points clear.

To their credit, Crescent battled back to secure that losing bonus point with two late tries, including one from Niall Hardiman, with McKenna adding two conversions.

In Division 2A on Friday night, UL-Bohemian recorded their first win of the campaign when edging past Cashel 18-14 at UL.

The Red, Red Robins, under head coach, the former Munster and Ireland flanker Tommy O'Donnell, were awarded a first half penalty try, while Joe Murray also dotted down for the winners in the opening period.

Cashel rallied in the third quarter to cut the deficit to a single point, 15-14. However, a 60th minute penalty edged UL-Bohs four points to the good, 18-14, an advantage they would not relinquish.

In Division 2C, Bruff collected two precious points from their 14-14 draw with Clonmel at Kilballyowen Park.

The sides had also been tied 7-7 at half-time.