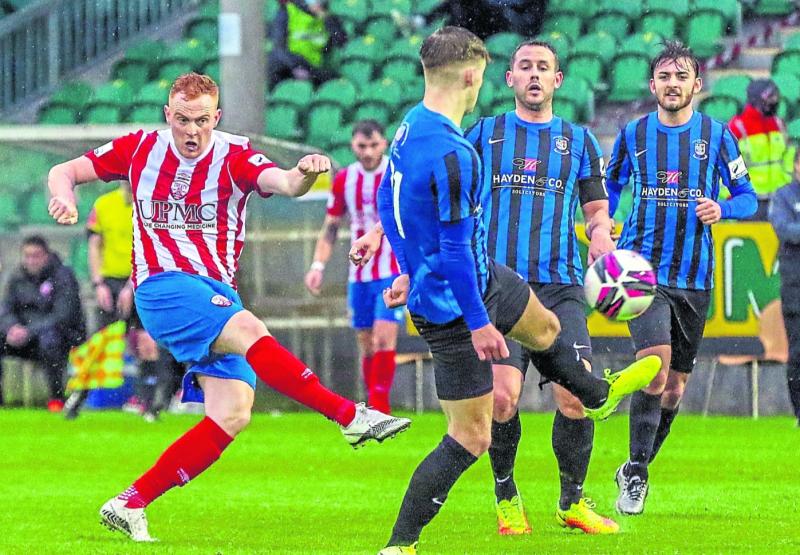 Treaty Utd striker Kieran Hanlon has a shot on goal in the First Division clash with Athlone Town at the Markets Field in May Pic: Kieran Ryan-Benson

The result leaves fourth-placed Treaty United six points clear of sixth-placed Athlone in the battle to secure a promotion-play off spot. The Midlanders have just two games remaining in their regular season while Treaty United have three games to go.

The sides finishing down to fifth place in the First Division table will secure a promotion play-off position.

Treaty's scheduled fixture against UCD last night was postponed as the Dublin side have players involved with the Rep of Ireland U21 side which is involved in international action at present.

The remaining fixtures begin with the meeting of Treaty United and Athlone at the Markets Field next Friday night, 7.45pm.

A point from Friday night's game will guarantee a promotion play-off spot for Tommy Barrett's side with two games to go.

Treaty also have a superior goal difference to Athlone so are strong favourites to secure a promotion play-off spot. Treaty Utd's goal difference is +8, while Athlone's is -10.

Treaty, who are in their first season in the League of Ireland sit just one point behind third-placed UCD in the First Division table and are one point clear of fifth-placed Bray Wanderers. All three sides have three games to play in their regular seasons.

The winner of this match will then face the ninth-position Premier Division team in the promotion/relegation play-off final in the week ending Sunday, November 28.