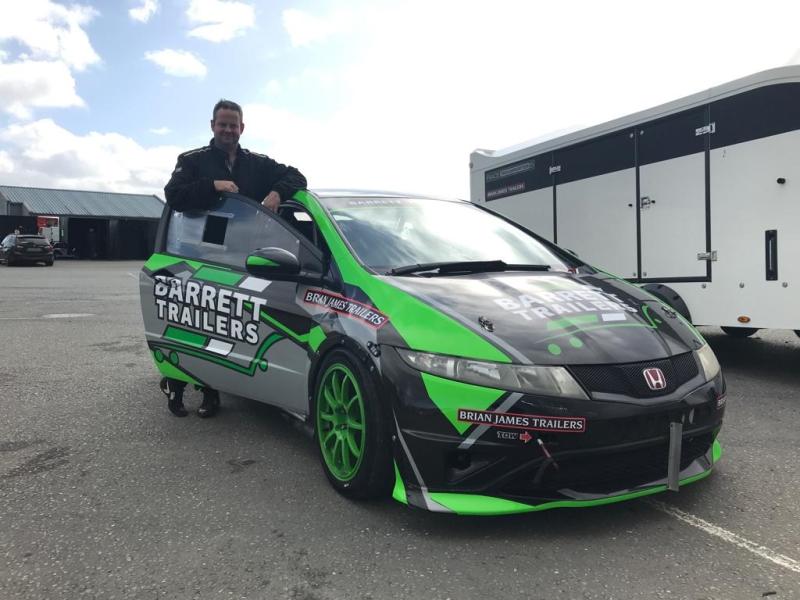 LIMERICK man Willie Barrett is one of the seven drivers representing Ireland at the FIA Hill Climb Masters in Portugal this weekend.

The Effin native competes in the 2.0L Honda Civic Type R class in Braga, with qualifying on Saturday.

This Wednesday, James and his eldest child John set off from south Limerick for a 27-hour boat journey from Rosslare to Bilbao in Spain and then a six hour drive to Braga in Portugal.

"There are over 180 drivers From over 20 countries competing. Each country selects four of there drivers to represent their country on the nations cup team. It is based on your results in your own country’s Hill Climb championship. There hasn’t been any championship in 2020 or 2021 in Ireland so it was based on 2019 results. I won the class i was in and was then selected by the Hill Climb commission for the Irish team," explained Barrett.

"To be able to compete with the very best of drivers and machinery. Looking at the entry list the quality and variety of cars is unbelievable, obviously saying you drove for your country isn't something you get to say everyday. Realistically in a Honda Civic I haven't a hope of an overall result or a class result. The nations cup adds competition to the event and its great to be apart of an Irish team," outlined Barrett, who runs a garage in Kilfinane.

"In Ireland my car would be very competitive. However the cars at this event are in a totally different league. Your competing against the best drivers in Europe in Ferraris and Porsches and so on. My main aim is to qualify for the race on Sunday," said Barrett, who will no doubt be keeping an eye on the scoreline as his GAA club Effin play in the Limerick IHC also on Saturday.

Barrett is involved in motorsport since he was a teenager.

"I don't come from a motorsport family. Formula One was on RTE when I was a child and I was a big Jordan Formula One fan. My first car was a 'boxy starlet' hot rod car that I raced in Rosegreen in Tipperary when I was 17," he recalled.

"I won races in the Fiesta Zetec Championship in Mondello and won the rookie championship, I've won class 2 a couple of times Hill Climbing and finished 3rd overall in the Limerick Sprint in a 1.6L fairly secondhand looking EK Honda Civic," he outlined.

"My first Hill Climb was in Effin in 2014 in a Fiesta. I was competing in Mondello with at the time but the difference in competitors is night and day. Every hillclimber in my experience is more than willing to lend a hand, offer advice and even leave you drive their car if you have problems with your own - the fun element attached to hill climbing doesn't seem to be in any other form of Motorsport," he explained.

"It is one of the oldest forms of motorsport. Drivers compete against the clock from point A to point B uphill. The course can vary from 3 km to 15 km on closed public roads - the route in Portugal is 5k. When u break the beam in my opinion it is the ultimate test of speed and driving ability. With every increasing cost of competing in motorsport I would hope to see bigger numbers at future events. I think hill Climbing offers great value for money, competition, open classes to suit just about any type of car and fun which can be lacking in a lot of sports these days," said Barrett.

The Effin man is married to Sandra and they have three children; John (15), Anastazija (5) and Valentina (18 months).

"I would like to thank Brian James trailers for the fantastic support they have given me to get too and compete at the event. Also a big thank you to Joe Clifford from Thomastown. We have been racing together since 2016 and it was in his car I won the championship in 2019 to qualify for this event."