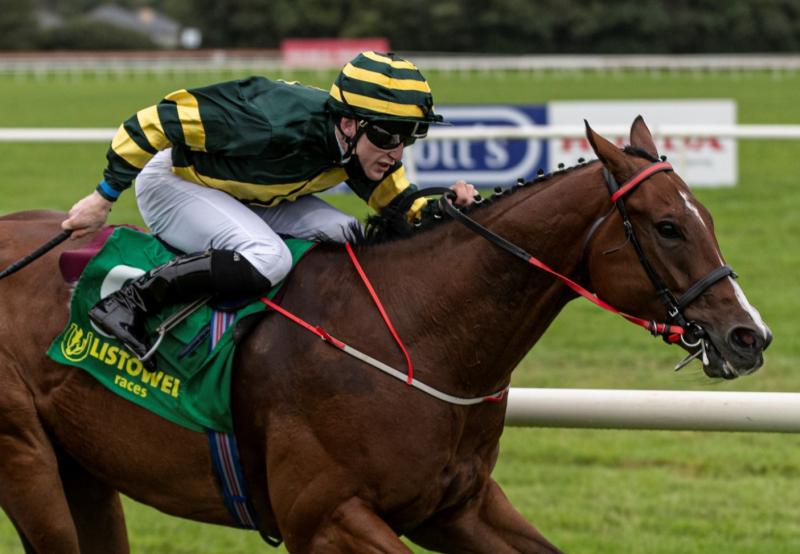 EOIN McCarthy made a splash at Listowel 12 months ago and he was at it again at the 163rd Harvest Festival, enjoying a facile victory in the second division of the Rose Hotel Handicap with Drombeg Duke, who has been rejuvenated since joining the Athea yard having previously done well for Austin Leahy.

Gavin Ryan delivered the 10/3 favourite with a powerful run turning for home and he cruised to a six-and-a-half-length victory.

Bruree-based handler Enda Bolger could have a smart hurdler on his hands as Choir Practice scored in the first split of the McSweeney Brothers Maiden Hurdle. Mark Walsh had the daughter of Fame And Glory in the slipstream of the pacesetters throughout and she was travelling like the winner from two out, finding plenty when asked to put the race to bed.

After his sister Gillian’s triumph on Tuesday, it was nice for Ballingarry jockey Billy Lee to get on the board at Listowel three days later, and he was seen to good effect as the heavily-backed French Claim fell out of the stalls in the Irish Stallion Farms EBF Median Auction Maiden. With a lightning pace up front however, Lee was able to chart a wide path turning in and the Paddy Twomey-trained juvenile showed fantastic resolve to battle to a half-length triumph.

Rathkeale trainer Eric McNamara always targets a victory at Listowel and Ryan Treacy landed Northern Love in front in the final stride to deny Bolbec by a short head in the Paud Fitzmaurice Memorial Handicap Chase, having missed a couple of fences that shuffled him back in the pact at the wrong time. The six-year-old giant will clearly progress though and was justifying 3/1 joint favouritism.

Later that evening, Shanagolden jockey Chris Hayes steered the Lee Smyth-saddled Adams Harbour to take the Donate To The Coast To Curragh Handicap over five furlongs at Dundalk on Friday, crucially getting his partner out quickly from the stalls to dictate throughout and register his third all-weather success.

Back at Listowel on Saturday, there was plenty of local success, with the standout being the comfortable victory of the Tom Cooper-trained Definiteadare in the second division of the Kathleen Walsh Memorial Handicap Hurdle, Bryan Cooper doing the steering. Eoin McCarthy also got on the board with Cosmic Rock in the first split, Garett Noonan getting a stirring finish from the stable favourite.

Run For Oscar hit the target for Ballingarry trainer Charles Byrnes, benefiting from a good ride by Jack Foley in the MJ Carroll ARRO Handicap Hurdle.