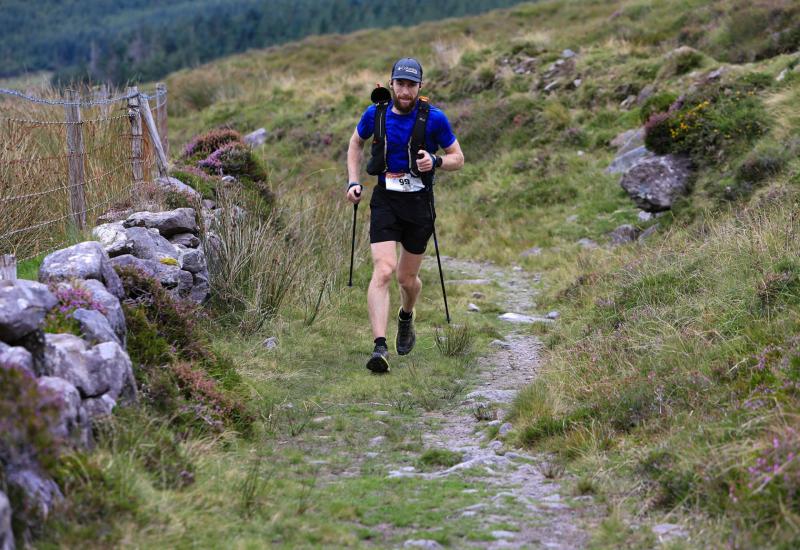 "TO be able to do something that you didn’t know was possible is great," surmised Limerick ultra runner John McKeogh.

Last month the Kildimo man won the Kerry Way Ultra race - approximately 200km of roads, lanes, trails, paths and hills, running parallel to The Ring of Kerry road on the Iveragh Peninsula. Starting and ending in Killarney, the race is a single stage, self-sufficient ultramarathon, with limited access for race support crews.

A Software Engineer in Johnson & Johnson, McKeogh only returned to running in 2019.

"I would have run haphazardly over the years but not much really. I did one five-mile back about 2006-07 but probably did run again for four or five years. In 2019, one of the guys in work was doing a small bit of running – maybe 5kms, three or four times a week and I started back doing a little bit. I picked a marathon far in the distance. That was about April and I was doing 5kms and I picked he Frankfurt Marathon at the end of October and worked towards that. Before the marathon I had a goal of about three hours but I had no idea really what I would be able to run – I managed to run 2.44. In my first marathon I was delighted with that," he recalled of the October 2019 event.

"I didn’t even know if I wanted to run again after that but trained away that Winter and picked another marathon for the following run – I was hoping to run Rotterdam. I was thinking if I can run 2.44 in my first marathon maybe I can go a bit faster if I train better and more specific. I was training away for Rotterdam in April and then Covid-19 hit and all that got thrown out."

With a limited calendar of events, McKeogh got creative.

"I was looking for some race that would be on and that could be a goal for me in the future and I could the Kerry Way Lite and entered that. I didn’t change my training too much but on the weekends instead of a long run the roads I would go off to Ballyhoura or the Glen of Aherlow for the day and maybe do a 20-mile run. I managed to win that and set a course record. I was thinking I’m not too bad at this," he said of the 2020 event.

"I had signed up for another marathon but that got cancelled too. Early in the New Year I was thinking sure I have done the Kerry Way Lite, I might as well give the big one a go. Even though I had done well and won it (Kerry Way Lite) my legs were pretty beat up after it. I didn’t think I needed to change too much training but needed more climbing so instead of running a mountain once a weekend I went twice. More time on hills basically," he explained.

"The only race I did in between, because of Covid-19, was the Ultra Trail in Ballyhoura which is a 60km event. I won that so I was thinking well I am at least as fit as last year. I spent a lot of time in Kerry. My wife Rachel spent the Summer travelling up and down the road to Kerry with me and we travelled every bit of the Iveragh Peninsula. Even after one section of the course I was pretty broken up after it, every time so I didn’t have a huge amount of confidence."

Back in August, McKeogh got the perfect pre-race boost.

"My brother got married in Killanrey in August and two days after the wedding I went for a bit of a run from Killarney to Glenbeigh which is the first two legs of the Ultra. I did about 56km and felt good when I got to Glenbeigh – I felt I could run another leg, whereas every other time I was gone. That was about three weeks out but I still didn’t know what to expect – the most time I had spent running was bout seven hours!"

Raceday was September 3 – a 6am start in Killarney.

"On the day I had no idea what was in front of me," he smiled.

McKeogh started well and was in the leading group when he fell and hurt his hip.

There were eight support crew stops across the 200Km route and McKeogh made it to the first one.

"In Glencar didn’t know I I could continue," he recalled.

But he kept going and started to feel better and make up lost time on the leaders.

When he reached the Folimore crew stop they had welcome news that he had made further inroads on those ahead of him.

"That lifted my spirits and I forgot about the hip!"

Outside Waterville – about the half way mark, the Kildimo man was the new race leader.

"I was getting blisters on my feet and they were beginning to hurt. By the time I got to Waterville I had been leading for maybe 10km. I sat down in Waterville and that was my first time sitting down. I sat for four minutes but it felt like ages – they took off my shoes and socks and powdered my feet and put back on new shoes and fresh socks and I had two glasses of coke."

It was now over 12-hours into the race.

By Sneem it was time to turn his head torch and then sometime around midnight and somewhere between Templenoe and Kenmare, McKeogh was lost.

"I had planned earlier on in the year to go down in the dark and go through it in the dark but I never did. All you are doing is looking for these yellow posts – there was one post that I could not find! The gorse was so thick I coudn’t see where I was going even though I had GPS on my watch.2

There was a reassuring phonecall from his wife and like all good men, he listened and returned to the previous post to try again.

"I lost half an hour going around in circles on that mountain section – eventually I found the way out just going through some thick gorse and got into Kenmare."

Muckross Park was the home stretch.

"I was still doing four and a half minute per kilometre through Muckross Park from Torc,” he explained of the closing stages of his near 24-hour run.

After a 6am start on Friday morning, McKeogh crossed the finish line just before 4.30am on Saturday morning.

2To be able to do something that you didn’t know was possible is great – I had no reference point if I was strong enough to do this,” he said.

So about 12-minutes of standing still at the varying crew stops across almost 24-hours.

"Maybe 40 gels, 20 bottles of Tailwind, six or seven bottles of Electrolyte and maybe a litre of Coke. Some guys eat bananas or pasta but I am not able to eat and go for a run at the best of times so definitely not able to eat in the middle of a race.”

He was quick praise his "Formula One crew".

"Ultra running is really a team sport. Without them I couldn’t have done this. They were on the go all day long for 22 and a half hours. Each time I came in to an Aid Station they have everything ready – they said I was stopped for about 12-minutes in total all day which is down to them having everything ready," he said.

The five person support crew included his wife Rachel Noonan, her sister Lisa, John’s brother Robert and his girlfriend Hayley-Louise Orr and Martin Maher, the work colleague who got McKeogh back into running in early 2019.