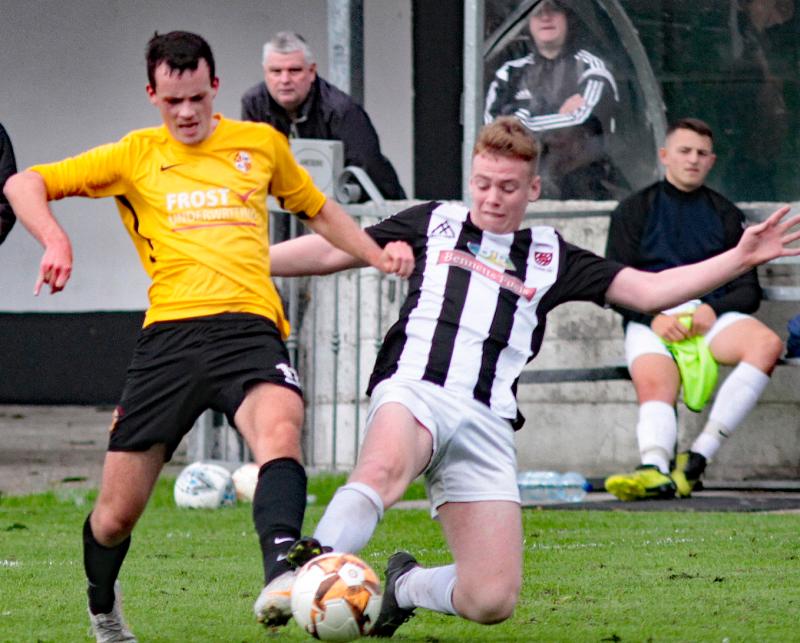 Munster Junior Cup holders Aisling Annacotty continued their quest to retain the title when they defeated fellow Premier side, Janesboro 4-1 at Pearse Stadium.

With the aid of a stiff first half breeze, Aisling dominated proceedings and took a two goal in at the break.

With the wind at ‘Boro’s back in the second half, they produced quite a number of openings but could only procure one goal before the visitors tacked on a couple of late strikes to put a gloss on the scoreline.

Shane Clarke slipped Shane Tracey in to lift the ball over Darren Glasheen from close range to open the scoring.

The lead was doubled when Liam Quinn headed powerfully in from Tracey’s corner kick delivery.

The home side were much better in the second half and got a deserved consolation when Aaron Quinlivan showed determination aplenty before blasting in.

Former ‘Boro favourite, Shane Clarke,put paid to any comeback when he converted a spot kick, awarded for a foul on Liam Quinn.

In the dying moments a cheeky Clarke back heel completed the scoring.

Aisling’s reward is a tilt with the club's Bee string in round three.

Premier A side Carew Park claimed a top flight scalp when they held Nenagh scoreless before emerging victorious after a penalty shootout.

In an evenly fought encounter both sets of defences proved dominant throughout but for the the winners, Francis Kett and Adam Frahill were prominent.

Regional Utd faced a potential banana skin with a trip to a sticky Croom side and were in no doubt when Conor Laffan fired the county side in front.

The Premier side responded well and ran out easy winners in the end.

After their giant killing exploits against Coonagh last weekend, Shels were brought back to earth by a focused Balla XI on Sunday.

There were two goals each from Adrian Power and Aaron Nunan, with Aaron Nunan 0

Pike Rvs eased into a third round tie with Glenview Rvs following a 6-0 win over Newport on Sunday.

Shane Walsh and Colm Walsh O'Loughlin claimed a double each and their tally was made up by Steve McGann and Conor Layng.

Prospect ensured another Premier side in the round four after recording an easy win over Holycross.

Prospect will now play Pike Rvs B and the winner’s going on to replace Limerick in the out of town stages of the tournament.

After a dull opening, the game sprung to life in the 37th minute when Will O’Neill put ‘Dines in front.

Moments later it was all square when Adam Costello headed in the equaliser.

Mid way through the second half, Bradley McNamara put ‘Boro in the driving seat but within 45 seconds it was all square when Ousman Darboe got in to level the game.

On 80 minutes O’Neill scored his second with an absolute beauty but in the final moments Adam Costello scored again to force extra time.

Penalties ensued and it was Janesboro who kept their nerve to advance to round two.

Premier A League leaders welcomed Charleville and in a cracking tie, the points were shared after a 2-2 draw. Shane Dillon scored twice for the visitors while David Hannon and Ben O'Shaughnessy, with a stunning last minute equaliser, accounted for the home side’s goals.

Habideen Gbadebo scored a hat trick for Moyross and Stephen Hannon was also on target as Frank Hogan’s men edged out Aisling B in Moyross. Caimin Ayres, Paul Brennan and Billy McNamara netted for the visitors.

Thankfully, Conor Lynch continues to display appetite for the fray and on Sunday the prolific striker chipped in with three goals in Granville's six goal win over Patrickswell to keep them top of the table in Division 1A. Nathan Walsh, Shane Waters and Lee Hartigan completed the scoring.

John Fitzgerald scored both goals for Kilfrush in a 2-1 win over Ballylanders for whom Cathal Shanahan replied.

Wembley Rvs moved top in Division 2A with a 2-1 win over Corbally Utd B. Diarmuid O'Callaghan and Tom Kennedy scored the winning goals.

Caherconlish edged out Castle Utd by the odd goal in five thanks to scores from William Hourigan, Hugh McGuire and Dave Corbett.

Cian O’Grady and Timmy Lee Casey scored for Dromore in a 2-2 draw with Coonagh. Cian Murphy and Rory Barry replied.

In Division 3A, Pike Rvs moved top following a 4-3 win over Summerville Rvs B. Kevin Barry scored three for the winners with Adam Quinlivan also obliging.