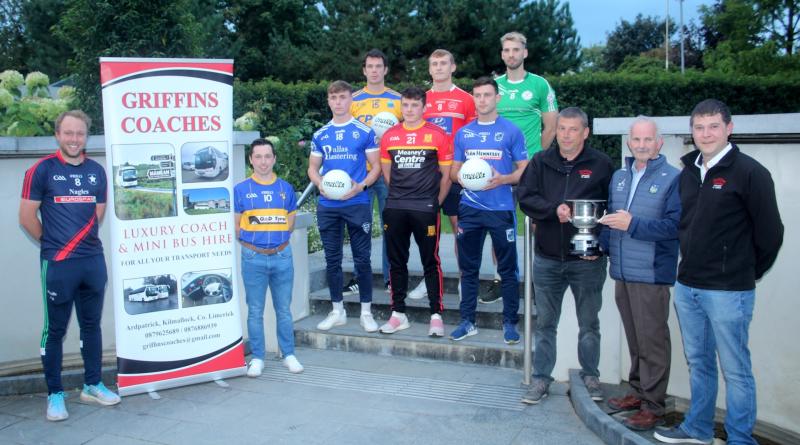 Pictured at the launch of the Griffins Coaches Limerick IFC

THE semi finalists will be known in the Griffins Coaches Limerick intermediate club football championship this weekend.

Already, Rathkeale have booked their spot in the last four with a 0-11 to 1-5 win over Dromcollogher-Broadford on Thursday evening.

This Saturday afternoon there is one quarter final - Kildimo-Pallaskenry v Mungret in Clarina at 5pm.

Mungret were boosted on Wednesday night when they won the County U19 Premier football title with a final win over St Patricks. Some of that panel will see action in this intermediate tie.

Mungret, who are coached by Dave Lavin, are looking to reach a third successive semi final. They will look to Killian Ryan, Jack Coyne, John Hutton and Shane Barry among others.

Kildmo-Pallaskenry lost at the quarter final stage last year to St Senans. They have inter-county men Peter Nash and Tony McCarthy in their ranks.

There are two ties on Sunday.

St Senans are coached by former Limerick senior football manager and former Laois coach Maurice Horan. In their second season down from the senior ranks, they lost at the semi final stage last season.

Pallasgreen will be looking to reach the semi final for the first time since 2018 when they lost to Galbally. Pallas will be able to call upon inter-county goalkeeper Aaron O'Sullivan and full back Brian Fanning.

Also on Sunday is Bruff v Gerald Griffins in Newcastle West at 4pm.