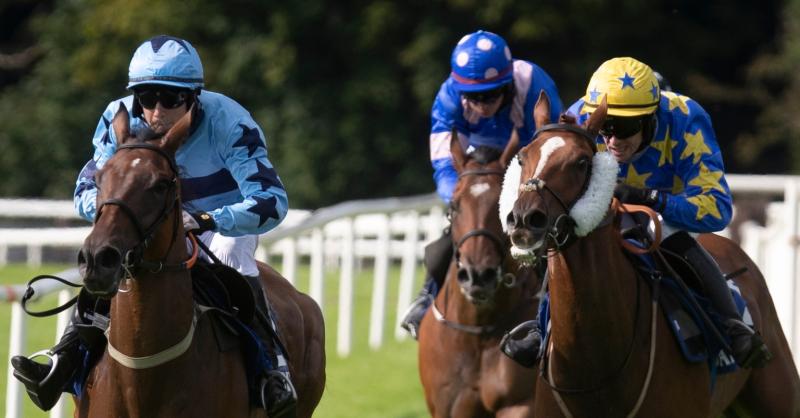 THE Byrnes brothers, Cathal and Philip, combined for two winners at Ballinrobe on Monday evening last.

The pair struck in the opening maiden hurdle with Kendancer, the strong 11/8 favourite was never far off the lead and went clear early on the run-in to beat the Sam Curling-trained Coastguard Station by three and three-parts of a length.

Two and a quarter lengths was the winning margin as 9/1 shot Metersandmasks completed a first double for both the trainer and jockey in the mares’ maiden hurdle.

Owned by Pauline Twiss and John Twiss, the five-year-old came from off the pace to score in good style at the main expense of the Roger McGrath-trained 9/4 chance Sweet Street.

The smart Ballyoisin made a winning return to action in the Corrib Oil Chase under Mark Walsh. Absent since finishing runner-up to Cilaos Emery at Cork in December 2019, Enda Bolger has the Fortria Chase in mind for the 10-year-old which made all to running to win by four and a half lengths from Exit Poll to complete a double on the day for the County Kildare jockey.

Shanagolden horseman Hayes initiated a double on the evening on the Gary Devlin-owned Capitulation which landed the opening eight-furlong maiden, the 9/1 chance just lasting home for local trainer Ado McGuinness.

She scored by a nose from the Dermot Weld-trained Butterfly Island, the pair nicely clear of Johnny Murtagh’s 4/5 favourite Chicago Soldier. Hayes and Curragh trainer Jim Gorman took the opening division of the eight-furlong handicap with the Andrews Syndicate-owned Plugged In.

The 11/1 chance came from off the pace to win by half a length from Tom McCourt’s The Bog Yank.

Ballingarry jockey Billy Lee took the median auction maiden on the Willie McCreery-trained Fictitious Lady. Again it was tight as the 13/8 favourite led on the line to deny her own stable companion Prince Hector by a head.

Rathkeale jockey Conor McNamara landed a double at Bellewstown on Wednesday, riding his winners for Gavin Cromwell who won the first three races on the card. Coulonces landed the claiming hurdle for the pair and owner Darren Cahill.

The 3/1 favourite recorded a three-parts of a length victory over the Paul Nolan-trained Emir De Rots and was subsequently the subject of 12 claims, with Paul Gilligan taking charge of the six-year-old.

Darragh O'Keeffe partnered Malina Girl to win the auction maiden hurdle at odds of 8/15 favourite before McNamara completed his brace and Cromwell’s treble on Broken Ice, a 4/1 chance, in the two and a half-mile handicap hurdle.

Billy Lee and Paddy Twomey were the big winners at Tipperary on Thursday where Pearls Galore scored an impressive success in the Group 3 Coolmore Stud No Nay Never Fairy Bridge Stakes.

The strong 5/2 chance was always up with the pace and readily got the better of the Ger Lyons-trained Roca Roma by a length and three-parts.

Twomey commented, “I’m delighted she did that. She was in great form when she won the Brownstown and I said we’d go straight for the Matron at Leopardstown on Longines Irish Champions Weekend now.”

Abbeyfeale apprentice Paddy Harnett and Cashel trainer Donnacha O'Brien won the opening claiming maiden with the Atlantic Thoroughbreds-owned Don Julio at Tipperary on Thursday. The easy-to-back 3/1 chance led inside the final furlong to win by a length and three-parts from the Willie McCreery-trained Hul Ah Bah Loo which was ridden by Billy Lee.

There were three claims made for the winner which now joins trainer Shane Duffy after owner John Keogh’s bid proved successful.

The outstanding Colin Keane created his own piece of Irish racing history on Saturday and fittingly it all took place at his local track. He recorded the fastest century of winners by a Flat jockey in Ireland when taking the eight-furlong maiden on the Ger Lyons-trained Barretta and for good measure rounded off the day with a winner for trainer Tom McCourt.

The 26-year-old has Joseph O'Brien’s record 126 winners in a season as his target after he reached three figures by steering 5/2 shot Barretta to a comfortable victory in the Donate To The Coast To Curragh Cycle In Memory Of Pat Smullen Maiden, a winner described by Shane Lyons as “our nap of the day”.

It is the fourth time Keane has ridden 100 or more winners in a Flat season and Lyons said, “We’re delighted that we were the ones to give Colin his ton up. This horse was our nap of the day going racing as his work has improved in the last month. He’ll get a mile-and-a-quarter no problem.”

Keane added, “It’s a brilliant feeling and the year has been going great. To hit a hundred in a full season is hard enough, so to do it so quick is unbelievable really. It makes it that little bit extra special that it's for Ger at it’s his 999th winner too!”

Keane brought up his double with a fine ride on the Tom McCourt-trained Dollar Value in the concluding handicap, the second of the day over 14 furlongs.

He made all the running on the well-supported 9/2 chance and looked to have a little in reserve as he beat the Pat O’Donnell-trained Extensio by a length and a quarter.