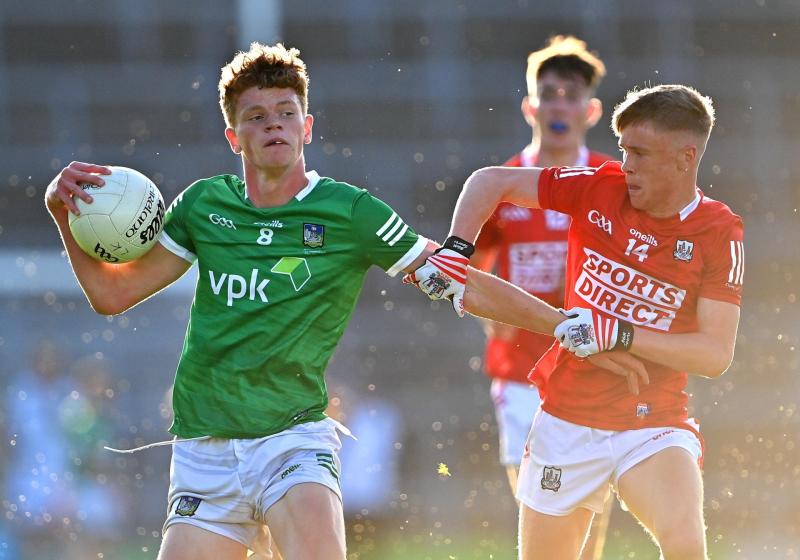 Jack Somers of Limerick is tackled by Jamie O'Driscoll of Cork during the Electric Ireland Munster MFC final in Thurles. PIC: Sportsfile

HEARTBREAK for Limerick in the Munster minor football final this Wednesday evening.

In Semple Stadium in Thurles it finished Limerick 0-13 Cork 1-17.

Limerick were a point ahead on 52-minutes but Cork romped over the winning line with the last eight points.

But what a brave display from Limerick who were looking to win just a second ever title at this grade and a first since 1956.

And for long periods, the Kevin Denihan managed Limerick were the better side in this final.

But they were overly reliant on the frees of captain Darragh Murray who ended with 0-8 (7frees).

The teenagers in red had the best possible start with a Hugh O'Connor goal on three and a half minutes.

So a 1-1 advantage for Cork before Limerick were off the mark. This was a Cork side that defeated Waterford by 40-points in the quarter final and then ended the reign of eight-in-a-row champions Kerry in the semi final but Limerick were undaunted.

Bit by bit the teenagers in green found their feet and after the bright start Cork weren't to score again for almost 15-minutes.

Ruairi Cronin had Limerick off the mark in the sixth minute and they progressed to play some bright football in all sectors of the field in the half, albeit their finishing let them down.

Limerick did have goalkeeper Craig MacInnes to thank in the 10th minute when he denied O'Connor a second goal while at the other end, Marc Nolan almost linked up with Cronin just before the water break to create a Limerick goal chance.

On the restart a Darragh Murray free reduced the gap to one point.

Back came Cork and they had three quick-fire points to move 1-4 to 0-3 ahead again.

Another Murray free stopped the Cork run but another two points were to follow for those in red.

Before half time Sean Geraghty had Limerick's fifth point of the evening.

So a four point interval lead for Cork and that was after a half in which Limerick had seven wides - four more than those from Leeside.

Limerick had gown into that first half and continued to do so on the resumption.

Cork edged five points clear before Limerick kicked eight of the next nine points to lead 0-13 to 1-8 at the water break.

Emmet Rigter set the ball rolling and his club-mate Geraghty had his second to leave it 0-8 to 1-7 after six minutes.

O'Connor hit back but then came five in a row for Darragh Murray - the first of them from play and the rest from placed balls.

The game was level in the 43rd minute and then two minutes later Limerick were ahead for the first time.

The sides were to be level on three occasions in the following minutes before four in a row from Cork swung momentum in their direction in the crucial final stages.

The sides evenly shared 18 wides with Limerick's final wide a palmed effort for a goal from Paddy Kennedy in the 60th minute when Cork were only four ahead.