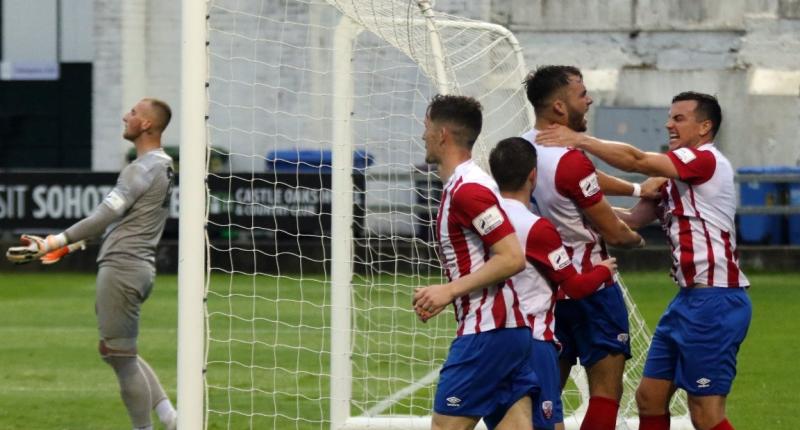 TREATY United's promotion play-offs hopes were dealt a blow on a filthy wet night at the Markets Field as struggling Cabinteely stunned their hosts 4-1 in the SSE Airtricity League First Division.

Treaty, who came into the home on a run of three wins and a draw in their previous four fixtures, were left stunned by their visitors who had come into the game on a run of six successive league defeats.

However, despite the home side sitting six places and 14 points ahead of their opponents in the league table prior to kick-off, they were second best on the night against a Cabinteely side who brought the greater energy and were clinical in front of goal.

It was a disappointing night for the league newcomers as up to 900 supporters were permitted to attend the fixture at the Markets Field with the welcome further easing of Covid-19 restrictions.

This was Treaty's second home league defeat of the season following Galway's success at the venue last month.

One positive note from the night from Treaty was the defeat of Galway, the side sitting just below them in the table just before kick-off, as they lost out 2-3 to Cork City.

Despite falling 2-0 in arrears after 37 minutes, Treaty gave themselves a lifeline just before half-time when Clyde O'Connell headed home from a corner to leave a single goal between the sides at the break.

Playing in front of their biggest home support since their arrival into the League of Ireland earlier this year, Treaty will have been confident that they could complete their comeback in the second half.

However, Treaty's hopes to getting something from the game were dented 10 minutes into the second half when match referee Patchell deemed goalscorer O'Connell to have committed a foul inside his own penalty area.

The referee showed O'Connell a red card and awarded a penalty which Niall Barnes converted for 3-1. The decision to award the penalty and send off the Treaty defender was a huge moment in the context of the game and one which the home players and supporters strongly disagreed with.

This was the second time this season that Treaty had lost to Cabo' in the league following their 2-1 reverse at Stradbrook in May.

There are now just nine games or one third of the regular season to go in the First Division. The sides finishing up to fifth place in the table will be involved in the promotion play-off series.

Despite suffering this set-back, Treaty remain firmly in the promotion play-off race and have taken 19 points from a possible 27.

In terms of team selection, for Treaty United Joe Collins & Willie Armshaw came into the starting line-up for for Edward McCarthy and Callum McNamara.

Alan Murphy returned to the bench from injury. Defender Anto O'Donnell missed the game through suspension, while Matt McKevitt, Dean George and Sean Guerins were absent due to injury.

After Kieran Hanlon flashed an early effort from a free-kick right and wide after Sean McSweeney was fouled, Treaty were left  stunned when falling behind after seven minutes.

Zak O’Neill whipped in a cross from the right wing which fell to Niall Barnes. Barnes shot at goal was partially blocked, before the ball fell to Vilius Labutis who fired home between Tadhg Ryan’s legs.

Labutis also grabbed the winner when Cabo' edged Treaty 2-1 at Stradbrook in May.

The home side was dealt another blow a few minutes later when striker Kieran Hanlon was forced off with an injury. He was replaced by Callum McNamara.

Despite suffering those early body blows, Treaty responded well and came agonisingly close to drawing level in the 23rd minute.

Sean McSweeney found Willie Armshaw with an excellent diagonal ball. Tipperary native Armshaw produced an excellent first touch to get inside the Cabo' full-back. However, Armshaw's effort on goal from a tight angle was parried up in the air by Cabo' 'keeper Halwax.

The ball spilled loose, but was eventually cleared to safety.

Treaty thought they had equalised in the 27th minutes as the rain grew heavier. From a free-kick on the left, Charlie Fleming played the ball down the side of the Cabo' defence where captain Jack Lynch centred the ball for the in-rushing Sean McSweeney to score.

However, the goal was ruled out for off-side in the lead up to it being scored.

The see-saw nature of the game continued soon after as Cabo' threatened to add to their 1-0 lead. However, a smart save from Treaty 'keeper Tadhg Ryan prevented Hudson from grabbing a second for the visitors.

Ryan was helpless in the 37th minute, however, as Kieran Marty Waters fired the visitors into a 2-0 lead.

Labutis nicked possession from a Treaty player before sending Waters racing clear and he coolly slotted low past Ryan.

The incident-packed nature of the game continued right up to half time when Treaty United hauled themselves back in the contest when Clyde O'Connell headed home powerfully from a Marc Ludden corner.

The sizeable home support roared their approval as Treaty gave themselves a lifeline just before the break.

Treaty boss Barrett brought on Edward McCarthy and Joel Coustrain at half-time in a bid to inject further improvement in the home side's display.

Treaty did begin the second half with a greater degree of urgency.

However, the home side was dealt a hammer blow in the 55th minute when first half goalscorer O'Connell was shown a red card for a tackle inside the penalty area. Referee Patchell pointed to the penalty spot and Niall Barnes smashed the ball past Ryan in the Treaty goal.

Trailing 1-3 and playing with 10 men, Treaty were left with a mountain to climb over the closing half an hour of the contest.

To rub salt into the Treaty wounds, Barnes then added a fourth goal for the visitors on 68 minutes as the rain continued to pour down in Garryowen.

Cabinteely also had the luxury of missing a penalty in stoppage time as Eoin McPhillips' effort blazed over the crossbar.