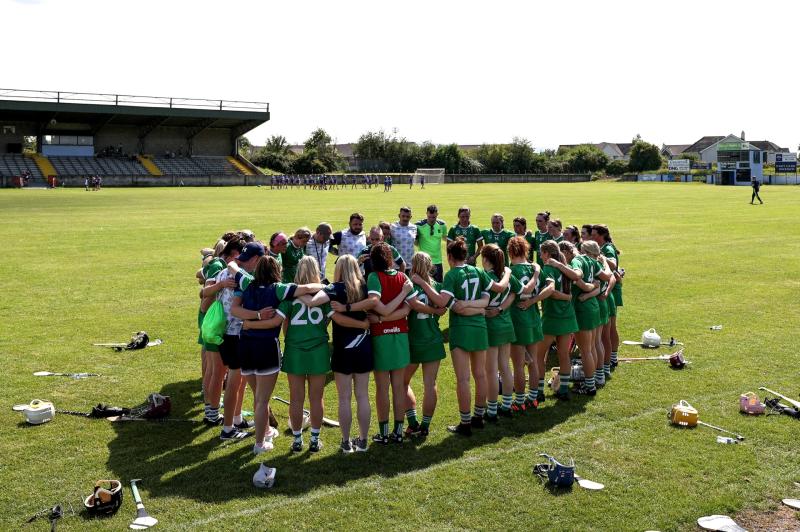 Manager Pat Ryan speaks with his players after defeat to Tipperary in Nenagh. PIC: Inpho

LIMERICK are now eight games without victory in the All-Ireland senior camogie championship.

And, just once across the last 16 years Limerick have advanced beyond the group stages of the championship.

Pat Ryan's Limerick still have to play Offaly next Saturday in Banagher with both sides seeking the win that would see them avoid a relegation play-off.

Manager Pat Ryan, who is in his first year at the helm, insists there is a lack of belief.

"There is a belief issue there - they are well capable of putting it up to anyone when they hurl and we saw that in the second half," he said of the second half which Tipp edged 2-7 to 1-8 but they had the foundation of a 0-13 to 0-3 half time lead.

"To get a win someday over a big team and then the belief would happen - I definitely believe that. When they hurl, they hurl and they are able to hurl," outlined the manager.

The end result of defeats across the last two weekends is that 2019 remains the only time Limerick reached the knockout stages since 2005.

"A lot of the girls in that dressing room have been through that and no matter how much you talk about belief and all that when they haven’t done it, it’s hard to instill it (belief)".

He continued: "There are some great players there when you see the likes of Judith Mulcahy and a few more - the service they are giving to Limerick camogie, they are the unsung heroes of sport in Limerick really and I am just privileged to be involved in a dressing room with people like that".

"Against Tipp or someone like that you cant give them a big lead but to be fair to the girls at half time they really rose and the hurlers last week gave them belief that they could come back. They gave it everything for 25-minutes of the second half and then they got a goal there near the end against the run of play. That is all we can ask for."

The Tipperary defeat on the back of the round one loss to Wexford means no progress for Limerick.

"The result like the Wexford one is coming back to haunt us now and we now have to try and go and beat Offaly now next week to close the season off and that is where we are at. Last week caught us with the Covid thing and then ended up losing in the last minute and that was the match we targeted because we always knew Tipp was going to be a big one," he outlined.

"No excuses, that’s sport and you have to lift your head and get on with it."

While most attention will switch to those in quarter finals and semi finals, Limerick must beat Offaly to ensure no relegation play-off.

And, he feels the future is still bright.

"Our juniors beat Cavan today and there is some great youth coming up and they are only 19 so probably need a year. The target here is if they could win a Junior All-Ireland this year and then come on as winners - not stunted by defeat. Hopefully they will go on and win the junior All-Ireland because that’s the target," said Ryan who is combining as Limerick senior and junior manager in 2021.