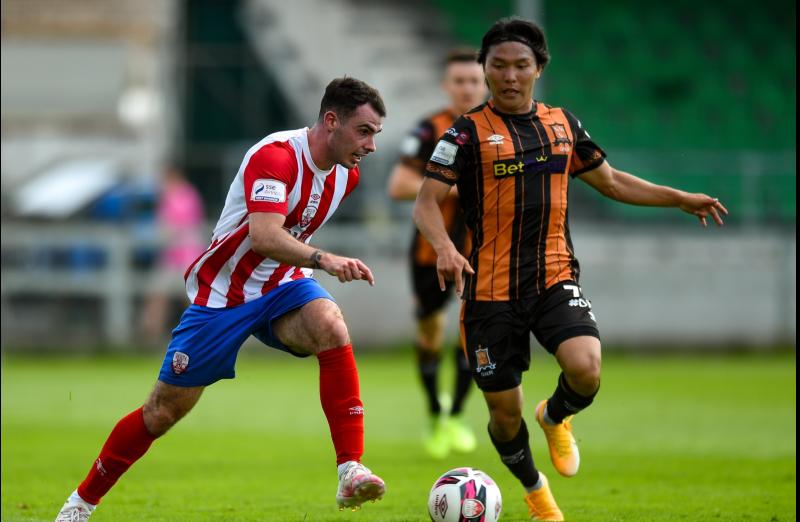 Patrick McEleney’s 104th minute goal was just enough for Dundalk to see off Treaty United in this afternoon's FAI Cup tie at the Markets Field. The heart-breaking moment for Tommy Barrett’s side came via a deflection to deny his side hopes of a massive upset.

FAI Cup holders Dundalk, who played in the UEFA Europa Conference League on Thursday, made four changes to their side. They were still able name a strong side captained by Irish international Andy Boyle.

The scorching July sun meant that it was another energy sapping afternoon at the Markets Field. Tommy Barrett again went with a similar shape and was able to recall Clyde O’Connell and give a first start to recent signing Stephen Christopher.

Joel Coustrain had the Treaty’s opening chance of the contest. Cutting in from his right flank birth and sending a curling left footed shot which had to be saved by Alessio Abibi.

Before that, Tadhg Ryan had to be alert to deny Han Jeongwoo’s stinging shot after 12 minutes.

Dundalk sprung Patrick McEleney and Will Patching from the bench on the hour mark, at it was the latter who was involved in plenty of good moments. He weaved out of a couple of tackles before forcing a save from Ryan. The Cappamore stopper also had to react and catch a David McMillian header seconds later.

Dundalk certainly increased the pace and quality in the final quarter, with Daniel Kelly the latest to try his luck with an effort, but Ryan pushed it over for another Dundalk corner.

McEleney tried his luck from outside the area again on 72, this time left-footed but his shot whizzed outside the post.

In reply came an effort from Willie Armshaw, trying to repeat his heroics from the Shelbourne game, but sent his effort from 20 yards over the crossbar.

Over 104 minutes were on the clock with McEleney eventually found a breakthrough as his deflected strike from inside the area trickled into the far corner.

Eight minutes later Anto O’Donnell was dismissed, much to disbelief of the home support. His forceful challenge on Han Jeongwoo was enough for a red card from referee Neil Doyle.

Try as they might, Treaty were able to find an equaliser, though they finished strongly, despite their numerical disadvantage.