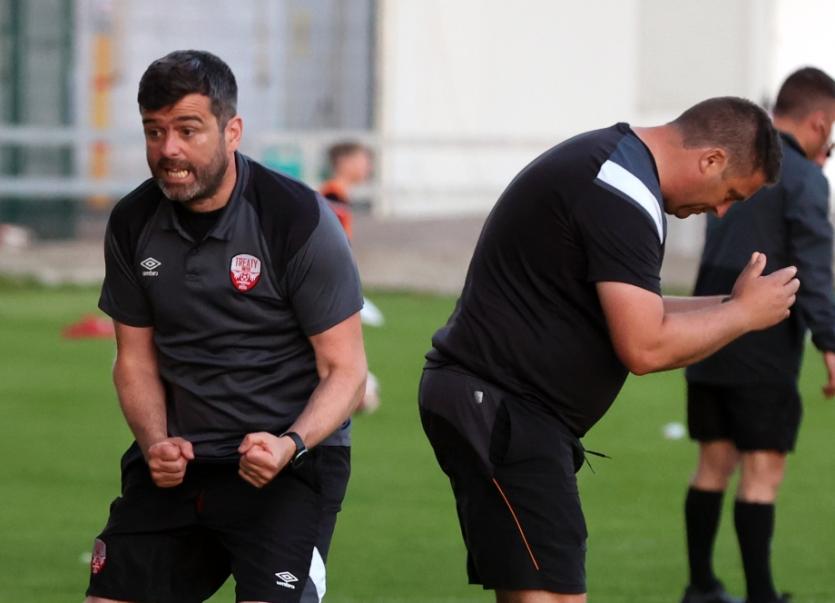 THERE was a brief moment just after Jack Lynch scored his second goal the other night to retake the lead against UCD where it dawned on me.

Senior soccer in Limerick has never quite had that level of resilience. But that’s too broad a term to describe the mixed emotions that the performances produce.

I was more looking to describe the fact that they’re now consistently delivering and the belief in witnessing same just doesn’t seem to register fully because of the past.

The reason the word escaped me is because it’s particularly expressive of a grander picture that feels like it merits its own colloquial place in Limerick vernacular given the disappointments that preceded it – and maybe prescribing to everyday terms undermines the suffering.

Limerick’s trajectory in the League of Ireland more resembles an elongated flatline with occasional moments of hope before a sudden drop-off than it does a series of peaks and valleys.

But every week now, you take a glance at the prices bookmakers offer about Treaty United getting positive results and you convince yourself their models know more than we do – even if it’s happening in front of our eyes.

There will come a point in time where the surprise fades and the reality of just not possessing the plethora of full-time professionals many around them do will catch up to them. That’s not exclusively Limerick though, and that’s easier to accept.

The last-minute equalisers against Shelbourne and the consecutive victories over Cork City give this club more substance than anyone really thought possible.

And anyone would be forgiven for thinking the fact that Tommy Barrett was always getting this job upon license award was more out of comfort than active ambition from his side.

Yet we’re now four months into the season and the club that are in bad need of overhauls in cosmetic areas seem to be wanting for nothing in the most important facets of a club – their results and performances.

Currently sharing second spot with Galway United – a full-time outfit managed by a man who won a double in not-too-distant memory and captained by a Limerick local who, pre-season, most would have swapped their first-born for – Treaty United are now more likely to have a chance at promotion than not.

Whether they’re ready for promotion or if it would even suit them is another column entirely, but right now, one thing is clear – it’s enjoyable watching a Limerick side play senior soccer.

If we’re picking holes, then we can start here. The red and white just doesn’t work and it does feel like the city relates to blue.

That’s a legacy thing and if they wanted to change it through consistency and embracing their identity, that’s upto them. Right now, the blue is a quicker fix especially as Limerick FC possess a stranglehold on that – and opting for it would really stand out of as an act of defiance and succession.

The name Treaty United is horrific. The focus of the name is actually on an agreement that would be later reneged upon by the British who initially guaranteed liberty to Catholics in Ireland – post-surrender in the Siege of Limerick in 1691.

I am still to this day unsure why a city with so much more interesting history choose to bear the tagline Treaty given the subject matter. But that, again, is subjective and unimportant when you’ve got Red Hanlon refusing to lose headers.

The last lingering issue is one of ethos – and the fact that club is not-for-profit means that it may actually lack the motivation to every truly push on for honours through financial injection.

While that’s a far safer path to take, that ideology will be a stumbling block eventually through diligence that has lacked in any previous entity we’ve seen before.

But that’s fairly much it. And while the success of Treaty United early doors means they might retain the moniker, it would surprise me if a shift to a title featuring the world Limerick wasn’t in the pipeline when the pathetic legal challenges that currently block them are thrown out.

On the pitch, Tommy Barrett is making functional footballers out of countless players who were either untested at the level or seemingly in limbo as to whether or not they even belonged playing in a professional league.

Anto O’Donnell has been the standout. He was a left back for most of his playing career and was consistently underwhelming at Cobh. I heard a comparison to Pat Purcell last week, such is the level at which he’s playing.

Matt Keane, Willie Armshaw, Mark Walsh and Sean Guerins were all relative unknowns pre-season in the League of Ireland and now any team sheet that doesn’t feature them feels incomplete.

Marc Ludden was the one safe investment and yet he’s still overachieving with his performances. Jack Lynch wasn’t kept on at Galway, largely because he didn’t make an impact. And yet here we are – captaining a side and contributing at both ends like it’s all he’d ever done.

The blue chips in Tadhg Ryan and Sean McSweeney have each paid dividends too. Given Brendan Clarke rarely sees a ball these days (he didn’t see Willie Armshaw’s strike either), it would be hard to imagine a goalkeeper ahead of him in the Team of the Year conversations. The latter is a bit more problematic but has so much quality that his introduction brings games to life.

I could go on.

But the key to all of this isn’t in lists or rationalisation – it’s in that sense of going into a game of football and feeling like the 80 years of footballing history that’s been almost exclusively abject failure doesn’t weigh these players down.

Then it hit me – the word I’m looking for isn’t relevant anymore. That task is taking too much stock of an old regime and we should now be embracing a new term: catharsis. Given the pain, everyone should be content about letting go.