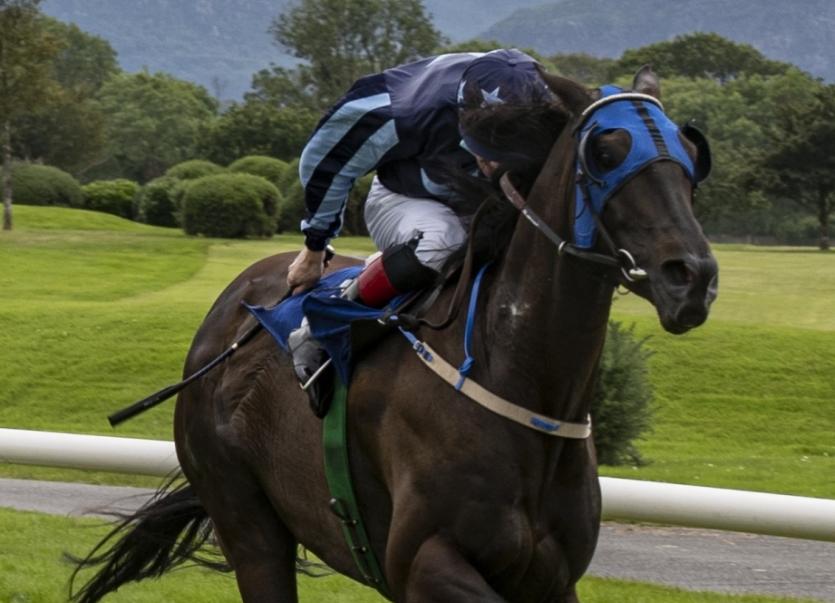 SHANAGOLDEN jockey Chris Hayes maintained his fine run of form with further success on the all-weather at Dundalk on Monday last.

The Limerick jockey teamed up with County Tyrone trainer Andy Oliver to win the opening five-furlong handicap on 3/1 joint-favourite The Highway Rat which raced to a comfortable three and a quarter-length victory over the Aidan O'Brien-trained Lipizzaner.

At Killarney later that evening, Rathkeale jockey Emmet McNamara was on the scoresheet as he partnered the Aidan O'Brien-trained Horoscope to a cosy win in the eight-furlong conditions’ race.

Rated all of 101, the three-year-old was adding to his Curragh maiden success when beating Dermot Weld’s Eylara by a length and a quarter at odds of 15/8 favourite. Billy Lee helped County Tipperary trainer Paddy Twomey maintain an enviable strike-rate as La Petite Coco won the 11-furlong conditions’ race.

The 4/9 favourite made all the running to win by two and a quarter-lengths from the Michael Halford-trained Kalapour. The Cashel trainer is operating at a 28% winner-runner ratio, the best of any Irish-based trained this season, and Lee has ridden nine of the trainer’s 10 winners.

Lighthouse Rose was an all-the-way winner for Cathal Landers at Downpatrick on Tuesday. Trained in County Sligo by Mark McNiff, the six-year-old was nicely clear under the Oola conditional after the penultimate flight and was eased close to the finish to beat the David Broad-trained King’s Song by eight and a half lengths. The winner was recording her second win at the course and was providing Landers with his eighth success of the season.

Emmet McNamara notched up his second winner of the week on the Kevin Coleman-trained Swiss Army Officer in the opening claiming race at Killarney on Wednesday. 5/1 chance which made all the running under the Epsom Derby hero to score by a length from the Sean Byrne-trained Eastern Racer.

The six-year-old stays with Coleman as there were no claims for any of the runners in the race.  The Chris Hayes-ridden Mehnah landed a notable success when taking the Listed Irish Stallion Farms EBF Cairn Rouge Stakes, the highlight at Killarney on Wednesday.

Hayes brought the Kevin Prendergast-trained 2/1 favourite from off the pace to lead inside the final furlong and she held the Dermot Weld-trained Emaniya by three-parts of a length. Hayes reported, “She had an awkward niggly injury in a muscle up high behind 10 days before the Guineas and it was baby steps ever since making to ensure that it didn’t come back. She was very under-cooked but fit enough for today's level - we have her 75-80% fit.

"I’d imagine Kevin will want to go up in trip with her and maybe the Group 3 over nine furlongs at Gowran could be a target. I think she is a Group 1 filly and I think she would be a good ride in the Matron Stakes or the Sun Chariot later in the season.”

Abbeyfeale apprentice Paddy Hartnett got the better of Colin Keane and a Willie Mullins-trained hot-pot to win the night’s finale. He teamed up with Ray Hackett’s 13/2 chance Sequoiaspirit which showed loads of determination to see off 6/5 favourite Double Talkin Jive by a short-head.

Cathal Byrnes was a winner again as the Blue Eyed Bridge Syndicate-owned One For Joe took the opening maiden hurdle at Killarney on Thursday. Phillip Enright was in the saddle as the 2/1 favourite easily brushed aside the 9/4 chance Rosa Gloriosa by seven lengths.

Billy Lee was a winner again when partnering the Ted Walsh-trained Ferrybank take the seven-furlong handicap at Leopardstown on Thursday evening. In the colours of the trainer’s wife Helen, the 13/2 chance readily picked off the front-running Jeroboam to win by a length and a quarter.

Mark Enright was first into the winners’ enclosure at the Curragh on Saturday after his mount John The Baptiste scored a last-gasp success in the two-year-old maiden. On his debut, the Fozzy Stack-trained 50/1 chance up on the line to deny the Aidan O'Brien-trained 3/1 joint-favourite Shark Bay by a nose.

Billy Lee ended the week on a high when partnering the Willie McCreery-trained Insinuendo to win the Group 2 Kilboy Estate Stakes at the Curragh on Sunday. The Curragh trainer has the Group 1 Matron Stakes at Leopardstown in September among the options for the ever-improving four-year-old which impressed once again when accounting for the Donnacha O'Brien-trained April Showers by a length and three-parts.