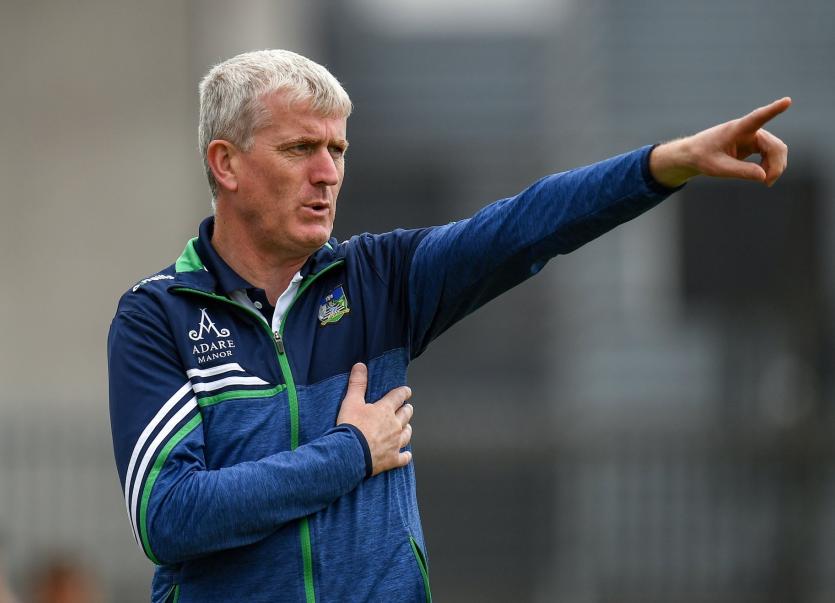 LIMERICK bid to win three successive Munster SHC titles for the first time since the 1930s this Sunday.

John Kiely's men have won two All-Ireland, two Munster and two Allianz League titles since 2018 but the Limerick manager insists that doesn't lessen the value of the provincial championship.

"They are all of huge importance to a player and they are seminal moments in any players career and days you will never forget," said the Limerick manager at a media event this Tuesday evening in LIT Gaelic Grounds ahead of Sunday's Munster SHC final against Tipperary.

While accepting his preparations won't focus on the occasion or title up for grabs, the manager is adamant that the Munster title remains coveted.

"We probably do deal with it as we do any other game in terms of preparation from a performance perspective. You have to acknowledge this is a Munster final and these are special occasions and ok we won't have 46,000 in Pairc Ui Chaoimh on Sunday but at the same time, does that diminish the game or the importance of the game? No it doesn't."

He continued: "Maybe from a performance perspective we raionalise the game in a way that affords us the best way to perform on the day but when that is all scraped out and we reflect on it in time to come there is no Munster final less important that another".

"We have always embraced the Munster Championship as being a real valued competition that we are thrilled to be still involved in and hope to produce a performance of merit for the occasion that is in it on Sunday," said Kiely.

Ahead of the final he confirmed an injury setback for defender Mike Casey who only returned to full training last Tuesday after recovering from a cruciate ligament operation last November.

"Mike Casey had a bit of a setback when he came in last Tuesday - he has an unrelated injury to the same knee unfortunately. The ACL is fully intact and perfect, it's just another injury to that knee but not very serious and we would be hopeful he can make a full recovery in a matter of weeks," said Kiely of the Na Piarsaigh man.

"Just very unlucky, just goes to show that you can do all that you can but ultimately the body is only so tough and will give away in certain circumstances. It's a setback and was very upsetting at the time and we were very much afraid it was an ACL again but thankfully it turned out to be something far less serious."

The Limerick manager was in situ in the Mackey Stand to watch Tipperary defeat Clare to book their place in the Munster final.

"Very impressed with the first half in particular and obviously the second half was impacted. The first half was a very high quality game by both sides and a great tempo and intensity."

What of the much debated sinbin incident?

"I saw it and i would concur with many opinions that it was very close to the sideline and there were other defenders between that and the goal and you would not have expected it to be a penalty and sinbin situation but I think all of our cards have been marked now," he outlined.

"We need to be careful and not invite it upon ourselves."'

While looking back on the Tipperary semi final win, the manager also recalled his route to the decider with victory over Cork.

"I think we showed great resilience because Cork put up a fantastic performance on the night and in many respects they put us under a lot of pressure and we definitely identified a number of areas that were not up to scratch on the night in terms of our own used of the ball and our own puckout and our own shooting in particular. We came home with a very grounded feeling of there is a lot of work to do here and we better get down to brass tacks," he stressed.

While John Kiely's five years as manager have had more highs than lows, he does hold sympathy for English soccer manager Gareth Southgate and the criticism he has received since Sunday's European Championship final defeat to Italy on penalties.

"It was an intriguing battle and the early goal brought the Italians out of their shell and they had to go and fight for it in the second half and they showed class in doing that," he said.

"I enjoyed the tournament overall and there were some good games. Gareth Southgate spent a month getting paths on the back and in the space of 10-seconds he started getting a kicking and that's no surprise."

Any learnings for an inter-county hurling manager?

"I was watching the interactions in the huddles when they were getting ready for the penalties and the two groups were complete polar opposites - the Italians seemed to know without it being spelt out who was doing what, whereas the English camp appeared to need to give that detail out and go through it but every camp is different," he said.

"I am a Match of the Day fan and I would watch a bit of soccer every Saturday night for an hour and I enjoy it and the analysis of it. It's nice to switch off from hurling every now and then as well even if it is only for an hour of a Saturday or Sunday night."