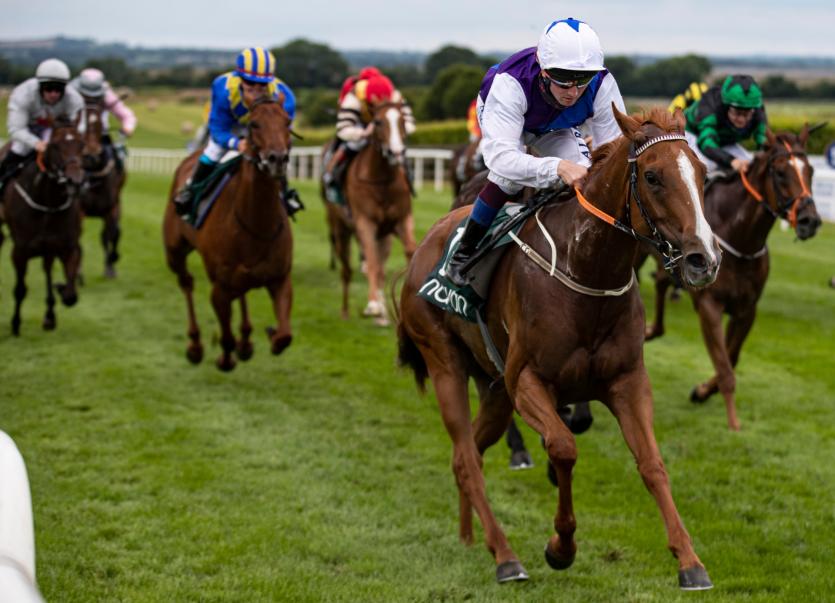 SHANAGOLDEN jockey Chris Hayes helped County Louth trainer Harry Rogers to his first success of the year when Clifftop scored a last-gasp success in the nine-furlong handicap at Leopardstown on Thursday.

Carrying the colours of Aintree Grand National winner Numbersixvalverde, the five-year-old is co-owned by Clare man Bernard Carroll, Ralph Kelly and Thomas Cox and he got up in the dying strides to score by a short-head.

The 22/1 chance pipped the Lee Smyth-trained 6/1 favourite Duquesa Beach. Rogers commented, “It was a long time coming but he got there. It’s nice to get one on the board and it keeps the thing ticking over.

"He’ll probably go over hurdles soon, he jumps well. He’s really a summer horse, the faster the ground the better he is.”

Limerick jockey Hayes made it two on the night when landing the Irish Stallion Farms EBF Nasrullah Handicap on the Henry de Bromhead-trained Mosala.

The 8/1 shot readily got the better of the Jessica Harrington-trained Tauran Shaman by three-parts of a length and the winning rider said, “Henry let me do my own thing. He said he had been dropping him in on his last two starts and I asked if I could ride him a little closer to the pace.

"They went hard early but then they steadied and he lit up a little bit on me. It was surprising how well he quickened and he was probably idling a little bit, the second horse helped him.”

Brothers Cathal and amateur rider Philip Byrnes combined to win the bumper at Cork on Friday evening with the Cora Byrnes-owned Elusive Rain. The 3/1 joint-favourite went clear before the straight and held the late run of the John Kiely-trained Hi Stranger by a length and a half.

The winning trainer commented, “We had him ready to run last year but he had a slight setback so we decided to keep him for a bumper. He goes well at home but the ground here was a concern. We’ll either go for a Flat maiden or a winners’ bumper now and he has done plenty of schooling too.”

At Kilbeggan on Friday evening, Cathal Landers took the first of eight races on the Andy Slattery-trained Whosgotyanow. The Oola conditional rider made all the running on the Dr Ronan Tynan-owned 11/2 chance which beat Sam Curling’s Belles Benefit by a cosy five lengths.

Chris Hayes notched up two more winners, for a couple of local trainers, at Navan on Saturday. He won the five-furlong handicap on the Liam McAteer-trained Amazing Emma, the 4/1 chance scoring by a length and a quarter from the Joseph O'Brien-trained Chitra.

Hayes was a last-gasp winner on Harry Rogers’ Clifftop at Leopardstown two days previously but he got up on the line to pip the same horse in the concluding 10-furlong handicap. This time, the tight photo-finish went his way on the Luke Comer-trained Clueless Hill with the 10/1 chance leading in the very last stride to deny Clifftop by a nose.

Ballingarry jockey Billy Lee landed another notable success as Pearls Galore scored an impressive win in the Group 3 Irish Stallion Farms EBF Brownstown Stakes at Fairyhouse on Sunday. The Paddy Twomey-trained 15/8 favourite took up the running early in the straight and powered to a two-length success over the Jessica Harrington-trained Valeria Messalina.

Twomey said: "She is a very well-bred filly and this race has been the plan all year as I wanted to make her a Group winner. I have her in the Matron Stakes at Leopardstown on Longines Irish Champions Weekend and I’d say that will probably be the plan.”

Rathkeale trainer Eric McNamara and conditional rider Mark McDonagh made the most of the late opportunity afforded to Silver Planeur to win the three-mile two-furlong handicap hurdle at Sligo on Sunday.

The nine-year-old only got into the race as the second reserve but at odds of 16/1, she raced to a 14-length success over the Mark McNiff-trained Pump Road in the colours of the Rathkeale House Syndicate.

Trainers Aidan O'Brien and Ken Condon enjoyed significant success overseas at the weekend. At Belmont Park in New York on Saturday evening, O'Brien landed a Grade 1 double which he shared with Ryan Moore. Bolshoi Ballet paid a timely tribute to Galileo with success in the Belmont Derby, a 92nd top-flight winner for the world champion sire which had died earlier that day.

Team Ballydoyle also landed the Belmont Oaks with Santa Barbara which didn’t get the clearest of runs but got up close home for her first success of the season. Ken Condon notched up his third Group 1 success when winning the Prix Jean Prat at Deauville on Sunday afternoon with the Charlotte Holmes-owned Laws Of Indices.

Bred by Nicky Hartery, the 28/1 chance battle well to hold the Joseph O'Brien-trained Thunder Moon by a head. Condon had previously enjoyed top-level success with Romanised in the 2018 Tattersalls Irish 2,000 Guineas and the 2019 Jacques le Marois, also at Deauville.