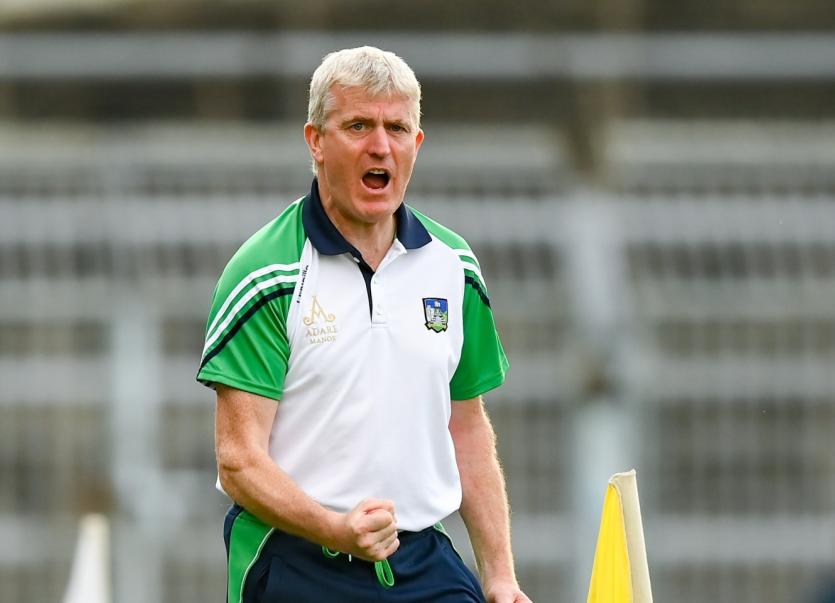 “THE bottom line for us is getting through,” explained John Kiely after Limerick’s eight point Munster SHC semi final win over Cork.

Positives and negatives for the Limerick manager as his side booked their place in a third successive provincial final.

“Coming into the game for us it was about trying to get a performance - at times we really found it but at other times we lacked a bit of accuracy. In the second half one key aspect was that we had five yellow cards coming into it and we didn’t take those guys off because we trusted them to be disciplined in their tackling and they were and didn’t pick up another yellow in the second half which was a telling factor. We were very disciplined in the second half in our tackling and that meant we were able to track guys down on their runs and turn over on our own ‘21 or ‘45 and counter attack where the space was.”

He added: “Hats off to the lads in the second half, I thought they did fantastically well and the boys off our bench made a huge impact in the last 20-minutes as well”.

There were a number of key moments which laid the foundation for the Limerick win.

And it all started with Nickie Quaid’s first half penalty save.

“These are big moments in games. You trust these guys to pull off these saves because Patrick Horgan on a penalty well you would back him nine times out of 10 or 99 out of 100. To be fair to Nickie, he did his job and did it well and picked up the spoil and distributed well,” recalled Kiely.

Limerick were reduced to 14-men for a 10-minute period with Peter Casey sent to the line for his foul on Conor Cahalane for the penalty.

“To be fair to Paul Kinnerk he had it organised while I was thinking about it - he had it done and that’s what he is really good at and he had it sorted in a second. He had spotted what needed to be done and he got it done. I think it’s a great experience for us to be through that as a team and if it happens again we have had that experience and we might not have liked it at the time or wanted it but it didn’t punish us which is a great testament to how hard the team worked during that period and a good reference point for us going forward into the next series of matches,” said Kiely.

Then there were two goals in 90-seconds of first half injury time.

“They were two great moves and I’m delighted with them because we have been working really hard for many many years on our goal taking. Sometimes they don’t come about but I thought the boys worked the ball really in the last couple of passes in there in the final third for those two moves and we finished them off really well.”

Limerick were six clear at half time and still six between the teams at the second half water break.

“It didn’t feel like a cushion to be fair - it felt like a drawn game for many stages in that second half.

Every single score was valuable at that stage and we kept creating scoring chances and didn't allow the errors, or mishits or dropped shots to affect us and we kept going after it. At the same time we have a huge amount to work on because we wouldn’t be at all happy with that,” he said of Limerick’s 20 wides.

“We really battened the hatches there in the last 20-minutes - we turned over a load of ball in our defence that they have taken into it and we used it well and created lots of scoring chance - we have a good wides total to go after and we would not be happy with our shooting overall and maybe from where we shot at times but that is something for next week when we go back to training.”