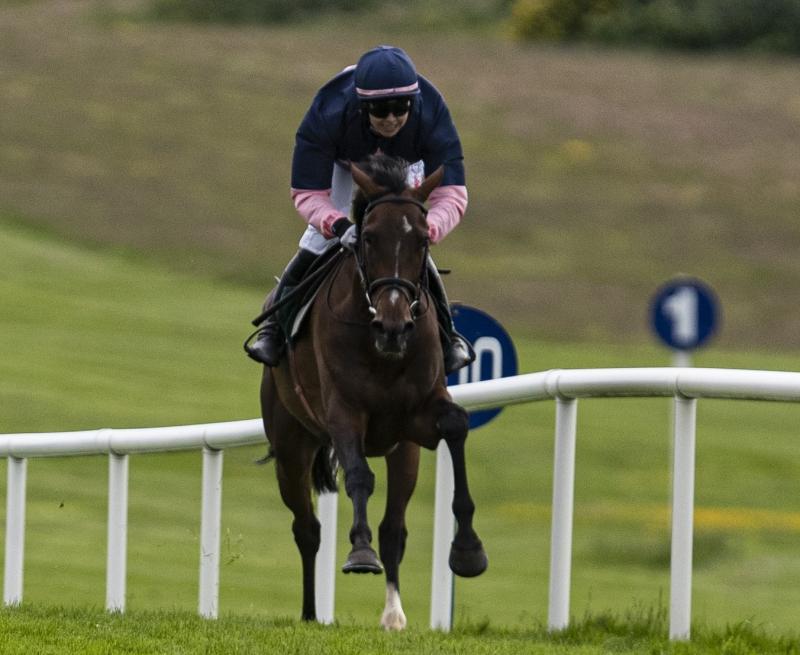 LIMERICK jockey Chris Hayes capitalised on a spare ride for in-form trainer Tim Doyle by galvanising Lisabetta to a head and nose triumph in a thrilling finish to the first split of the Goresbridge Handicap at Gowran Park on Monday last.

Over at Kilbeggan, Herbertstown jockey Donie McInerney was another to pick up a fruitful spare following an injury to Trevor Ryan, getting legged up on Edward O’Grady’s consistent chaser The West’s Awake, who confirmed his wellbeing and also gained an exemption from balloting for next month’s Galway Plate, in which he finished fourth last year, by recording his fifth triumph over fences in the Galway Races Galway Plate Trial Handicap Chase.

Seamus Braddish was not able to call on Cathal Landers, due to injury, but super sub Mike O’Connor provided the Askeaton handler with a winner at Wexford on Wednesday when guiding Brogine to win the Tuskar Handicap Chase a one and three-quarter lengths.

Another Askeaton native, Áine O’Connor was legged up on Forgetthesurprise by her future father-in-law, Niall ‘Boots’ Madden for a facile triumph in the second division of the Gormonlough Handicap Hurdle later that evening in Navan, O’Connor able to ease right down at the line and still prevail by 13 lengths.

Ballingarry's Billy Lee was in form at Leopardstown on Thursday, riding winners for two loyal supporters. Willie McCreery put him up on Coill Na Sionainne to take the Leopardstown Handicap and he followed up immediately with an eye-catching success in the Leopardstown.com Median Auction Maiden on Beamish for Paddy Twomey.

Ballingarry-based trainer Richard O’Brien continued his fruitful run with his fifth winner of the campaign from just over 40 runners, Scott McCullagh and Musalal knuckling down to fight of Fridtjof Nansen in the Leopardstown Golf Course & Driving Range Handicap over six and a half furlongs.

Abbeyfeale claimer, Paddy Harnett made the most of the opportunity on Donnacha O’Brien’s Igraine, to upset odds-on favourite Lunar Power and triumph in the Sandycove Handicap at 22/1.

Cathal Byrnes clocked up his first winner as licence holder at his local Limerick track on Friday night, Run For Mary battling to a neck and head triumph in the Shanagolden Handicap under Colin Keane.

And Paddy Harnett made two in as many days on Sequoiaspirit in the 1m 3f Patrickswell Apprentice Handicap, moving into fourth five furlongs out before gaining a narrow advantage and staying on best in the closing stages.

Chris Hayes delivered the goods in the saddle for Willie McCreery, guiding Cherry Bloom to a one-and-a-quarter-length winner in the Lagan Valley Steels Maiden at Down Royal on Saturday.