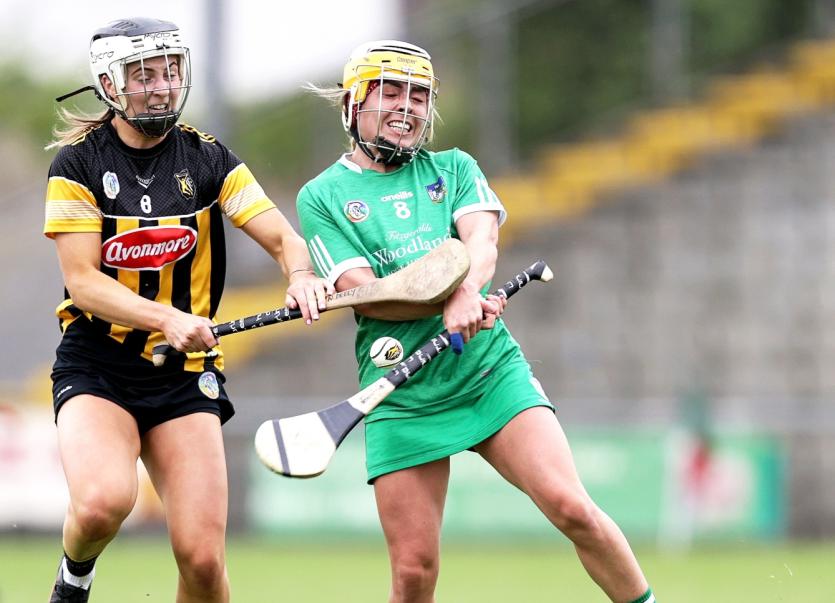 TENACIOUS Limerick gave All-Ireland champions Kilkenny the biggest of frights before succumbing by three points, 0-13 to 2-10, in their thrilling Littlewoods Ireland Camogie League Division 1 quarter-final played in Birr on Saturday.

Limerick will be hurting for a while after this defeat, for it was a game they could well have won and would have done so, but for two brilliant saves by Kilkenny goalie Aoife Norris, and two strong runs and assists by Miriam Walsh for Mary O’Connell and Aoife Doyle goals.

Denise Gaule showed her leadership and experience in the second half especially, and weighed in with six points, but Cats manager Brian Dowling will know his crew, while displaying fantastic character, were fortunate not to be subject of what would have been a huge shock defeat.

Limerick led for most of proceedings and were full value for that lead, as they exposed weaknesses in a Kilkenny defence without Davina Tobin and Claire Phelan. That was down to a relentless workrate and a directness of play, either through lengthy deliveries or pacy running right down the middle.

Kilkenny hit the front early on with a point from Laura Murphy but their opponents were playing with confidence and were soon two clear, Rebecca Delee equalising after Sophie O’Callaghan had won a dirty ball, and Caoimhe Costelloe shot the first two of her seven points.

The industrious Niamh Deely needed to be alert to deny Delee a shot at goal and Delee, Caoimhe Lyons and Áine Fitzgerald certainly made life uncomfortable for Kilkenny. Judith Mulcahy and Niamh Ryan were dominant in the Limerick half-back division while Megan O’Mara covering the ground at either end of the pitch.

O’Connell’s 19th minute goal came against the run of play and it had its genesis in a tremendous fetch by Kellyann Doyle from Laura O’Neill’s puckout, after Murphy had shot her second point.

When the sliotar was propelled forward, it was gathered smartly in a wide position Walsh often likes to drift out to from full-forward. The alacrity of her spin certainly caught Muireann Creamer unaware. She soloed towards the danger zone, drew Mulcahy before executing the hand-pass perfectly for O’Connell to finish with ease.

It said much for the mental fortitude of the Limerick players that they shook off the setback, registering four of the next five points. Costelloe (two), O’Callaghan and O’Mara raised white flags to make it 0-8 to 1-4 at the interval.

It might have been even better as Delee had a glorious goal chance after Deborah Murphy and O’Leary had pierced the heart of the Cats’ spine but Norris left her line with impressive speed to block with her body.

Gaule levelled it up from an early free at the start of the second period but three more points from play by Costelloe, Cunningham and Niamh Ryan moved Limerick three ahead.

There is a steeliness about Kilkenny of course, a pedigree and pride that comes with being All-Ireland champions and they shot the next goal and four points in the game’s defining period.

Dowling and his brains trust deserve some credit, as they switched Walsh out to the ’40 in a bid to gain more traction there and nullify the influence of Mulcahy, who had been the best player on the park.

The Ahane player continued to get on plenty of possession but it was a Walsh foray through the middle that set up the critical second major. Again she attracted the cover and slipped a pass, this time to Katie Nolan. Her shot was brilliant stopped by O’Neill but Aoife Doyle was on hand to finish first time off the sod.

Gaule added a pair of points, including a magnificent score from play on the left flank, to push four ahead but Pat Ryan’s challengers continued to pour forward, Norris being forced into another smart save from Cunningham’s ground shot.

They did get it back to two, courtesy of a Costelloe 45 from that stop and another neat finish by Dearbhla Egan but Kilkenny had given themselves enough breathing space and ground it out, Nolan having the final say.