Will Addison banned after red card against Munster Rugby 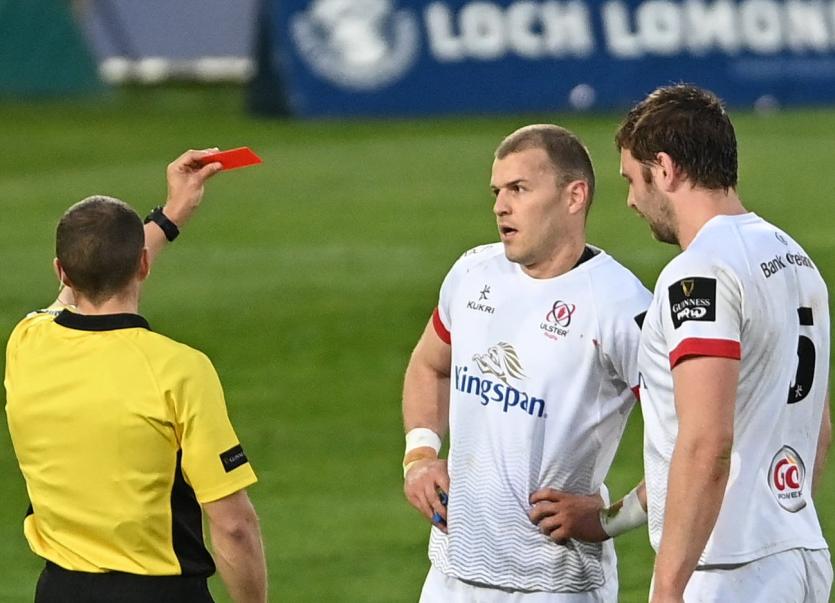 Referee Craig Evans shows a red card to Will Addison, of Ulster, centre, during the Guinness PRO14 Rainbow Cup match with Munster at Thomond Park on Friday last

ULSTER Rugby's Will Addison has been banned for a period of four weeks as a result of his red card in the Guinness PRO14 Rainbow Cup Round 2 fixture with Munster on Friday last.

Ulster centre Addison was shown a red card by Referee Craig Evans (WRU) under Law 9.13 – A Player must not tackle an opponent early, late or dangerously.

Addison was dismissed for an illegal challenge on Munster winger Shane Daly in the first half of the game which the home side won convincingly.

The Disciplinary process for the red card offence was presided over by Judicial Officer Rhian Williams (WRU) who concluded that a mid-range offence had occurred, with a mid-range entry point of six weeks.

In order to determine the ultimate sanction, the Judicial Officer considered the lack of aggravating circumstances and the range of mitigating factors advanced by the Player.

The Player is suspended from participating in the next four meaningful matches. Should a game be cancelled or postponed during this window of games, the Player and PRO14 are to submit updated fixtures to the Disciplinary Panel so the return date can be advised.