Winners flow for Limerick jockeys on the track 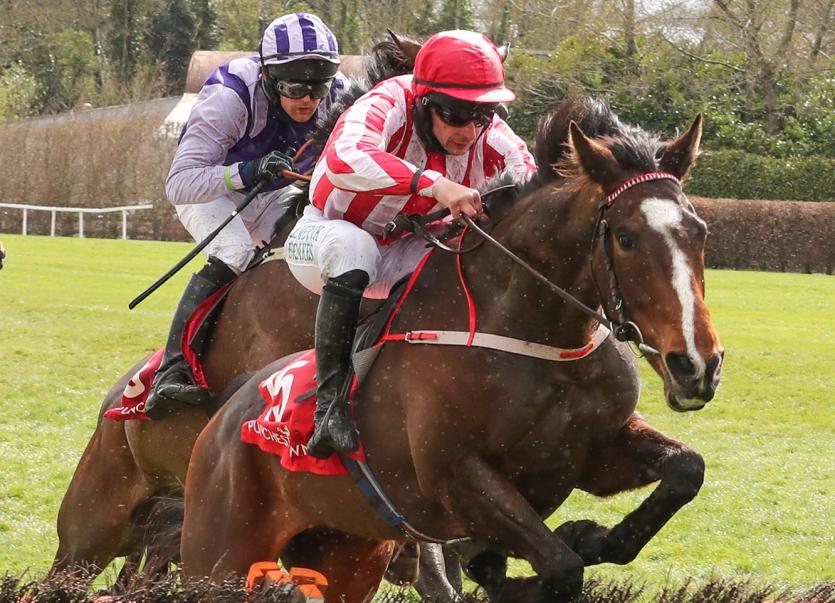 CONDITIONAL rider Conor McNamara played his part as Willie Mullins took Punchestown by storm on the opening day of the Festival on Tuesday last.

Mullins saddled five winners and the Rathkeale man rode the first of them as Jazzaway came out on the right side of a photo-finish to the two-mile handicap hurdle. The Whitegrass Racing syndicate-owned 10/1 chance prevailed by a short-head from the Denise Foster-trained Call Me Lyreen to give McNamara his 27th success of the season, comfortably his best tally to date.

The gambled-on 11/2 chance got the better of the Willie Mullins-trained 3/1 favourite Hara Kiri by two and a half lengths in the winning trainer’s own colours. It was Byrnes’ sixth winner of the season.

Byrnes and Mullins combined to win the final race of the festival on Saturday when Carrarea, owned by the trainer’s father George, landed a hefty gamble in the bumper. Backed from 11/2 to 5/2, the four-year-old gamely saw off the Lorna fowler-trained Naughtinesse by a length and a half.

At Punchestown on Thursday, Oola conditional rider Cathal Landers partnered the Jimmy Barcoe-trained Jiving Jerry to win the two-mile handicap hurdle. A fair gamble was landed as the 11/2 chance came home half a length to the good over the Ciaran Murphy-trained Flindt.

Ballingarry jockey Billy Lee was involved in a rare dead-heat at Naas on Monday. At the conclusion of the opening division of the eight-furlong handicap, the judge was unable to separate Lee’s mount Blue Raven, at odds of 28/1, and the Cian MacRedmond-ridden 11/2 shot Hidden Spark.

The winners were trained by Paul Stafford, for owner Joe Keeling, and Ado McGuinness, for the Quantus Syndicate, respectively.

Two legendary Irish trainers captured the first Classics of the season at Newmarket last weekend. Jim Bolger sent out 16/1 chance Poetic Flare to win the 2,000 Guineas on Saturday and immediately declared that his Kevin Manning-ridden winner was “the most complete racehorse I’ve ever had”.

The following afternoon, Aidan O'Brien won the 1,000 Guineas for the seventh time as the Frankie Dettori-ridden Mother Earth prevailed by a length at odds of 10/1. Both horses could reappear in the Irish Guineas at the Curragh in three weeks’ time.