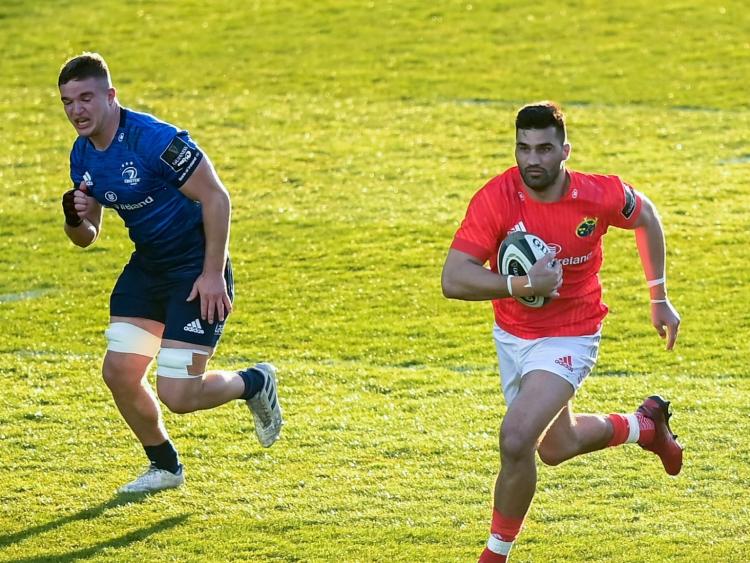 MUNSTER'S World Cup winning centre Damian de Allende admitted to feeling a sense of relief as the side ended their six-game losing run against Leinster with a comprehensive 27-3 victory over their arch rivals in the new Guinness Rainbow Cup at the RDS on Saturday night.

Munster had lost to Leo Cullen's Leinster five times since since the resumption of rugby last August prior to kick off in Dublin 4.

However, two tries from Conor Murray and a penalty try late on eased Johann van Graan's charges to victory against a Leinster side which faces a mammoth Heineken Champions Cup semi-final clash with Ronan O'Gara's La Rochelle next weekend.

Springbok star De Allende turned in a  Man of the Match display for Munster, making a terrific break in the lead-up to the first of Murray's try early on.

Afterwards de Allende said: "Ya, it was good. Obviously we missed out in the final (Pro14) and it was quite frustrating. I felt we bounced back a bit against Toulouse and it gave us a bit of confidence.

"I know this probably wasn't their (Leinster's) strongest side, on the field today, but I still think we came here to execute and we still did execute.

"We just felt the momentum shifting towards us at the end of the first half."

"We got put under a lot of pressure tonight and I thought we handled it very well. I think defending close to our own tryline, stopping them and it changed the game a lot, so big credit to the forwards I think.

"It is always nice (to make a line-break), obviously it would be nice to score a few more tries, but I don't mind setting them up as well. Obviously made a nice break and I'm just glad we finished it off. Ya, it was nice to get a bit of freedom like that and hopefully we can all experience it in the coming weeks."

De Allende admitted there was a feeling of relief in the Munster dressing room to have finally ended their losing run against their arch rivals.

De Allende said: "They are a world class outfit, probably the best team in Europe over the past five years, so to beat them especially at the RDS, we know - like I said earlier it is probably not their strongest side - but they have a lot of history and culture here at the RDS, so it is nice to win one here and hopefully we can use this momentum and carry on."