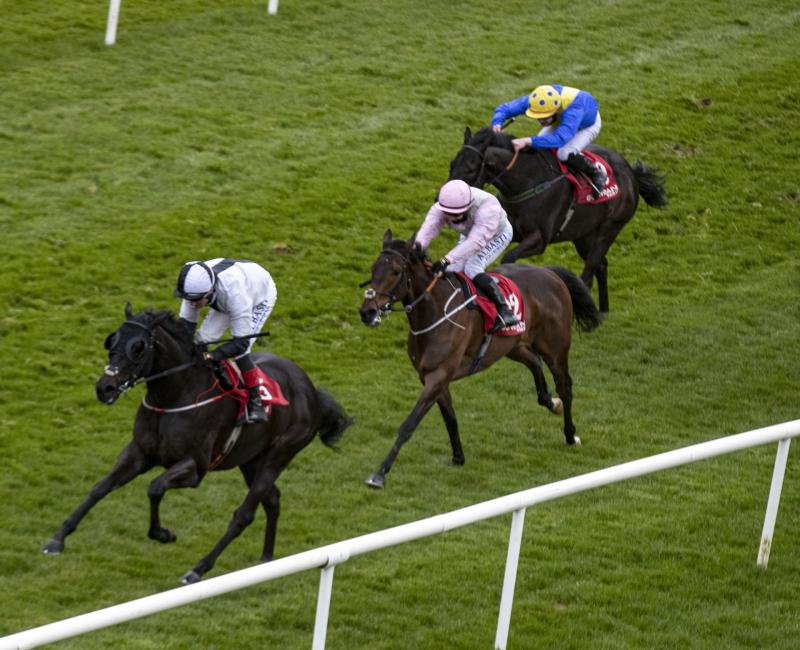 LIMERICK jockey Chris Hayes is tipping along nicely in the early weeks of the new Flat season and he was on the mark for the fifth time when taking the nine-furlong maiden at Gowran Park on Wednesday last on the Mathew Smith-trained Fil The Power.

Shanagolden horseman Hayes brought the 100/30 chance from off the pace and at the line had two and a half lengths to spare over the Joe Murphy-trained Sionnach Eile.

Hayes landed more success on the John Geoghegan-trained Chateau Musar at Dundalk on Saturday. The four-year-old was winning his third race of the year and his fourth in all and Hayes has been in the saddled on each occasion.

He timed his run well as he brought the 11/2 chance from the back of the field for a narrow success in the 12-furlong handicap. He beat Edward O'Grady’s Top Line Tommy by a nose and Geoghegan commented, “It’s unbelievable, that’s four wins up here now so he owes us nothing and he was up in grade today. There is a 0-85 this Sunday but we might just wait for the grass now. We can’t complain as we’ve had a great winter.”

Ballingarry jockey Billy Lee was also on the mark at Dundalk where he won the opening division of the 10-furlong handicap on the Anthony McCann-trained Ragtime Red.

At odds of 22/1, the six-year-old was easily the longest-priced winner of the afternoon and he beat the Pat Martin-trained Quiet Desire by two and three-parts of a length in the colours of owner Rita Shah.

The dominance of Irish jump racing was very much in evidence at Aintree where the trailblazing Rachael Blackmore stole the show with her historic winning ride on the Henry de Bromhead-trained Minella Times in the Grand National on Saturday.

Remarkably, 10 of the first 11 horses to cross the line were trained in Ireland and in all, six different Irish trainers sent out seven winners over the three days of the festival.

In addition to the Grand National success, Denise Foster was responsible for two Irish-trained winners, Abacadabras and Tronador, both ridden by Jack Kennedy.

Arthur Moore took the Grade 2 mares’ bumper with the Blackmore-ridden Me Too Please, Peter Fahey and Kevin Sexton shared Grade 1 success with Belfast Banter, Joseph O'Brien and Mark Walsh scored with Fakir D'oudairies and Willie and Patrick Mullins were winners over the Grand National fences with Livelovelaugh.

BoyleSports Irish Grand National hero will have the Aintree Grand National as next season’s aim after his famous success a little closer to home on Easter Monday.

“You’d have to start thinking about the English National for him now, that's where I’ll be aiming him next year. I’d say Aintree would suit him. Jumping is his forte and all he does is keep going and keep galloping.

"Once he gets top of the ground, that’s all that matters to him. He’s not overly big either so he might have a nice racing weight in it too, like he had at Fairyhouse.”