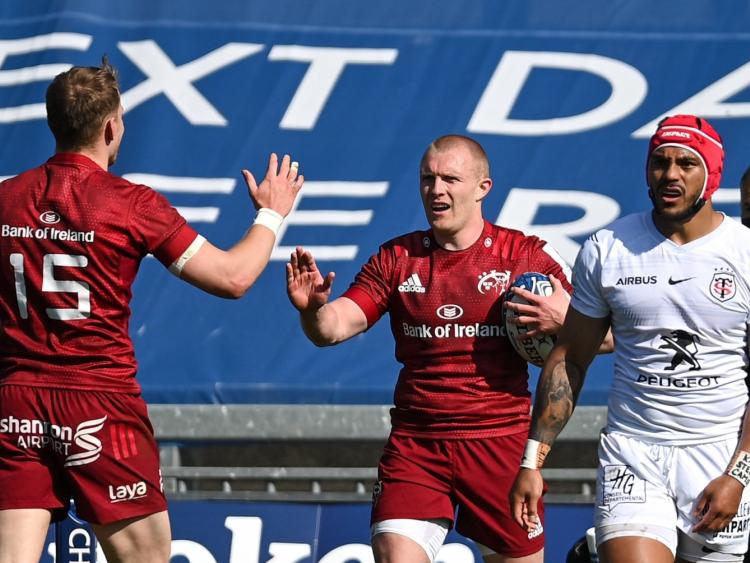 Munster's Keith Earls, centre, is congratulated by Mike Haley after scoring his second try in their Heineken Champions Cup clash with Toulouse at Thomond Park on Saturday

MUNSTER dream of Heineken Champions Cup glory was shattered by French champions Toulouse in a 40-33 last 16 defeat at a sun-drenched Thomond Park on Saturday.

The result capped a bitterly disappointing seven days for Munster who suffered a deflating Guinness PRO14 final reverse at the hands of Leinster at the RDS a week earlier.

Unlike that defeat to Leinster, however, Munster remained right in this contest until the final moments and posed a consistent threat in attack throughout, scoring four tries with Keith Earls helping himself to a brace, while prolific back-row Gavin Coombes also dotted down twice.

However, the French side's mix of power, panache and strength off the bench proved crucial in the end.

The defeat ended Munster's 16-game unbeaten run in the Heineken Champions Cup dating back to 2015.

The home side were on the wrong side of the penalty count and will feel frustrated by a couple of crucial decisions which went against them on the day.

Munster led 16-9 at half-time, despite a slow start to the game, which included a yellow card for centre Chris Farrell early on.

Two tries from the fleet-footed Keith Earls, both excellent finishes, proved crucial in helping to build that half-time advantage.

South African World Cup winning centre Damien de Allende showed his class in the lead-up to both scores, especially the second five-pointer when he powered through the Toulouse midfield, rampaging deep inside their '22.

Munster suffered a blow before the break with Tadhg Beirne was forced off with an injury and was replaced by Billy Holland.

The home side were on the wrong side of the penalty count in that half, however, with Toulouse's French international out-half Romain Ntamack landing three kicks at goal.

Toulouse hit back with four second half tries of their own from Matthis Lebel, Julien Marchand and two from their influential French scrum-half Antoine Dupont. The four-time Heineken Cup winners are into the last eight now, were they will meet Clermont Auvergne in next week's quarter-final.