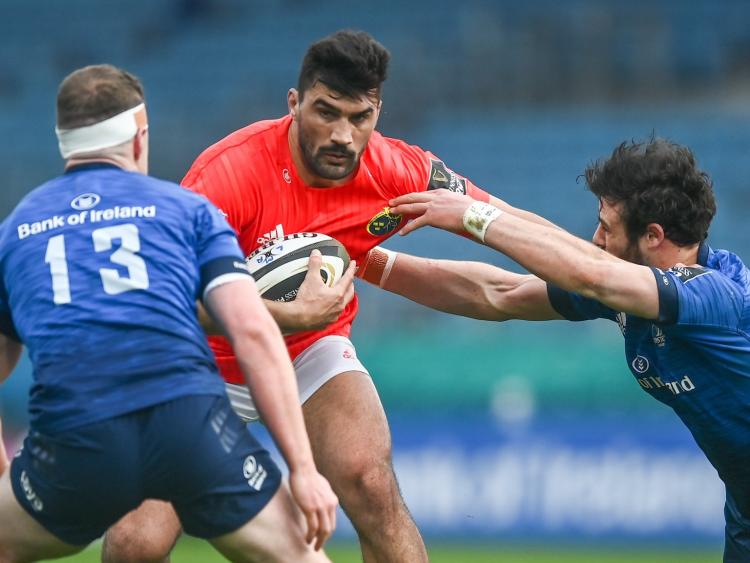 Munster's Damian de Allende is tackled by Robbie Henshaw, of Leinster, during Saturday's Guinness Pro14 final at the RDS, Dublin

MUNSTER Rugby's dream of winning a first Guinness PRO14 final in a decade were shattered in a comprehensive 16-6 defeat to arch rivals Leinster at the RDS on Saturday afternoon.

Leo Cullen's charges monopolised possession and territory for long stages of the game and while Munster clung onto their coat tails to be level, 6-6, at half-time, a 46th minute Jack Conan try finally turned the final in their favour.

Munster struggled to get anything going in attack, failing to register a single point in the second half in windy conditions.

This was a sixth successive defeat for Munster against their provincial rivals and a tenth defeat in the last 11 meetings between the sides.

Munster's sense of disappointment was compounded when team captain Peter O'Mahony was forced off with a 48th minute injury.

Despite Leinster's superiority in terms of possession and territory during the opening half, Munster found themselves level at half-time, 6-6.

The visitors were fortunate to be on terms after that opening period.

After Munster failed to deal with the kick-off, Leinster took the lead when Ross Byrne landed a third minute penalty and he doubled his side's advantage with a second successful kick at goal in the 11th minute.

Uncharacteristically, Leinster displayed a lack of composure with ball in hand deep inside the Munster '22 on a number of occasions in that opening half with their opponents defence stretched to breaking point.

Gavin Coombes, the only player on either side not capped at full international level, was the one Munster ball carriers to consistently make any inroads into the Leinster defence during a hugely physical opening half.

To their credit, a gritty Munster side soaked up the best their opponents could muster and hauled themselves level by half-time, thanks to two penalty goals from the boot of Joey Conway in the 12th and 40th minutes.

Man of the Match Conan barrelled over for the game's opening try in the 46th minute, with Byrne adding the extras for 13-6.

A 68th minute penalty from Byrne sealed victory for Leo Cullen's charges on a bitterly disappointing day for Munster.