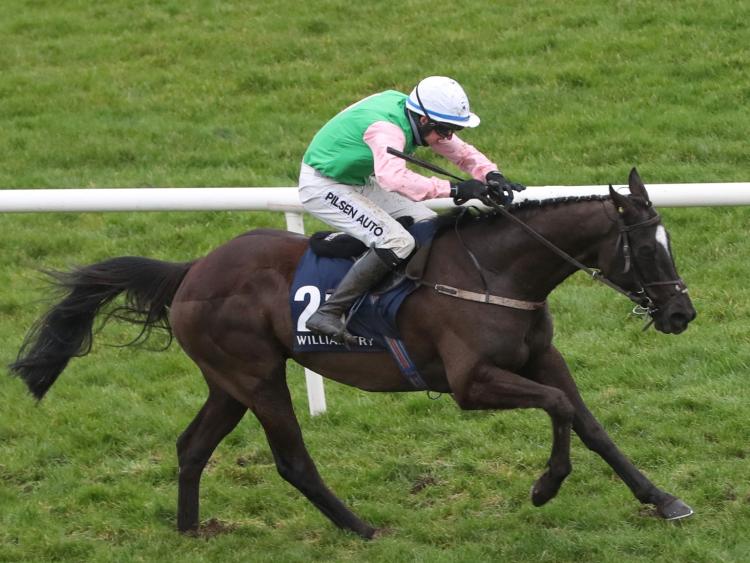 Off You Go added to back-to-back wins in the Ladbrokes Hurdle at the meeting in 2018 and 2019 with a gutsy success in the Gaelic Plant Hire Handicap Chase. Brilliantly ridden by Mark Walsh, the 10/1 chance got up late on to win by half a length from the Henry de Bromhead-trained Minella Times.

It was far easier for McNamara who rode his second winner for champion trainer Willie Mullins as Maze Runner took the William Fry Handicap Hurdle by an easy four and a quarter lengths from the Oliver McKiernan-trained Unexpected Depth. McNamara reduced his claim to 3lbs in the process.

He shared his haul with three different trainers including his brother Patrick. But it was Waterford trainer John Flavin that gave the Limerick star his first success of the day when 5/1 chance Doyouthinkso won the second division of the 12-furlong handicap.

The Darren Bunyan-trained 11/1 chance Never Seen Before was next up as he prevailed by half a length in the three-year-old seven-furlong handicap and Hayes’ treble was completed when the Patrick Hayes-trained Gatsby Cap, the 4/1 favourite, won the second division of the seven-furlong handicap for older horses in the colours of the Gatsby Gangsters Syndicate.

It was only the second winner that the Hayes brothers have combined for, the first came at Ballinrobe in 2006 when Chris was the country’s leading apprentice.

Owned and bred by James Wallace, the 11/4 chance came from well off the pace to score by a length and three-parts from Dance Emperor.

Willie Mullins has made the Dublin Racing Festival his own and the champion trainer dominated the latest renewal at Leopardstown last weekend.

Mullins won nine of the 15 races on Saturday and Sunday, capturing six of the eight Grade 1 races in the process.

While the Chanelle Pharma Irish Champion Hurdle went to the brilliant Honeysuckle for Henry de Bromhead and Rachael Blackmore, Mullins won the three remaining Grade 1 events on the opening afternoon, sharing each success with Paul Townend.

The pair won the Nathaniel Lacy & Partners Solicitors ‘€50k Cheltenham Bonus For Stable Staff’ Novice Hurdle with the impressive Gaillard Du Mesnil, in the colours of Marie Donnelly, the well-backed 13/8 favourite scored a five-length success over the Mouse Morris-trained Gentlemansgame.

Chacun Pour Soi is a class above in the two-mile chasing division and he justified his odds of 2/5 favourite to land the Grade 1 Ladbrokes Dublin Chase.

Another odds-on favourite, he led home a 1-2-3 for the stable with an easy win over Franco De Port and Blackbow. For good measure, Mullins and his son Patrick won the Grade 2 Goffs Future Stars INH Flat Race with Margaret Masterson-owned 11/10 favourite Kilcruit.

Joseph O'Brien won the Matheson Handicap Chase with his Grade 1 winning hurdler A Wave Of The Sea.

The first of two winners on the afternoon for Simon Torrens, the 12/1 chance beat his own stable companion Top Moon by a neck with the Emmet Mullins-trained 7/2 favourite The Shunter back in third place.

Torrens rode his second winner on the Pat Fahy-trained Drop The Anchor which took the Ladbrokes Hurdle by a length and a half from the Henry de Bromhead-trained Champagne Gold. Like A Wave Of The Sea, the 8/1 winner is owned by JP McManus.

It was more of the same on Sunday as Kemboy starred to give Willie Mullins his 11th success in the Paddy Power Irish Gold Cup.

A first win in the race for the trainer’s nephew Danny, the 11/4 chance readily got the better of Gordon Elliott’s The Storyteller with Delta Work back in third place and 13/8 favourite Minella Indo only fourth for de Bromhead and Rachael Blackmore.

Mullins and Townend had won the earlier Grade 1 Chanelle Pharma Novice Hurdle with 1/3 favourite Appreciate It, another for owner Margaret Masterson, and the pair also claimed the Grade 1 Flogas Novice Chase with Monkfish, the 1/2 favourite in the colours of Susannah and Rich Ricci.

The meeting ended on a high for Mullins as Jody Townend partnered the Syndicates.Racing-owned Grangee to a narrow success over the Elliott-trained Party Central in the Grade 2 Coolmore NH Sires Kew Gardens Mares INH Flat Race.

Elsewhere, Gordon Elliott won the Grade 1 Tattersalls Ireland Spring Juvenile Hurdle with the Jack Kennedy-ridden Quilixios and Charles Byrnes and Mark Walsh combined to take the Gaelic Plant Hire Leopardstown Handicap Chase with Off You Go, the 10/1 shot winning a thriller to give JP McManus another major handicap success.