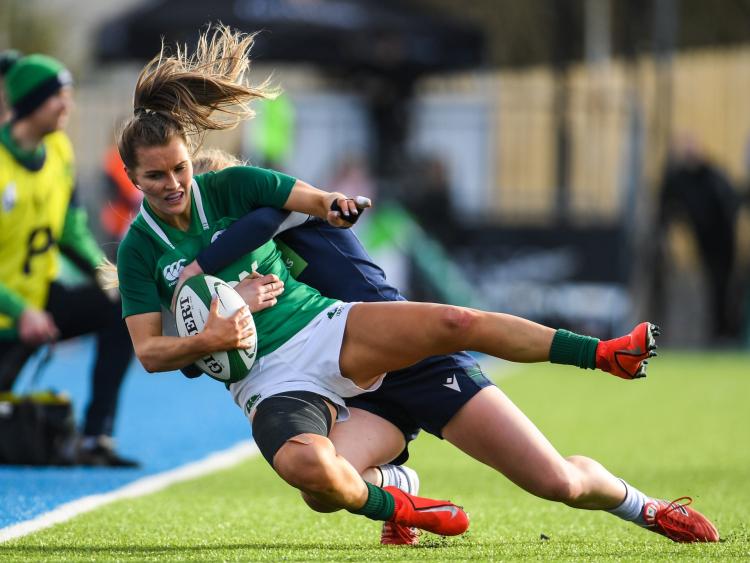 Limerick woman Aoife Doyle, of Ireland, is tackled by Megan Gaffney, of Scotland, during the Women's Six Nations fixture at Energia Park 12 months ago

Today’s announcement comes following the recommendation of a working group specifically tasked to examine various rescheduling options after the decision was taken on January 12th to postpone both Championships due to the ongoing challenges presented by Covid-19.

Starting on the weekend of 3rd/4th April and finishing on 24th April, this year’s Women’s Championship will see a new and condensed format similar to that of the recent Autumn Nations Cup, culminating in a Grand Final weekend to crown the Six Nations Champions 2021.

The format will comprise of two pools of three teams with each team playing one home and one away fixture.

Once the pool round matches are complete, teams will face off against the opposing ranked team from the other pool in the play-offs matches, i.e. 1st place Pool A v 1st place Pool B.

The detailed fixture dates, venues and kick off times will be announced in due course.

Six Nations Rugby also confirmed today its intentions for the 2021 Under-20 Championship to take place across June and July in the same format as originally planned, but through a condensed three-week period.

This plan will ensure all six nations provide appropriate experience of such tournaments for the 2021 Under-20 generation. The tournament is expected to start on June 19th and further planning work is required to finalise details on fixtures, venues and kick off times which will be shared in due course.

World Rugby today confirmed the 2021 World Rugby U20 Championship will not take place.

“The World Rugby U20 Championship 2021 will not take place this year due to the ongoing impact of the global Covid-19 pandemic. The decision was made by World Rugby in consultation with potential hosts and participating unions.

"World Rugby is now working with regions and unions to identify regional competition opportunities in a safe environment, reflecting the international federation’s ambition to support meaningful high performance competition pathways for the future stars of rugby.”