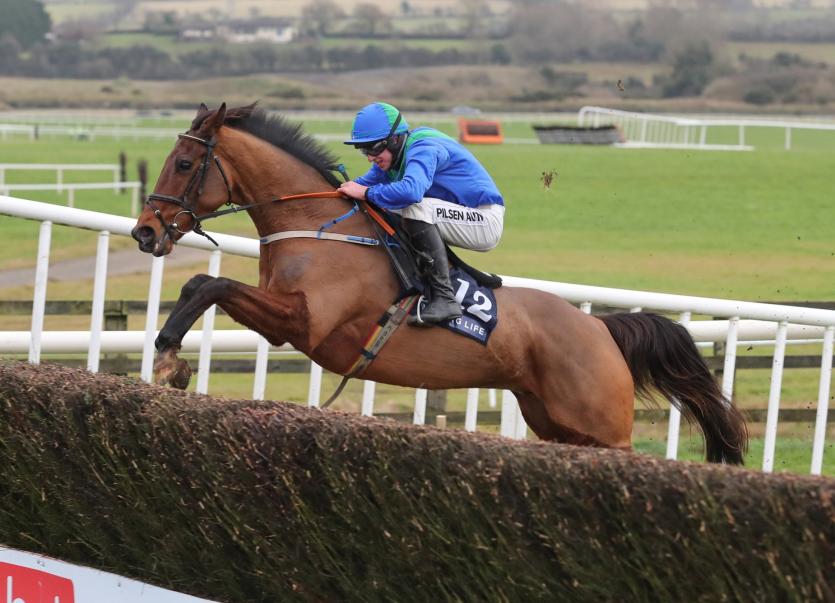 Hayes took the opening two races on the afternoon card, both divisions of the 12-furlong handicap. The Darren Bunyan-trained Stay With Me was first up and the talented Limerick horseman made all the running on the strong 3/1 favourite to score by three-parts of a length from the John McConnel-trained Wave Walker.

Pempie, trained in Castlecomer, County Kilkenny, by Pat Murphy, gave Hayes his second winner with a length and a quarter victory over another McConnell runner, this time Empire Street, in the second leg. The 13/2 chance had a little more in hand than the winning margin might suggest.

Also scoring with a bit to spare was the Charles Byrnes-trained Light Brigade which won the two-mile maiden hurdle at Fairyhouse on Tuesday for his Ballingarry handler. A strong 2/5 favourite under Kevin Brouder, the five-year-old only needed to be pushed out to hold the challenge of the Gordon Elliott-trained 100/30 chance Purdey’s Gift by half a length.

Askeaton trainer Davy Fitzgerald landed the second division of the two-and-a-half-mile handicap hurdle with Hilltop Supreme which is owned by Belinda O’Brien. The 9/1 chance completed a double on the day for Kevin Brouder as he beat the Denise Foster-trained 11/4 chance Memory Of Youth by three-parts of a length and he now heads to Down Royal next week for a handicap chase.

Rathkeale jockey Conor McNamara partnered the Declan Queally-trained Uisce Solas to win the two-mile-three-furlong handicap hurdle at Naas on Wednesday. It proved to be a comfortable success for the 5/1 chance which skipped clear in great style to beat the Michael McDonagh-trained Castle Town House by 12 lengths.

McNamara landed a second winner when taking the beginners’ chase at Punchestown on Sunday on Owl Creek Bridge, which is trained by his father Eric. It was an incident-packed affair and the well-backed 7/1 shot evaded all sorts of trouble in running to win by 12-lengths from the Ross O'Sullivan-trained Favori Logique.

The winning rider commented, “There was plenty of drama going on the whole way, and he had to make his own running after nearly half the field were taken out. He jumped electric and it’s good to get a beginners’ chase with him. He is owned by Patrick Mullen, Brian Collins and Denis Gould who are good supporters of my father.”