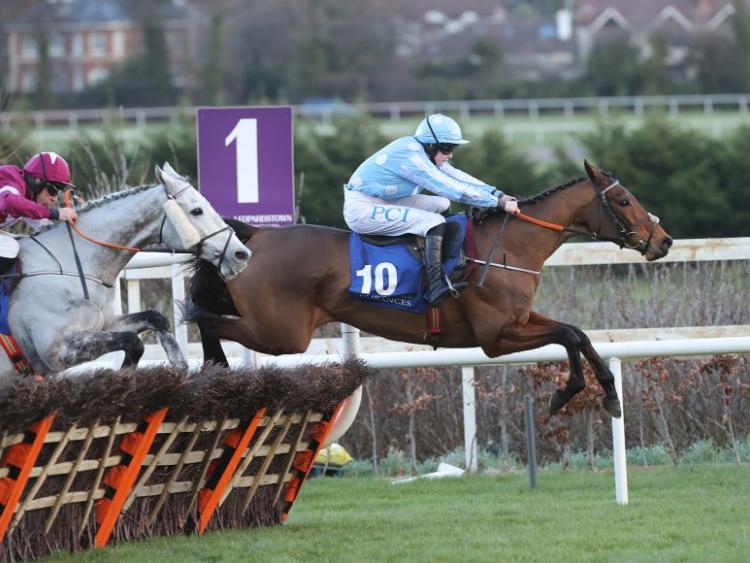 ALL eight Grade 1 races at the Dublin Racing Festival at Leopardstown on Saturday, February 6 and Sunday, February 7, have attracted strong entries.

The first three horses home in the Grade 1 Savills Chase at last month’s Leopardstown Christmas Festival are entered for the Paddy Power Irish Gold Cup while Honeysuckle and Sharjah head the way in the Irish Champion Hurdle, sponsored for the first time by Chanelle Pharma.

In all, there are 12 horses in the Paddy Power Irish Gold Cup on the second day of the festival with last-gasp Savills Chase winner A Plus Tard and Minella Indo both entered by Henry de Bromhead. Kemboy and Melon were second and third in the Savills Chase and along with Castlebawn West, have been entered by champion trainer Willie Mullins who is seeking an 11th win in the race.

Delta Work gave Gordon Elliott his first success in the Irish Gold Cup a year ago and he is there again for the Cullentra trainer who could also be represented by Battleoverdoyen, Presenting Percy, Samcro and The Storyteller. Ted Walsh has entered Any Second Now while Joseph O'Brien has Fakir D'oudairies.

The de Bromhead-trained Honeysuckle heads the nine entries for the Saturday highlight, the Grade 1 Chanelle Pharma Irish Champion Hurdle. She won this race last year and remains unbeaten in nine starts and her trainer has also entered Aspire Tower.

Willie Mullins’ team of three is headed by his triple Matheson Hurdle winner Sharjah which could be joined by Saint Roi and Saldier. Abacadabras and Petit Mouchoir, winner of the Irish Champion Hurdle in 2017 when trained by Henry de Bromhead, have been entered by Gordon Elliott while Noel Meade has Beacon Edge and Winston C, a dual Grade 1 winner in America, could be a first runner at that level in Ireland for newly-licenced Keri Brion who has taken charge of a number of horses that were formerly in the care of legendary US trainer Jonathan Sheppard.

The first of the weekend’s Grade 1 races is the Nathaniel Lacy & Partners Solicitors ‘€50,000 Cheltenham Bonus For Stable Staff’ Novice Hurdle and among the 35 entries are the Willie Mullins-trained course winners Gaillard Du Mesnil and Stattler.

Mullins has ten in the race while Farouk D'alene and Fakiera feature among Gordon Elliott’s entry of eight. The Emmet Mullins-trained Cape Gentleman, Gavin Cromwell’s Vanillier and the Mouse Morris-trained Gentlemansgame are other notable entries.

A Grade 1 for the third-time, the Ladbrokes Dublin Chase has attracted an entry of 11 including last year’s winner Chacun Pour Soi which impressed again at Leopardstown when taking the Grade 1 Paddy´s Rewards Club Chase for Willie Mullins at the recent Christmas festival.

His own stable companion Min chased him home in 2020 having won the race this previous year and when it was a Grade 2 in 2018 and the pair could well clash once again. Mullins has also entered Tornado Flyer which was second to Min in the John Durkan Memorial Punchestown Chase in December.

Henry de Bromhead’s Notebook, successful in the Arkle Novice Chase at last year’s Dublin Racing Festival, is another that could be meeting Chacun Pour Soi for a second time having finished second to the Mullins star at Christmas.

De Bromhead has also entered Ordinary World, runner-up to Min in 2019, while Gordon Elliott has Battleoverdoyen and Samcro, Jessica Harrington has Impact Factor and Sizing Pottsie, while Castlegrace Paddy and Fakir D'oudairies have been entered by Pat Fahy and Joseph O'Brien respectively.

Willie Mullins is responsible for six of the 15 entries for a mouth-watering renewal of the Grade 1 Arkle Novice Chase. The champion trainer has his top-flight Christmas winner Franco De Port, yesterday’s impressive Naas scorer Energumene and Asterion Forlonge on his early team while Envoi Allen, Andy Dufresne and Felix Desjy make up Gordon Elliott’s entry.

Darver Star is there for Gavin Cromwell, Paul Nolan has Latest Exhibition while Henry de Bromhead has another of yesterday’s winners Epson Du Houx, and the Naas runner-up Captain Guinness in the race.

The Grade 1 action on the second day of the Dublin Racing Festival on Sunday, February 7 begins with the Tattersalls Ireland Spring Juvenile Hurdle and Gordon Elliott looks to boast a strong hand with leading four-year-old hurdlers Zanahiyr, Quilixios and Duffle Coat among his team of five.

For good measure, Riviere D'etel made a winning debut for the stable at Punchestown and Teahupoo has recently joined Elliott on the back of a debut success at Auteuil in October.

French Aseel, a runaway winner for trainer Ellmarie Holden at the Leopardstown Christmas Festival, has been bought by Marie and Joe Donnelly and is one of four entries for Willie Mullins who also has the wide-margin Gowran Park winner Youmdor.

Josh D’id is another French import and he could represent Gavin Cromwell while Sam Curling has entered his Limerick winner Awkwafina, the Killarney winner Varna Gold is there for Paul Gilligan and Busselton, runner-up to Zanahiyr in the Grade 2 Knight Frank Juvenile Hurdle at Leopardstown at Christmas has been given an entry by Joseph O'Brien and raceday sponsor, owner Chanelle Pharma Ltd.

Mullins can also count the unbeaten mare Gauloise among his team of 10 while Elliott has the easy Navan winner Magic Tricks in his quartet. Paddy Corkery’s Christmas winner Master McShee is certainly worthy of his inclusion as are Noel Meade’s pair, Cask Mate and Hes A Hardy Bloke.

Faugheen led home a 1-2-3-4 for Willie Mullins in the Grade 1 Flogas Novice Chase last year and the impressive Monkfish is one of six entries from Closutton in the latest renewal.

Fellow Grade 1 winners Colreevy and Franco De Port are also entered by the champion trainer while the season’s other Grade 1 winning novice chase Envoi Allen is one of five entered by Gordon Elliott who also has Pencilfulloflead and Andy Dufresne in the early line up.

Tim Husbands, CEO of Leopardstown Racecourse, said, “The strength and depth of the initial entries for Dublin Racing Festival is first-rate, this festival has established itself as a major part of the National Hunt season and we are very grateful to everyone who supports it.

"We look forward to the fourth renewal of Dublin Racing Festival in February which promises to be a thrilling sporting event.”