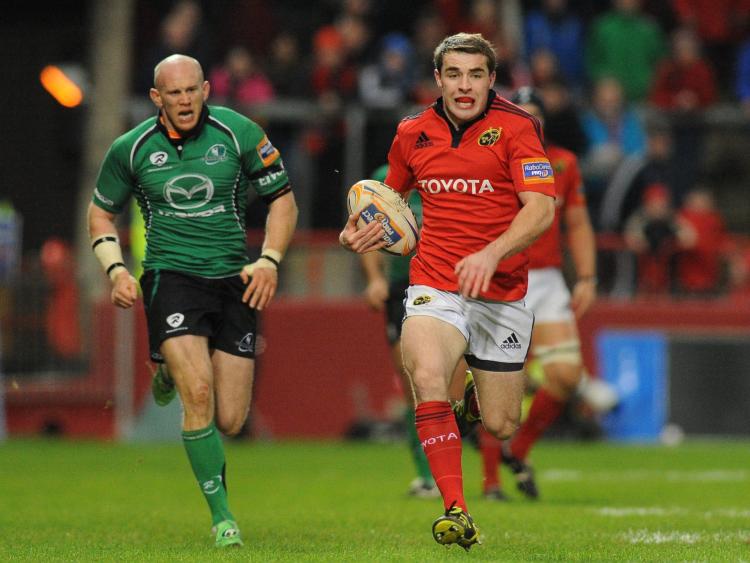 Munster's Sean Scanlon gets away from Johnny O'Connor, of Connacht, in their PRO12 fixture at Thomond Park in 2011

Scanlon made a PRO12 try-scoring debut for Munster in December 2011 against Connacht, and was also part of the province’s 2012 British & Irish Cup winning squad.

Ear-marked as a special talent from a young age, former Garryowen player Scanlon spent two seasons in Munster’s Sub-Academy after leaving Crescent College Comprehensive, before moving onto training and development contracts with the province.

The full-back has been most recently playing with Nottingham Rugby in the Greene King IPA Championship. However, Covid-19 has disrupted the competition with the 2020/21 season not set to commence until the weekend of March 6.

A few words to mark the end of my pro career and some highlights from my time in the Champ. https://t.co/gG63lJfueH pic.twitter.com/INrILok21S

Confirming news of his retirement on social media, Scanlon wrote: "After 11 years as a professional rugby player, the time has come to hang up the boots.

"Covid brought an abrupt end to the journey, but it's one filled with incredible memories. The highlights of playing for my home club Munster, representing Ireland U20s, promotion play-off games, epic bus journeys and socials and making lifelong friends, all of which I will deeply cherish.

"The Championship truly is a special place. The battles, both on and off the pitch in the Wild West, build resilience and humility.

"It was a privilege to have represented three great clubs 156 times, Nottingham Rugby, Rotherham Titans and Doncaster Knights. Thank you to the physios, S&C staff, kitmen, fans and volunteers.

"To all the coaches who I learned so much from and inspired me to begin coaching, thank you.

"It was an honour to play for Crescent College, Garryowen FC, UCC, Cork Con and Munster Rugby who helped me grow from schoolboy to pro.

"To my family and amazing wife Lesley, thank you for all you encouragement and support. I look forward to staying involved in the game with Dronfield Rugby.

"A career I can look back on with pride and gratitude for the enjoyment, friendship and memories."