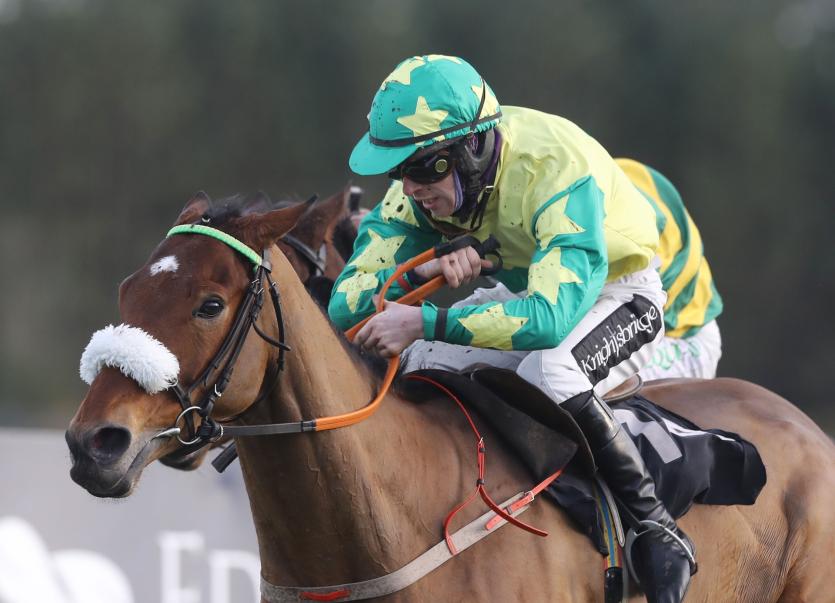 It was a first career winner for the Listowel conditional rider who brought the 16/1 chance home a six and a half-length winner from the Ross O'Sullivan-trained Theatre World.

Bruree-based Bolger was a winner again at Limerick on Wednesday where he landed the Earl Of Harrington Memorial Hunters Chase with Staker Wallace.

A 4/7 favourite under Barry O'Neill, he was in front at halfway and easily accounted for the Eugene O'Sullivan-trained 7/2 shot, his main market rival, by a length and three-parts.

Athea trainer Eoin McCarthy notched up a hat-trick of wins with the Denis Enright-owned Mattie’s Mountain in the two-mile three-furlong handicap hurdle at Limerick on Tuesday.

Completing a double on the day for Gearoid Brouder, the 7/1 chance stayed on well to see off Charles Byrnes’ gambled-on 13/8 favourite Pairc Na Ngeal by two and a half lengths.

McCarthy and Brouder were back in the winners’ enclosure the following afternoon where Moonlight Glory took the two-mile handicap hurdle.

The 5/2 chance battled well to beat the Henry de Bromhead-trained Alice O’Byrne by half a length in the colours of owner Saorcha Fitzgerald.

The final race of the Limerick Christmas Festival went the way of Charles Byrnes who saddled Blazing Khal to win the day’s bumper.

His son Philip was in the saddle as the 7/2 shot relegated another Henry de Bromhead-trained runner, this time 15/8 chance Grady Hollow, into second place with the Emmet Mullins-trained 11/8 favourite Noble Yeats back in this place.

Croom trainer Andrew McNamara was among the winners at Tramore on New Year's Day where Lessofdnegativity battled well to land the two-mile five-furlong handicap hurdle.

Owned by Michael Fay and Henry Lappin, the 10/1 chance saw off the James Dullea-trained Satin Sun by half a length under Darragh O'Keeffe.