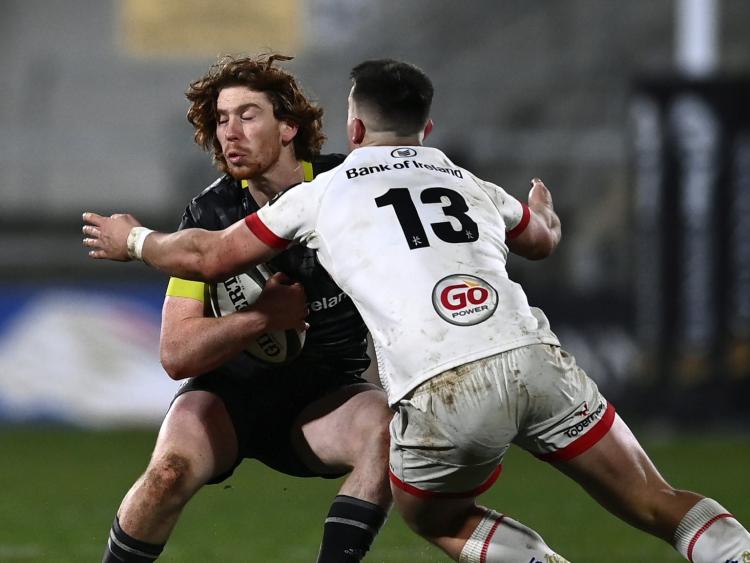 A MUCH-CHANGED Munster side lost their unbeaten record this season, but picked up a deserved losing bonus point late on as high-flying Ulster prevailed 15-10 in their Guinness PRO14 interprovincial derby at Kingspan Stadium on Saturday night.

Munster, with 14 changes from the side which stunned ASM Clermont Auvergne in the Heineken Champions Cup in their previous outing, battled bravely in the second half and their endeavour was rewarded when a late Darren Sweetnam try, converted by debutant Jack Crowley, ensured they return from Belfast with a bonus point.

Indeed, Munster kept Ulster scoreless in the second period as their youthful replacements made a significant impact off the bench in the derby clash.

The losing bonus point sees table toppers Munster enjoy a nine-point lead over Scarlets at the summit of Conference B.

However, Munster have won only one of their last six fixtures with fellow Irish provinces ahead of next Saturday's visit to Galway to take on Connacht at the Sportsgound, 7.35pm.

Ulster, who have now won all 10 of their Guinness PRO14 fixtures this season, deservedly led 15-3 at half-time at Kingspan Stadium, thanks to two well-executed tries.

Ulster have not been defeated at Kingspan Stadium in the PRO14 since Connacht were the visitors in
October 2018.

Munster, whose last win in Belfast was in 2016, were playing their first fixture in two weeks as their scheduled St Stephen's Day clash with Leinster at Thomond Park was postponed.

Shane Daly was the only survivor for Munster from the trip to France to face ASM Clermont Auvergne prior to Christmas.

Munster's starting line-up included hooker Niall Scannell and winger Liam Coombes who were making their first appearances of the season, while Academy out-half Ben Healy who successfully rehabbed a shoulder injury sustained against Harlequins to start in the number 10 jersey.

Prop Dave Kilcoyne was introduced in the third quarter to make his first appearance for Munster since injuring his ankle against Leinster in August at the Aviva Stadium.

Academy out-half Jack Crowley, from West Cork, made his Munster debut when sprung from the replacements' bench in the second half.

Munster trailed 3-15 at half-time in Belfast, with the home side full value for that lead.

John Cooney kicks the conversion from the touchline.

Ulster ran in two tries during that opening period. The first try arrived after just eight minutes when Munster's defence was carved open.

Off a line-out on the lefthand touchline, centre James Hume found Jacob Stockdale with a delightful pass. The Ireland international, operating at full-back, in turn passed to Matt Faddes who dotted down in the corner.

Munster hauled themselves right back into the contest four minutes later when out-half Healy slotted a penalty goal for 5-3. That score came on the back of a concerted period of pressure from Munster which featured some excellent ball retention and phase building.

However, Ulster quickly pushed their advantage out to seven points.

The home side was rewarded for attacking with great width when, after the Munster defence was sucked in, influential out-half Billy Burns found Ethan McIlroy with a delightful crossfield kick and the winger had the simple task of dotting down.

Cooney's successful conversion made it 12-3.

Dan McFarland's side then moved 12 points clear on the half hour mark after Cooney kicked his first penalty of the game.

The home side maintained their 12-point lead until half-time.

The opening 19 minutes of the second half failed to produce a score. Munster were dealt a blow when captain Billy Holland was yellow carded just before the hour mark as the visitors coughed up a number of penalties inside their own '22.

Ulster went to the corner with the resultant penalty but Munster's defence held resolute and flanker Chris Cloete won a penalty at the breakdown.

"Kicking off 9 & 10 - they've got experienced half-backs but we have the young guns!"

Despite being down a player, Munster had the chance to add to their points tally in the 63rd minute, but Healy was off target with a penalty attempt.

However, to their credit resilient Munster remained well in the contest inside the closing 10 minutes as the experienced Holland returned from the sin-bin.

Munster pushed hard to gain at least a losing bonus point from the contest as the clock ticked towards full-time.

Replacement prop Roman Salanoa was deemed to have been held up just short as he desperately tried to get over the tryline from close range.

Ulster's Academy front row forward Callum Reid was sin-binned for infringing after Munster's scrum powered its way towards the tryline as the clock ticked into the red.

Munster picked up a losing bonus point at the death when Darren Sweetnam crossed for a well-merited try. Debutant Crowley added the conversion for a 15-10 final score.