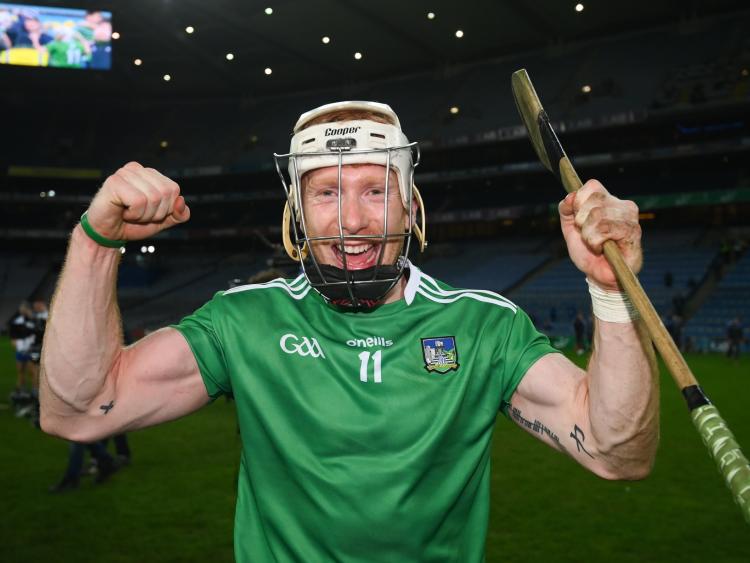 ALMOST an hour after the final whistle in Croke Park Cian Lynch took a moment to reflect in the victorious dressing room under the Hogan Stand.

Foremost in his thoughts was his uncle Paul Carey - buried just one month previous following an accident in Dubai.

"I am very into my faith so I believe Paul is with us and everyone else that we lost are guiding us and giving us strength," Cian Lynch explained.

His uncle Paul was also a hurler of note - captaining Patrickswell to a 2003 Limerick SHC title when a young Lynch was team mascot. Carey also played minor, U21 and senior in the green and white of Limerick.

"In the dressing room there was a bit of music on and I took a moment to look around. It does put everything into perspective, when you would be worrying about the smallest of things," said Lynch.

"Hurling is unbelievable but at the end of the day life is everything. My family were struck with death but there were other families in our group that lost close family members and across the country with the coronavirus and people weren’t able to go to funerals or send their condolences and it’s important to remember those people and those families."

He continued: "That’s why the GAA is huge, during our time of the funeral Limerick GAA and the GAA club were a massive support and other counties showed great support".

"The year 2020 has been very hard for every family whether you were affected by the virus itself or not but it has run through every household be it someone you know or someone that died from it. For us, we are just grateful to be able to bring enjoyment to families and the people of Limerick and not just Limerick - to bring a bit of joy and happiness to households," he said.

"We were just so happy and grateful to be able to get out of the house - there are plenty people around the country confined and isolating due to their own health risks so we want to dedicate this to those people and the sacrifices that they are making so that we can go out and do stuff like this."

Lynch stressed that Covid-19 guidelines need to remain central to all.

"We were lucky that we all got through it but we know that we are not over this virus yet and have to be extra vigilant."

He explained: "Even afterwards lads didn’t want to get carried away because the worry is still there and the fear - delighted to be able to get through and go home with what we came up for and to be able to go home to our mothers and fathers and families and to see how they react because it was hard not having them here today. We all had family that would have loved to be here - the telly is probably broken at home! The last time we were here my mother was out on the pitch and to not have them here today is a strange feeling but we have eachother".

The Patrickswell star said that the bound within the 36 strong panel of players and 21 strong list in the backroom team has strengthened during this 2020 championship.

"We had to be selfish at times because what you do would affect the lads inside in the Limerick set-up - we have all been holding ourselves responsible and accountable for the team and our families. We couldn’t socialise with our other friends because we had to stay in our bubble. We had 36 of us there and the management team and backroom team and we just enjoyed being in eachothers company for the last few months and that’s all we had."

"This is great - class," he beamed when asked of his immediate feelings of another Liam MacCarthy title win.

"That’s what it is about - every team is training as hard as they can to try and get one up on eachother but we just stuck to our process and stuck to each other and just embraced each other because that is all that we have had over the last four or five months because that’s all we had - 36 lads going training. Christmas has come early for us and for Limerick and Thank God for that.

"Limerick supporters are the best - not only in Ireland but in the world in our eyes. This morning we were getting on the train and there were people lined up, all wearing their masks and doing everything right. Even when we arrived in Dublin today we saw cars with flags - that’s what is so special and important with the GAA. It’s about camaraderie and community spirit and not only in GAA households but in Limerick city - bringing people together at a time when it’s hard to be in eachothers arms. It’s a lovely sentiment to be able to leave here today and while we physically can’t bring Liam (MacCarthy Cup) with us but to have that for us is something."

And thoughts were also turning to 2021 as the interview progressed!

"Any player wants to win as much as they can and win every game but it’s not possible to think that you are going to win everything for as long as you are planning. For us we just focus on it week by week. We will enjoy these few weeks and enjoy Christmas because it has been an immensely draining year and not only for us but everyone in the country under constant worry and paranoia," he said.

"Experience is huge but the way we look at it is there is no point looking to the past - if we focus on 2018 or what we did there we would never move forward or push on. Our way of looking at it is not to dwell on what happened yesterday and move on to tomorrow and see what we can bring to make the best of ourselves and the team. You don’t rest on your laurel and be known as a team that just won one All Ireland back in 2018 - for us it was always about testing ourselves and moving on and embracing the next challenge. There is no point heading into 2021 and resting on this and thinking that’s enough - we want to keep driving on and keep pushing eachother."